Priest Gets First-Ever PhD in Snowboarding 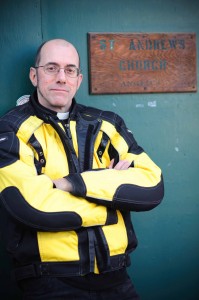 At a glance, each of the words contained in this post’s title may not be all too special. Priests are pretty common, many people snowboard and there are a decent amount of people with a PhD floating around the world. With their powers combined, however, they form a pretty awesome bit of news: Neil Elliot, a priest at St. Andrew’s Anglican Church, is the first person in the world to receive a PhD in snowboarding.

Dished out from Kingston University in London, Elliot’s rad PhD journey began when he discovered the term “soul-riding” on the Internet, which supposedly refers to having transcendent, spiritual experiences while snowboarding.

Elliot’s boned out thesis doesn’t prove any direct connection between spirituality and a 5-0 grind, but he believes there’s a connection nonetheless:

My thesis goes on to say that there’s three dimensions to that. There’s the experiences that we have, there’s the context that we’re in and then there’s what’s going on really inside us, who we are.”

How do Elliot’s congregation and colleagues feel about all this? Apparently, they understand:

(CBC News via The J-Walk Blog)