The Pride Sips Kickstarter Is Bringing Us Queer Soft Drink Pillows for the Summer! 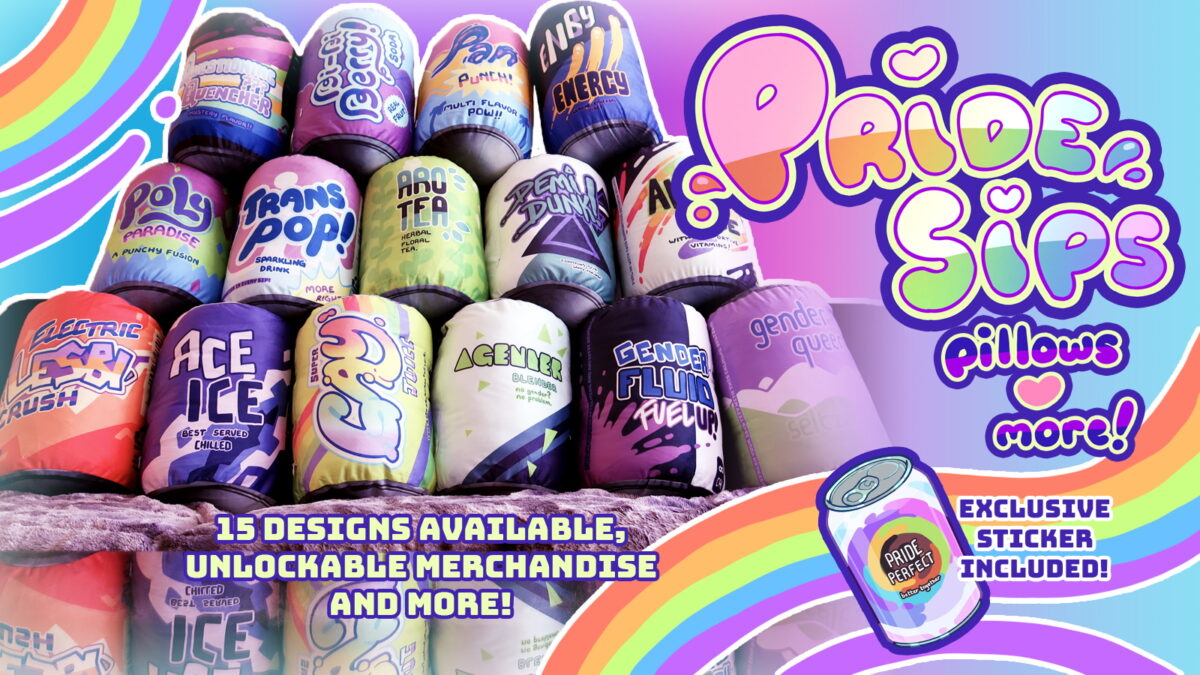 As we all know, the creativity of the queer community continues to do a number on my wallet. Such is the case with Pride Sips, a Kickstarter from toy and game designer Tori Apiradee. The Kickstarter will fund a collection of 15 queer-themed plush made to resemble soft drinks that make me think of some mystical road trip pit stop where the cooler is lined with cool, gay beverages. 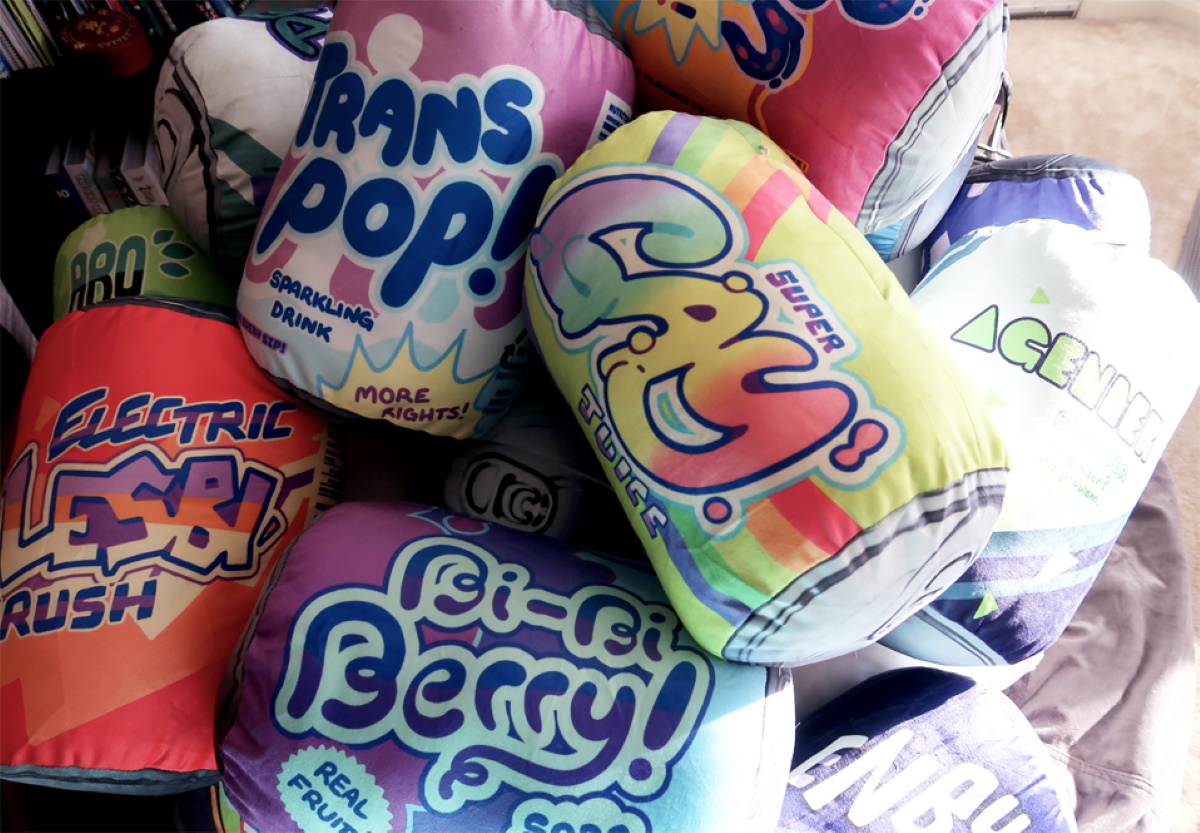 Each drink has its own brand name, slogan, and a reminder to recycle. There are even nutritional facts and a barcode with Apiradee’s artist name (Toripng).

Here is a list of all the drinks you get to choose from: 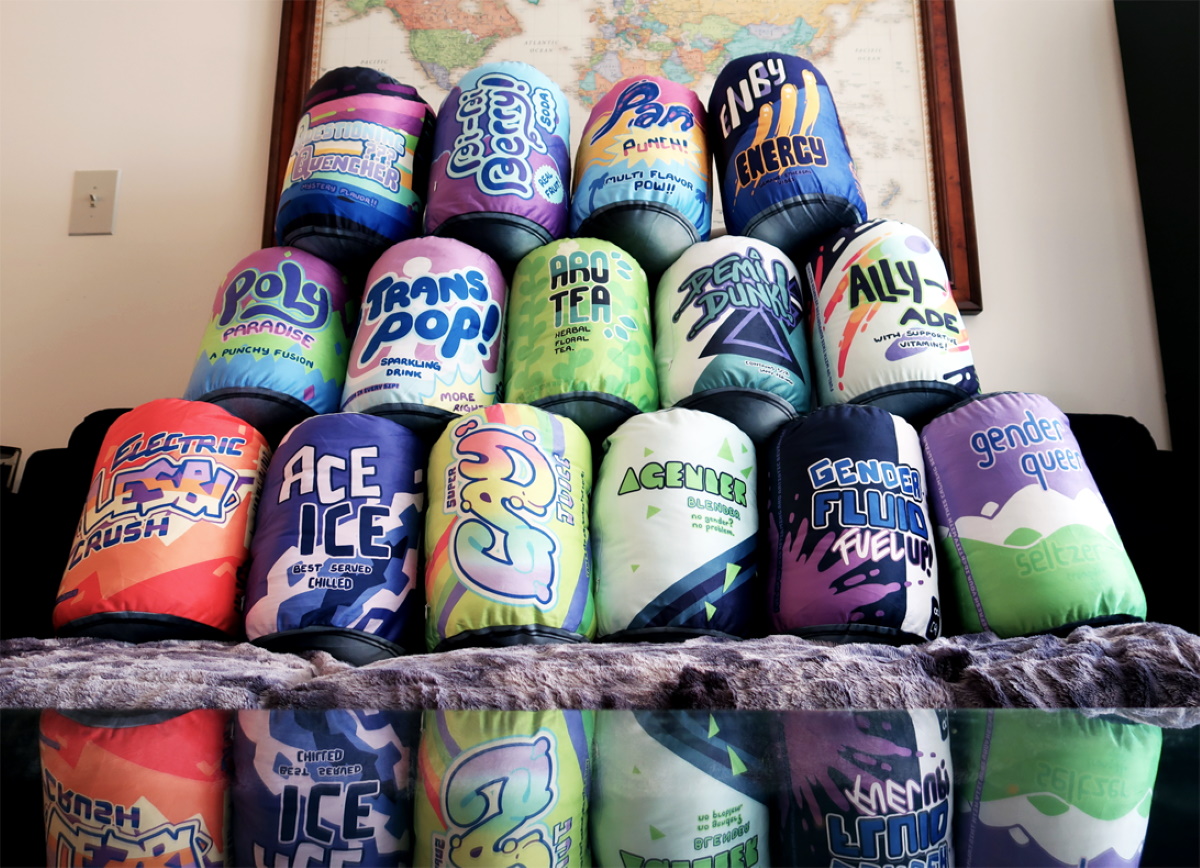 Initial funding will go toward the production of the pillows with stretch goals going toward creating more Pride Sips merchandise. This includes keychains, enamel pins, stickers, and to my delight, recipe cards. The first thing that came to mind when I saw the pillows was wondering how to go about making these drinks in real life. The recipe cards for each drink (assuming that stretch goal is reached) have a list of ingredients and directions on how to make a single serving.

This, to me, is a fun way to incorporate the drink theme of Pride Sips, and for the adults in the room, there’s an alcoholic option (at least in the Super Gay Juice example).

I reached out to Apiradee to ask what inspired him to create such a fun Kickstarter campaign. He had this to say:

“I wanted to create something fun and lighthearted that could be easily enjoyed while still being excitable. The pillows idea sparked from the idea of the original drawings coming into 3-dimensional space. Would you share one of these cans with a friend? That sort of thing. With them being turned into pillows, you can surely throw one at someone with minimal consequence.”

I do get the share with a friend vibe from this campaign. I feel like I’d open a 12-pack of Bi-Bi Berry Soda and marathon an unreasonable amount of anime if I could. Since these are being made into pillows I can, as Apiradee says, throw one at someone with minimal consequence.

The ensuing pillow fight would be worth it.

When speaking about the text on each can, Apiradee said, “The text included on the mock product layout makes references to some flag color meanings as well as other community-related qualities of each identity. I put a little bit of sentimental feeling into each so it started to become a bit personal when I was creating the designs. I tried to give my all with both artwork and heart.”

The call for more rights on the Trans Pop and messages of, “No gender? No problem,” on the Agender Blender definitely speaks to this. There are also a lot of messages of love, validation, and all-around positivity toward the queer community. While I personally want to snag a Bi-Bi Berry Soda for myself, I adore that there’s a Questioning??? Quencher for anyone who isn’t sure. A lot of the community is represented here and I’m happy that Apiradee made room for those who are still exploring.

You can check out the campaign right here!