Preschool Bans Kids From “Super Hero Play,” Doesn’t Even Have the Decency To Do It With Proper Grammar 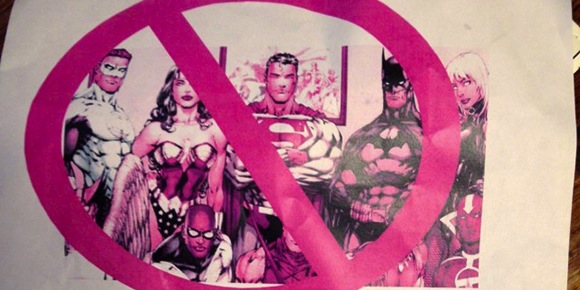 By now you may have seen the picture floating around of a flyer distributed by an unnamed preschool that has banned “Super Hero play.” If not: Yes, there is such a preschool. Apparently kids have been getting a little rowdy there lately—which is absolutely a problem that should be solved—so the school decided, hey, instead of addressing the violence issue, let’s just say they can’t pretend to be superheroes.

The letter, with my commentary, is behind the cut. I am unable to can with this one, folks.

After the delightful header image, above, the letter starts:

PARENTS WE NEED YOUR HELP!

Does the help you’re requesting relate to proper comma usage?

That’s the premise of a dystopian novel if ever I’ve read one.

causing injuries within our pre-k community. Although we encourage creative thinking and imaginary play, we do not promote out [sic] children hurting one another.

That’s fair. No objections from me.

Wrestling, Super Hero play, and Monster games will not be permitted here at [REDACTED].

The wrestling’s fair, assuming the wrestling they were doing was actual fighting and not jumping around in luchador masks. But superheroes and monsters? Is playing cops and robbers (kids still play that nowadays, right? I played Thundercats.) any less likely to end in bloodshed than Avengers and Chitauri? Seems to me the school should be focusing less on the subject of the games their charges play and more on their content.

In addition please monitor the different media that your children may view.

Glen at Geekosystem wrote extensively on this particular gem, namely how screwed up it is that the school appears to be asking parents not to let their kids consume superhero stories at all.

The re-enactment of televisions shows/ movies are being done during active paly times in school. [sic for this entire sentence.]

Again, if that reenactment results in injury, that’s a problem. But why pick on superheroes? Shouldn’t the school employees be keeping their eye out for fights on the playground and dealing with those instead of saying “no superheroes.” Ditto with monsters. If my hypothetical child were playing vampires vs slayers and stabbed a fellow student with a pencil I would want the school to take action and let me know “Hey, little Buffy’s gotten out of control. Here is what we did, and this is what you need to do.” But sending a note home saying “kids can’t pretend to be zombies” is a bit much.

The safety and well being of your child is our first and foremost concern. Thank you for your cooperation.

Aaaaand we’re back to dystopia territory. This pre-school brings a whole new meaning to the term “nanny state.”

The image has gone viral since it was posted to reddit a few days ago, and hopefully the attention paid to it will cause the school to rethink their policy on make-believe. Otherwise… look, I’m not saying the ghost of Mister Rogers will haunt the administrators for the rest of their days, but that’s only because Mister Rogers is far too polite for that. But Fred would definitely be disappointed in them. For shame, unnamed school. For shame.