Prehistoric Flowers Trapped in Amber Hold Each Other in Eternal Loving Embrace, at Least That’s the PG Version

No one tell Jeff Goldblum. 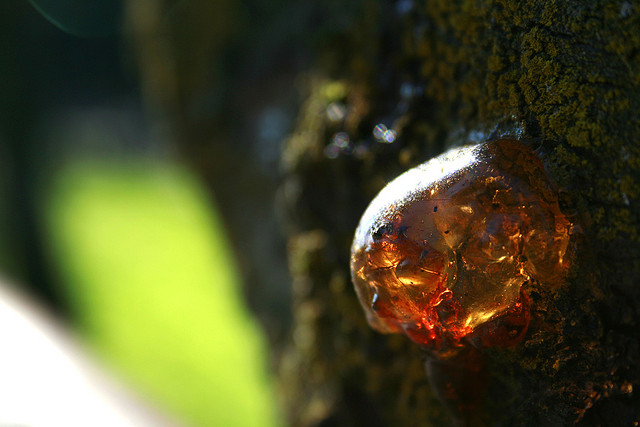 A recent find in a Myanmar mine is giving scientists (and hopefully not amusement park tycoons with a God-complex) unprecedented insight into the Cretaceous Period. It’s also giving them insight about the sex lives of long extinct species of flowers. You know, normal, every day science stuff.

The discovery of a new genus and species of flowers remarkably well-preserved in amber and dating back 100 million years to the Cretaceous Period is eliciting excitement in the scientific community. Not only are the eighteen specimens representative of an entirely unknown and now presumably extinct species, but one flower was captured mid-reproductive act, with the pollen tube still entering the stigma. In other words, readers, this flower was getting it on.

Science is excited not just to see what the newly-named Micropetasos Burmensis looks like mid-bone, but because the specimen is the first preserved act of Cretaceous pollination to be found. However, researchers at Oregon State University have inferred from the condition of the preserved pollen that…

What? Oh, sorry, I got distracted thinking about Jurassic Park and flower sex.

In sincerity, though, the remarkable series of events required to preserve Micropetasos Burmensis is just another reminder that science in general is awesome and the Earth is a very, very old place, no matter what your creationist Grandma thinks.

(via www.iflscience.com, image via Guy Fawkes)