Because why would anyone want an important fossil find to be in a museum, where it could be studied? It belongs by rights to the wealthy, because they are better than us. 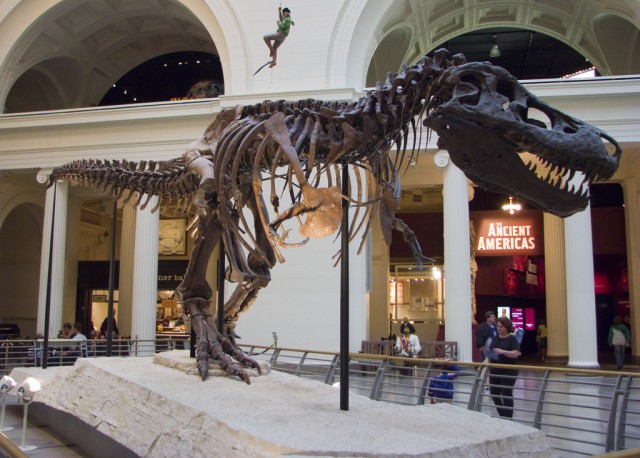 A pair of fossils discovered in Montana — a T-Rex or close relative and an unidentified triceratops relative — could potentially teach paleontologists a great deal about their respective species. Since they’re going up for auction later this week, though, there’s a real possibility that researchers will never even get to see them.

The pieces, which could help to clear up questions about the T-Rex life cycle or end doubts about dinosaur speciation, will be sold off to the highest bidder in an auction at Bonham’s in New York later this week.

Now, it’s possible that a museum — with no doubt a lot of help from corporate benefactors — could step in and purchase these remarkable fossils. And it’s possible that a private buyer could win the bidding, and then selflessly donate the find to a university or museum that would see the proper work done on it. Those are both things that could happen, and they’d be happy endings to the story. But what’s also possible is that a fossil that should be contributing to our understanding of the Earth’s history, or at the very least increasing the public’s appreciation for that history on display for everyone to see, will instead languish in some rich asshole’s study. Though considering the size of the specimens, it would have to be one hell of a large study.

That a potentially historic find could simply vanish into a private collection, disappearing into the hands of an anonymous donor and being lost to researchers forever, because someone wanted to make a buck is unconscionable. That this is even a thing that could happen is to our grave discredit. That it’s reasonably likely to be the outcome is stomach-turning.

I say potentially historic because we don’t know if the fossils are as remarkable as their discoverers claim or not. That’s because independent researchers have had little opportunity to study the fossils properly, and they may never get that chance. Evidence suggests that the two dinosaurs could have died in battle with one another, but we don’t know that. And since the prospectors who found them are businessmen, not objective researchers, their claims about what the placement of the fossils means have to be taken in context. That’s not to say they’re wrong, or that they’re lying. It is to say that they have a horse in the race, and any claims they make about the “Dueling Dinos” have to be viewed through that lens.

To be fair, we should note that the prospectors involved have offered the items for direct sale to several museums. To be accurate, we should note that they did so at greatly inflated prices. According to the New York Times, the Smithsonian was informed that it could submit bids privately starting at around $15 million. When the fossil goes on the auction block courtesy of Bonham’s, they’re expected to fetch up to $9 million, which would break the current record of $8.36 million that the Field Museum — with the assistance of a vanguard of corporate sponsors — paid for the T-Rex “Sue” in 1997. The unspoken message to museums is clear: You can prevent these fossils from going into private ownership. Just pay prospectors through the nose for them. Otherwise, well, who can say what might happen?

For good or ill, the law of the land says that fossils found on private land are private property, and that’s not likely to change any time soon. And with that being the case, it’s hard to blame the prospectors. While some may find their work unseemly, there’s little doubt that it’s perfectly legal, at least in the case of the prospectors involved in this dig — though not all prospectors are even this upstanding, a problem explored in some detail here. And say what you will about their ends, but these prospectors are at least interested and skilled dinosaur hunters.

As for the bored and wealthy folks with more money than sense who buy pieces like this to fill out personal collections away from the prying eyes of the hoi polloi — or worse, just want a new neat toy because they don’t have one yet and they have the cash to throw around — well, what can I say? Either they don’t realize that their greed is damaging to scientific research, or they just don’t care, because hey, they’ve got theirs and the hell with the rest of us. To that sentiment, we issue a resounding “Same to ya.”

Note: The image used to illustrate this story is of Sue, the T-Rex fossil purchased by the Field Museum in 1997. That’s because the photos of the excavation site on DuelingDinos.com are all subject to copyright. Because hey, wouldn’t want just anyone looking at what should by all rights be a piece of natural history heritage, right?