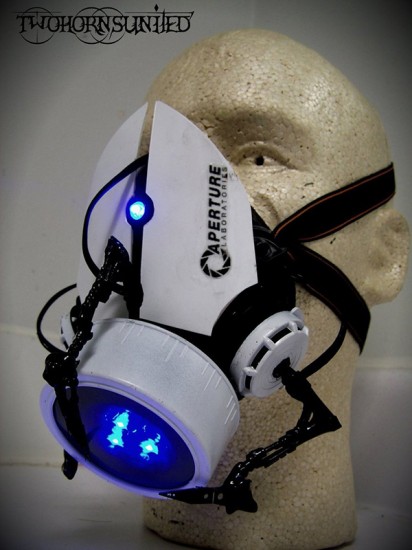 If you want to survive when a disgruntled coworker decides to flood the office with a deadly neurotoxin, you’re going to need a gas mask, or a new job. This Portal gas mask, or more accurately half-mask air purifying respirator, looks like it might just be the thing for the job, but it isn’t. Made by Brian Cargile, or TwoHornsUnited on DeviantART, the mask is 100% decorative, but still 100% awesome, especially if you like dressing up in black and dancing to Vogue.

If you think the mask is really awesome — like, really awesome — you could try to buy it. Cargile has plans to sell the mask at the Tampa, Florida Metrocon this coming June. It’s not exactly cheap though. Cargile is thinking of setting the price at around $280, a lot for a respirator that doesn’t actually work. While this particular mask is one of a kind, Cargile does have plans to build other improved Portal masks in the future, so hopefully we’ll have more to salivate over then. In the meantime, I’d recommend avoiding deadly neurotoxins, no matter how cool gas masks might seem.