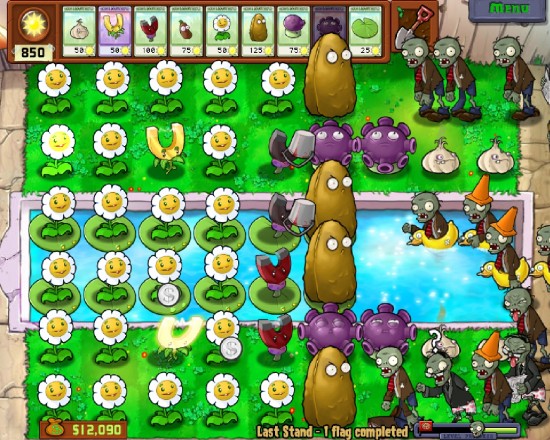 PopCap Games still kind of owns when it comes to the casual and mobile spheres. The company, now owned by Electronic Arts, has managed to build a deal of goodwill with video games like Bejeweled, Zuma, and Peggle. They’ve announced that a sequel to the much beloved Plants vs. Zombies will be shambling its way to release next year “by late spring.” Gird thy loins, the zombies are coming.

The press release is somewhat surprisingly sparse on details. No platforms are mentioned, so it’s unknown exactly where it will be available, and the only confirmed points seem to be that it will be both new and include new features, situations, and settings. So, basically, a new game in the franchise is coming and that’s essentially all we know at this point.

They do include some amusing quotes from some of the game’s characters in the press release though:

“Spring is crullest curlie ungood time, and plantz grow dull roots,” noted an unidentified spokesperson. “So, we are meating you for brainz at yore house. No worry to skedule schedlue plan… we’re freee anytime. We’ll find you.”

“There was a time we relished a bracing, hearty blend of zombies, in the morning,” said Sonny F. Lower, a representative of the Flora Forever Foundation. “But first, a brisk shower and some strategic pruning are required. Tomorrow is near!”

Time to rev up the anticipation engine! Even if it’s more of the same, fans of the original are liable to eat it up and ask for more — which isn’t necessarily a bad thing. More of what many considered to be a great game might not be innovative, but it can certainly be satisfying.