Toy-Themed Cover Triumphs Over 2020, Is Our Collective Mood

I know it’s April and 2020 ended, like, yesterday or whatever, but it’s still hard to believe that such much HURT happened at the start of the decade.

To the entire world.

That’s why when I see images of triumph in regards to making it through all that 2020 had to offer, it puts a smile on a face, especially if it’s an image that embraces fandom. It’s not an understatement to say that fandom served as a major coping mechanism last year. If I wasn’t watching or reading something, I was combing through social media for some kind of positive post about a character, a cosplay, a ship, anything that would lift my spirits.

Apparently, the folks over at Pop Insider share my sentiments.

The magazine was launched back in 2018 and is described as, “A multimedia publication that lets superfans fuel their fandoms 24/7 with the content they crave through a daily pop culture news and review site, weekly e-newsletter, seasonal print magazine and ezine, and real-time social media updates.” For their spring issue, appropriately titled Heroes Rising (not to be confused with the most excellent My Hero Academia movie), the cover features iconic toys standing triumphantly atop the charred remains of 2020. 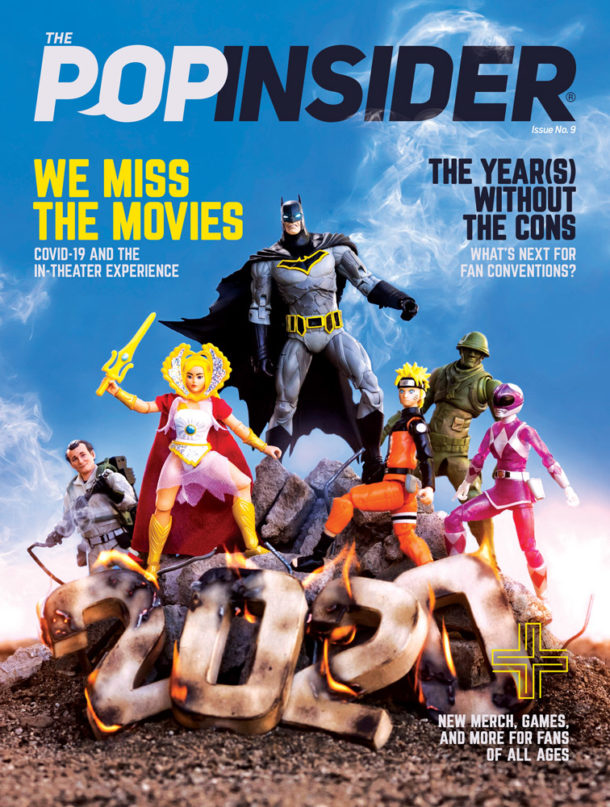 This isn’t the first time the magazine has commission toy photographer, Mitchel Wu. I recognize Wu’s work from this Plus Ultra My Hero Academia shoot, but he also did a cute Mandolorian cover and a vibrant holiday gift guide for the magazine that captures the world I thought I was creating when I played with my toys.

For the Pop Insider spring issue, which talks about the in-person events we, as nerds, miss (conventions and going to the movies, for example), the choice to have toys from our favorite franchises looking like they won a major battle hits me in the feels. Sure, we’ve missed out on a LOT of our regularly scheduled fandom favorite things, but somehow, fandom managed to adjust and keep moving forward.

Like. Naruto is one of the toys in the picture, and it just reminds me that anime is STILL going, on a weekly basis, and the community is still very active.

In an interview with the magazine, Wu had this to say about the cover. “I was really thrilled to create this image because I knew it was a theme most of us could relate to. And I always have a wonderful collaboration with the team at the Pop Insider. Marissa Dibartolo, co-editor-in-chief of the Pop Insider, and I always have a fun back and forth on ideas, playing with a variety of different themes and concepts until we arrive at something amazing. For this image, we wanted an image that communicated the power of working together to triumph over monumental challenges, which 2020 was for most of us.”

That explains the choices in what toys were picked for the cover, at least it does to me (besides the obvious “yes I have several fandoms in my inventory slot”). A lot of these characters are either part of a team, are part of a series with a strong message of friendship and bonds, or can understand that, sometimes, the best way to handle a crisis is to stand together as one. Wu could’ve easily picked an existing team of heroes, but he felt it was best to mix up the fandoms to show how, even if we’re all different, we can (and should) come together.

“I love that every character used in this image is so incredibly different from the next. I think it symbolizes and illustrates perfectly how, even though we are all so different, we can come together during an incredibly challenging time to solve almost any problem. It’s cliche to say we are better and stronger when working together, but it’s also true! I think the characters all work together in this image because, well, they are all working together, so to speak. But more to your question, the theme, the composition, and the environment really binds them together.”

Wu goes on to say that most of his images are based on current events, but he chose to address them in a lighthearted way because this is toy photography, after all. That, and sometimes, when things are so bleak, you need to see Batman recruiting a new kind of Justice League that includes a ramen-eating teenage ninja in orange and black. Wu’s Instagram is truly a delight, filled with fun images that really embrace the power of imagination. But there are also the images that clearly speak to 2020, like the toilet paper shortage, and you suddenly realize that, yeah, that really did happen, didn’t it?

And, somehow, we made it.

“I much prefer the optimism and hope that I and others are feeling today,” Wu says, concluding the interview with, “Good riddance to 2020!”

He’s right and he should say it, or rather, he should photograph it.