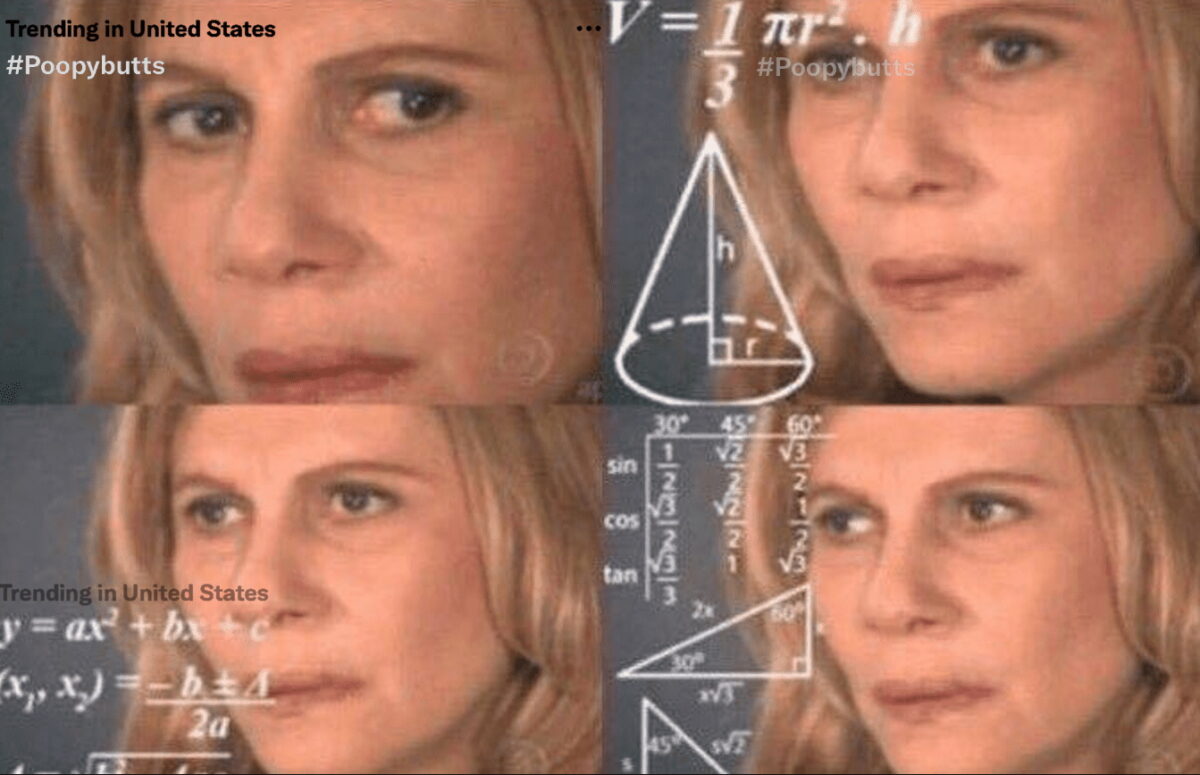 My Twitter feed often rides the line between “bless this fandom,” “absolute cesspool, must walk away now,” and “what the hell is even happening right now?”

This story is about that third thing.

Because Cesspool Twitter is no fun to write about, those moments when someone or something is trending that reminds you that life is too short and you’re already trying to navigate through its bullshit. Arguably, there is always at least one thing trending from that particular camp, but on a good day, you’ll see something else trending that offsets the stress in favor of, oh I dunno, Poopybutts?

#Poopybutts is trending and now I am convinced my 5 year old has acquired a Twitter account and somehow gained a million followers.

Like all good nonsensical hashtags, it’s hard to figure out why such a random term is trending. It could be anything these days. New animated series streaming on Netflix. Popular brand in need of a better social media manager. It truly is a shoulder-shrug emoji moment.

Me trying to figure out why #Poopybutts is trending pic.twitter.com/YY5XhMFXBu

Is it a wholesome hashtag meant to share our furbabies? That would make sense, right? They are no stranger to having a poopy butt.

not sure why #Poopybutts is trending, and i’m not gonna bother to see why, but here’s my poopybutt pic.twitter.com/DV3sy0f20G

Don’t know why #Poopybutts is trending, and a little scared to find out. But I’ll take this moment to share my own #Poopybutts aka fluffybutt, Dodger the Golden Wiener 💙 pic.twitter.com/6hn3jfUREP

Let’s not forget the kitties.

IDK why #Poopybutts is trending, but here’s my little poo gremlin pic.twitter.com/TgwDXaUxGb

If it’s not animal-related, maybe it’s an opportunity to dunk on some truly heinous poopy butts?

This little Twitter experiment is a good testament to the power that Gail Simone possesses. You either know her for her comic book work or for the pure magic that is her Twitter account (or, if you’re like me, you say yes to all when it comes to Gail Simone). Occasionally, she’ll pose a question on Twitter that, inevitably, starts trending, or she comes up with a hashtag that, well, starts trending. Her tweets can range from fun inquiries about cartoon crushes to commentary on tired accusations of being a fake nerd girl.

I found this image on the internet and don’t know to whom I should give credit, but here it is:#Poopybutts pic.twitter.com/QjuZS7ARbo

What’s hilarious about this latest episode of “Gail Simone does a thing on the Internet” is that she made the hashtag in an attempt to prove that she can’t make absolutely anything trend.

Only to discover that, lol, yes she can.

One was #Poopybutt, a joke to show I could not make every hashtag trend. It trended anyway.#poopybutt.

I don’t know about y’all but moments like this are half the reason why I’m even on Twitter, though this might be the first time in history where there’s an actual answer to the question, “Why is [insert thing that comes out of nowhere] trending?”

#Poopybutts Ya know… People always say “DON’T USE TWITTER! IS SO AWFUL!”

But those people will NEVER experience such glorious moments like these. THIS is the REAL reason to get twitter. pic.twitter.com/jNbRWMO4oU

I’m so glad I get on Twitter to see #poopybutts trending in the United States. pic.twitter.com/k3irtYbgpU