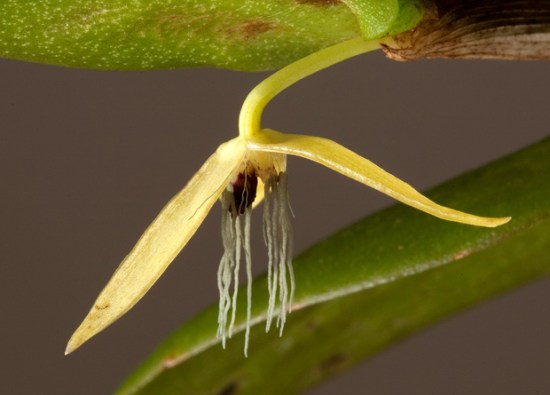 Scientists have discovered an orchid that only produces flowers at night, which die by morning. Discovered on a remote island in Papua New Guinea, out of the world’s 25,000-plus species of orchid with only a fraction flowering at night, the new species, Bulbophyllum nocturnum, is the first known orchid species whose flowers die off by morning.

André Schuiteman, botanist from the Royal Botanic Gardens in the U.K., was part of the team that discovered the unique orchid:

“The discovery of Bulbophyllum nocturnum is important for various reasons.

It demonstrates that there are still gaps in our knowledge of tropical orchids and poses interesting biological questions: Why did night flowering evolve in this particular species and not in other orchid groups? Why does this species flower at night?”

Dr. Ed de Vogel, orchid specialist from Hortus Botanicus in the Netherlands, discovered the flower in a logging area while on a research trip. He said once discovered, he was eagerly awaiting the orchid to open its buds, but by the time they reached the size that they should have opened, they withered and died.

Due to orchids requiring pollination, the team suspects that Bulbophyllum nocturnum offers something extra enticing for insects to notice it during the short span it can be pollinated, though as of yet, they aren’t quite sure what that could be.