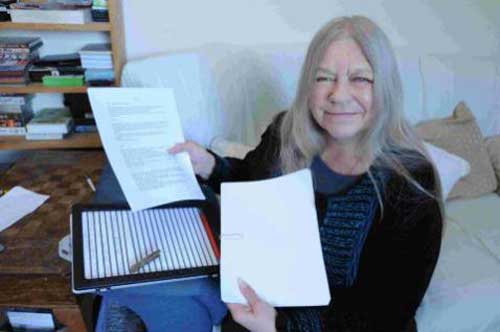 Writer Trick Vickers is old-school. When she writes, she does it long hand with regular pen and paper. But Vickers ran into a serious problem recently that would probably cause most writers to have a breakdown. She lost 26 pages of a new book she was working on. No, she didn’t leave them somewhere – her pen stopped working. Not a problem for most people but it was a huge one for Vickers. She’s blind and had no idea her pen had run out of ink. So, she got the police involved.

Vickers only realized what had happened when her son Simon came to read the pages back to her and was forced to break the news to his mom. She has a system of rubber bands that help her to keep her lines straight but nothing to warn her of this particular problem. But they had a bright idea.

“We battled with various ideas until we thought of the police. We rang them and asked to speak to their fingerprint section,” she said. “They said if there was anything they could do they would be happy to help. I was gobsmacked and so happy.”

Vickers and her son took the pages to the Dorset Police who worked on the peculiar case in their spare time.

“I think they used a combination of various lights at different angles to see if they could get the impression made by my pen,” said Vickers. “I am so happy, pleased and grateful. It was really nice of them.”

The police seemed happy as well, they told Vickers they can’t wait to read the rest of her work. “[The] book, called Grannifer’s Legacy, is about a character called Jennifer whose life implodes – she loses her job, her boyfriend and worst of all her namesake great grandmother who has always been her guide.”

She hopes to send it off to a publisher once it’s completed.