The Evolution of Pokémon Style and Fashion: Iconic Designs for an Iconic Game 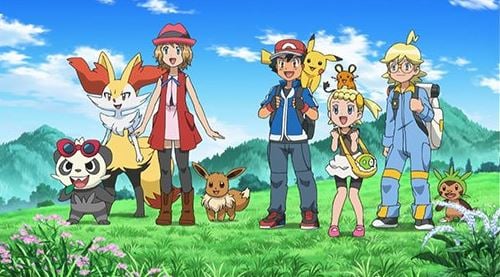 One of the most curious side effects of Pokémon Go had nothing to do with the gameplay itself, but rather the clothes that your trainer avatar could wear. Complex put together a roundup of hypebeasts immediately taking note of the game trainer’s available styles, which read as curated athleisure. Luxury men’s retailer oki-ni also put together an editorial based on the game, which isn’t the first time that an animated character has taken center stage in a fashion editorial. As part of a recent game update, there’s now a Pokémon Go wearable device connected to the game. All of this has tapped into an oft-overlooked part of the Pokémon universe: its fashion.

Of course, when most people think of Pokémon trainer outfits, they’re thinking of the now-iconic outfits from the Pokémon animated series: Ash’s hat and vest; Brock’s flak jacket; Misty’s crop top, suspenders, and shorts; the Team Rocket uniform. Though the Pokémon show continues on to this day, it’s this first generation of characters’ outfits that remain our collective fashion touchstone.

Part of this is due to the fact that the show debuted at the property’s peak Western popularity, wherein a generation of kids folded Pokémon into their regular cartoon lineup. But part of this is also due to the series’ continued focus on these characters, who have shifted in and out of the Pokémon world as their first generation of fans grew up.

The latest Pokémon games, Pokémon Sun and Moon, dropped last month and have stepped away from past formulas: There’s no more formal gym system, battles can now come in formations besides one-on-one, and notably, the game’s setting in Hawaii-esque Alola allows for reinvented, island-centric versions of familiar Pokémon. But while most of the press around the new games has centered on the monsters and gameplay, trainers have also undergone a bit of a makeover.

Easily the most exciting development for the Sun and Moon games is the ability to change your skin tone, which was also part of the draw of Pokémon Go, but the male and female-coded trainers now default sport new island-ready capris and shorts, rendered with vibrant pops of color. (As opposed to the more neutral tone, red and blue-heavy outfits from previous games.)

A scroll through Instagram’s #pokemonstyle tag mostly pulls up people mimicking the red-and-white Pokéball or cosplaying as specific Pokémon. This overlooks the myriad of fashions that have subtly been a part of the game franchise’s world, not just those of the trainers, but those of side characters like Dragon Tamer, Artist, and my personal favorite, Suspicious Woman. Of course, technical improvements in character designs allow for more detail and variation, but what’s most notable about Pokémon fashion is how much it, as a whole, doesn’t really change. The overwhelming popularity of the Ash, Brock, and Misty (as well as Team Rocket) costumes is a testament to the potential for iconography of Pokémon fashion, but the lack of canonization of other designs has to do with the game’s inherent intent.

Plenty of think pieces and reports have been written about the rise of athleisure as both business and cultural phenomenon, but over the course of Pokémon’s twenty year-plus history, the mashup of casual wear with athletic gear has been a fundamental part of the property’s world. Naturally, hypebeasts would dig the leggings-under-shorts available in Pokémon Go, but the larger Pokémon world’s fashion appeal is nearly nonexistent. These kinds of functional and relatable fashions are seemingly perfunctory designs.

Yet their relative blandness and focus on practicality compared to other video game fashion, particularly fantasy video game fashion, places the visual emphasis rightly on the Pokémon themselves. This also lets people play and see the game trainers as avatars for themselves, rather than as studied characters in their own right. (Though this attitude is changing, as seen with a recent Pokémon animated series focusing on the original game trainer, Red.)

And while players couldn’t play as a female-coded avatar until Pokémon Crystal, the series has generally been thoughtful about its female character designs. First generation sprites for gendered side characters like Beauty and Engineer have either been nixed or refined, while new categories like Sky Trainer and Roller Skater have character designs for two genders. Though female-coded main trainers have, through every generation, consistently shown more skin than their male counterparts, their outfits never get more “revealing” than skirts, a rarity in a medium not necessarily known for its considerably clothed women.

Pokémon trainer cosplay does exist, and the main trainer archetypes for each game do have their own names. But these characters serve as shells, not really meant not to distract or develop personality outside of the game. Whereas most fantasy games tend to veer toward one of two extremes—custom personalization or hyper-specific, generally unchangeable designs—Pokémon’s appeal, as it has always been, is that it’s never really about the person moving on the screen, per se.

Your character is committed to a story that values exploration over immovable end goals. So you get to possess a body that reflects your own, now more so than ever, without committing to anything other than yourself and your own curiosity within these fantastic worlds. The promise: the journey is nothing more than your own; wear whatever you want, and go.

Lilian Min writes about culture, music, and fandom. Read her work here and follow her on Twitter here.