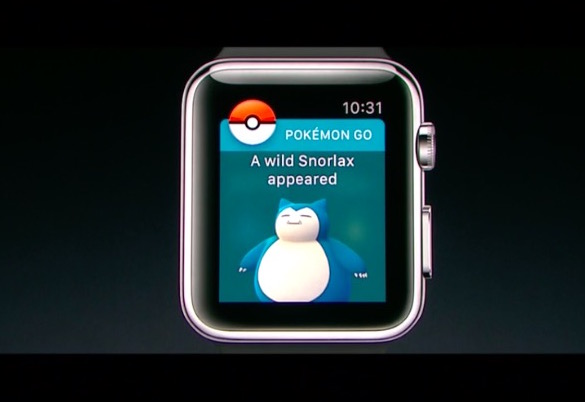 Pokémon GO is coming to Apple Watch, which is great if you own one of Apple’s prohibitively expensive smartwatches. It looks like a great way to improve the game by allowing you to give your phone a rest while walking around and playing, but the market for it is probably pretty small.

Apple’s Tim Cook said they’re very happy with the level of customer satisfaction with the Apple watch, but there’s a reason they talk about how much owners like the device more than how many owners there are. Meanwhile, Pokémon GO developer Niantic’s CEO, John Hanke, had some impressive stats for the game: 500 million downloads worldwide, and 4.6 billion kilometers walked by players. On the other hand, he skipped out on talking about customer satisfaction. (I personally still love the game, but a lot of valid criticism has led to a bad reputation and awkward reception of this news at Apple’s event.)

So, I guess the plan is to put them together! Pokémon GO on the Apple Watch will track your walking distance to hatch eggs for new Pokémon, allow you to activate Pokéstops to get items, and tell you when wild Pokémon pop up. Basically, it does everything you’d like to be able to do without having to leave your phone on with the app in the foreground, which is great, except that the Apple Watch is crazy expensive. Hanke mentioned that the standalone Pokémon GO Plus peripheral is still on the way later this month, but its capabilities are likely to be very limited in comparison to what’s possible on the Apple Watch.

If you already own an Apple Watch, though, playing this way should be a massive improvement to the game. The Apple Watch compatibility for the game is set to launch before the end of the year.