Treatment of POC & Women in Star Wars: The Last Jedi | The Mary Sue

The Treatment of POC & Women in The Last Jedi 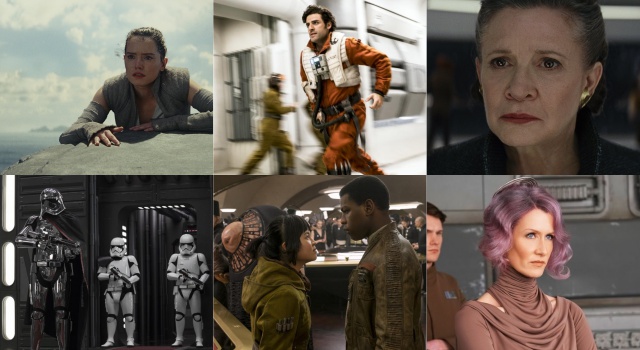 Spoilers For The Last Jedi. The Porgs Have Warned You.

A lot of criticism and praise have been flung both ways when it comes to The Last Jedi. I personally loved the movie and while I am open to hearing other people’s opinions, some of the backlash has been, for a lack of a better word, extra, from alt-right groups wanting to bash the movie because of too many brown people and too many women in charge in their space films. Or it not being the Star Wars movie “they wanted.” Yet, I think it is unfair to lump all criticism as just the rantings of white-straight male “fanboys”.

Star Wars is a huge fandom with fans across the world and of every gender, therefore it is important to listen to what they are saying when they are offering feedback on how they are portrayed.

Of the criticism about race and gender, I have seen people argue the following (1) Finn/Rose’s story amounts to nothing and therefore just bog down the film and (2) All the major women’s stories are sacrificed in favor of a man’s growth or development.

Alright, let’s discuss those and as the internet says:

I don’t speak for all black female fans in any way shape or form, I can only say how I feel about that topic from my own humble perspective.

If we are talking purely narratively, then yes I can totally see how Finn and Rose’s adventure to Canto Bight can be unfulfilling and it plays into Problem B: women’s stories being there to serve men. In a movie that is too long, this feels like the thing most instinctively to cut back. However, there was something Youtuber MovieBob said in his spoiler review of The Last Jedi that stuck with me: that Star Wars as a franchise is about “thoughts and feelings” and that this sequence is used to illustrate the inequality within the larger universe that is bigger than just Rebels vs Empire–excuse me, First Order.

There is a human element to this struggle, both in who gets persecuted and who benefits, and the lines are clear cut. The abuse those children suffer is at the hands of both sides of the war. One of the things that I have always found curious is that the Rebels are fighting to bring back the Republic, but when there was a Republic, slavery was still going on as we see with Baby Vader. There was still injustice. Persecution. Why do we need a Republic and not just a better emperor? Canto Bight doesn’t answer that question fully, but it does at least address these issues.

Not to mention, the characters who get to tear up that town are Rose and Finn, an Asian woman who lost her sister to war and a black man who used to be a child soldier. That’s not an accident. Rose Tico is the first main woman of color character in the Star Wars universe who is not an alien on screen. That is not a small thing for a franchise which up to this point has spanned eight films. The sequence established Rose well, her values, how much she is willing to risk to help the Rebellion and how her goodness can inspire others, like Finn whose allegiance to the Rebels was more about not wanting to be a Storm Trooper anymore than wanting to be a hero.

I won’t sit here and pretend that Finn goes through this massive character arc, but he starts this film trying to escape to meet up with Rey and ends it willing to commit suicide in order to protect the Rebels. That is because of his storyline with Rose and how being in Canto Bight changed him for the better. It is a good character journey and the ending sequence in which those young kids that helped Rose/Finn escape are sharing stories about the Rebel forces and Luke Skywalker prove why this story exists in the universe. Finn and Rose brought hope to people and that’s the whole point of Star Wars.

At this point, I treat Canto Bight sequence as kind of like the Trench Scene in Wonder Woman. That scene isn’t “necessary” it is a big action sequence meant to solidify a bond between characters and show us how Diana wants to protect people and what her values are as a heroine. That she is willing to fight for people even when it seems helpless. Let’s not forget the same village she fought to free ends up getting merked in the third act. Does that make the scene meaningless? No. Because it wasn’t just about the plot, it was about the character’s values.

Admiral Holdo’s decision to not tell Poe her plan is going to be something people debate for years, the same way people argue about the driftwood in Titanic.

I, personally, understand Holdo’s decision to not tell Poe her plan. Poe’s reaction to her when she first appears in the film is very dismissive, his first conversation with her is to mansplain how they only have so much fuel left (something she would already have been briefed on) and let us not forget the first thing he does this movie is disobeying Leia’s orders, which leads to the destruction of all the current Rebel Bombers and the death of Rose’s sister. I would not tell him anything either. In my mind, Holdo’s quiet decision is best said by Leia: “She was more interested in preserving the light than being a hero.”

Holdo’s plan required patience and stealth and also a sense of detachment. Holdo was going to die regardless. Her plan was always to die because once the ship ran out of fuel and the shields failed she was going to get blown out of the sky. That means being able to be detached and steady course when necessary. Her concerns were probably: What if people want to escape sooner? What if someone wants to try and save her? What if instead of just staying the course people decide to fight? If Poe had just trusted Holdo the casualties would have been greatly cut and considering that she was his superior officer, that is what he should have done. But as that scene at the beginning established—Poe has authority problems even with people he trusts.

So yes, Holdo’s story teaches Poe a lesson as does Leia’s, but that lesson isn’t just for Poe. It is for the audience. Trust women and do not assume that because they are not aggressive, or quick to blow things up, or have purple hair, that they aren’t good at their jobs. War is not about always fighting to the bitter end, it is about knowing how to stay calm and retreat with a plan. Holdo’s sacrifice is a strong narrative beat and to say it only exists for Poe is limiting her story immensely. Poe called Holdo a coward and a traitor when she was always the bravest person on that ship.

Rey’s storyline has also been criticized for having too much to do with Kylo Ren and I tell you what, that I agree with. I really, really am not a fan of Reylo, so on just that level, the amount of Rey/Kylo collusion was eye-roll inducing. That being said I disagree that she is underserved as a character because as much as I dislike it–sigh–Rey and Kylo are the co-leads of this series in addition to Finn and Poe.

Kylo’s murdering of his family members aka the cast of the original trilogy is tied to his whole philosophy of “letting the past die” paired with Rey’s inability to let go of the past. Let go of the nostalgia for her parents and the nostalgia of the legend of Luke Skywalker. Her connection with Kylo Ren isn’t about Kylo Ren, it’s about her sense of self and her secret desire to be more than just the daughter of two junkies who left her and died in the desert somewhere.

Kylo is the person Rey wanted to be. The son of heroes, born with power, the keeper of Skywalker blood and it doesn’t make him a good person or even a better warrior than Rey. Part of the reason Rey wants to save Kylo is that if she can, it proves that she is just as good as Luke being able to save Vader. It makes her a hero, it gives her a larger purpose and sense of identity. She, Rey from Jakku can save Ben Solo.

Then she doesn’t and she has let go of all of those ideas and instead become a new hero for a new age. Luke Skywalker is the legend. Rey from Jakku is the reality. Kylo’s emotional journey is more external—because by nature, he is so extra–a true Skywalker. But that doesn’t mean Rey doesn’t get equal development from her interactions with him. By finally closing the Falcon door on Kylo she is saying that it is her, not him, who has truly inherited the Skywalker/Solo legacy. She gets the Falcon, she gets the Jedi texts, Chewy likes her better, Leia bonds with her, Luke and Yoda think she’s cool. What does Kylo get? Hux’s eternal side eye.

The only female character who is truly underserved is Phasma, which Mary Sue editor Kaila has already brilliantly discussed.

I don’t think this will change anyone’s mind about Star Wars: The Last Jedi or that my opinion is inherently “right,” but I think we should have the conversation.

And if you want to yell at me and say I’m wrong, well …