[This post contains spoilers for Star Wars: The Last Jedi]

In my Last Jedi review, I said that Christie and Phasma were “woefully underused, for no reason I can possibly discern,” and the sentiment remains. The more I pick over my Last Jedi thoughts, the more glaring Phasma’s sidelining becomes in a movie that quite celebrates female power and leadership.

Instead of getting to carve out any kind of interesting character arc, Phasma is simply used as the B-plot villain for Finn to fight before the A-plot showdown between Kylo Ren and Luke Skywalker. She falls into incineration—lest we forget she was left in an actual trash compactor at the end of The Force Awakens, Phasma is once again tossed away like so much space garbage. Some fans are holding out hope that she’s not dead, but I’m done being teased that Phasma will matter in these movies.

What makes Phasma’s small Jedi role all the more confusing is that this was a frequent, fierce criticism lobbed at her presence in The Force Awakens: despite prominent placement in advertisements and merchandise, Phasma didn’t get much to do. The Last Jedi was the chance to stage a deeper look into an uncompromising woman with a fascinating background. But then The Last Jedi managed to give Phasma even less to do than The Force Awakens, which is almost an impressive feat.

I was tricked, once more, into expecting far more from Phasma than we got. Her clash with Finn—the former Stormtrooper FN-2187, who served under Phasma—was heavily touted in trailers, and should have been full of pathos and catharsis, a former conscripted-since-childhood soldier against the commander who shaped and tormented him. But it’s not terribly exciting as far as fights go, it’s awfully predictable, and it’s basically Phasma’s only scene of any importance. 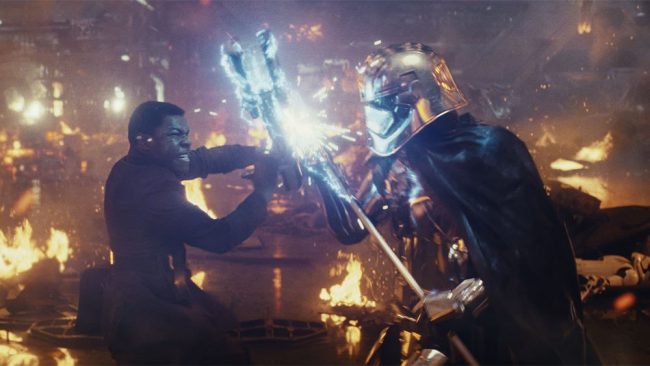 It’s also the only time we see a portion of her face—after her helmet is bashed in, and she’s swooning back into (probably) death. Imagine how much more resonance that scene would have had for both Phasma and Finn if she had been developed into a viable onscreen character by that point.

It’s even more confusing of a choice when we consider the amount of time and energy devoted to establishing Phasma within the wider Star Wars universe. An entire novel, Phasma, released in September as part of the Journey to Star Wars: The Last Jedi, by author Delilah S. Dawson, was devoted to telling Phasma’s backstory by proxy. She also received a four-part comic series written by Kelly Thompson, Star Wars: Captain Phasma, recounting her more recent adventures between the two movies.

This is a vaunted treatment that almost none of the new trilogy’s characters have received—not Rey, not Finn, not Poe, not Kylo Ren, not Hux. It seems as though the creatives at Disney/Lucasfilm were interested in cashing in on Phasma’s fan favorite status and her ability to move product and merchandise, but did not view these offerings as any reason to actually include her in the film in a significant fashion.

By contrast, the peevish General Hux receives far more screentime and things to do, including a comedic scene with Poe that opens the film, a Force-choke by new Supreme Leader Kylo Ren, and his seeming resilience at the movie’s end. Hell, we spend more time with the Caretakers, the “judgmental fish-nuns,” on Luke’s island, than we do with Phasma. Brand new characters got to deliver long monologues while side plots bloat the main plot.

But in all this noise there was no room for a powerful female Stormtrooper commander? Phasma was first envisioned as male, but that decision was reversed in casting, and it was significant for Star Wars, and deserved attention. It received plenty in the press but was never realized on screen. In addition, Gwendoline Christie is a compelling actress, and her face is well-known from starring on one of the most popular TV shows in the world, Game of Thrones, but we never even get to see it. The whole Phasma affair seems a bait-and-switch, and then a waste.

And why? This is what remains a frustrating mystery. The Last Jedi is a very long movie, and surely a few scenes developing and including Phasma could have been worked into a film that has time for Luke Skywalker to angrily milk an alien creature and then immediately drink that milk. But I won’t accuse The Last Jedi of being a movie that doesn’t give female characters their due. It most certainly does, on the Resistance side of things.

Yet we have been primed and positioned for more than two years to expect more from Phasma. The opportunity to explore a complicated, merciless woman devoted to the First Order was totally squandered. Instead, we got a thirty-minute escape sequence on space horses after Finn and Rose were hauled off for parking their shuttle in the wrong place. I’m going to assume that Phasma’s absence here is due to a failure of plotting and knowing what is most important and compelling to focus on, surely The Last Jedi‘s greatest flaw.