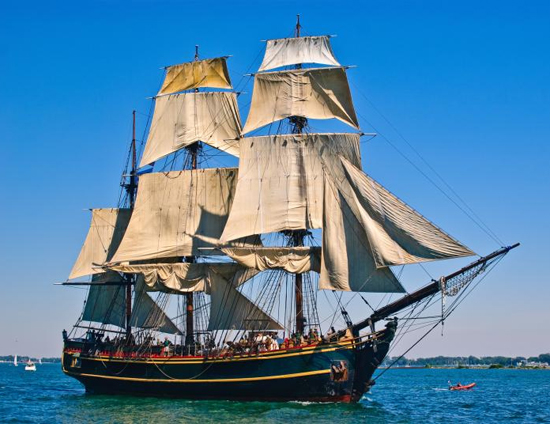 Of all the times to be casually sailing off the East Coast, now is probably one of the worst. Hurricane Sandy‘s still in effect, and the open water isn’t a good place to be. The HMS Bounty and its crew have now discovered this for themselves. At 4:30 A.M. this morning, the captain gave the order to abandon ship and enter the lifeboats. The Bounty is a well-known replica of the original HMS Bounty, and has appeared in a number of films. Specifically, it’s appeared in both Pirates of the Caribbean: Dead Man’s Chest and Pirates of the Caribbean: At World’s End. Thanks to Hurricane Sandy, it’s now an actual ghost ship.

Tracie Simonin, director of the HMS Bounty Organisation, said that the ship began to experience difficulties at about 19:30 on Sunday when it lost power and was unable to continue “de-watering”. [sic]

“At that time we contacted the US coastguard for assistance,” she said.

Though there have been conflicting reports on the matter, Simonin told the BBC that the ship was still afloat as far as they knew, making it a legitimate ghost ship. It’s pretty unlikely that the ship will be encountered intact once the storm passes, but there’s always hope. If not, at least it went out with style.