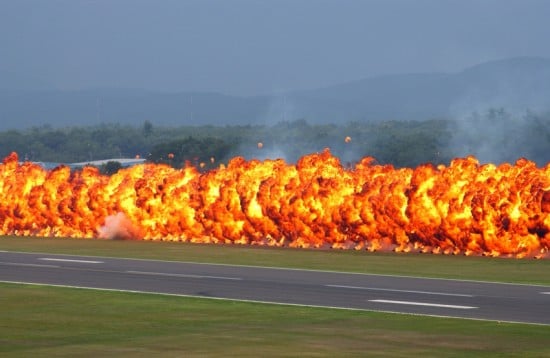 In anticipation of Australia’s internet filter, the voluntary euthanasia organization Exit International has begun to take action.  After realizing that they were on a leaked list of sites that would be blacklisted when the great Australian firewall (not pictured above) goes into operation, Exit International needed to find a way to teach its Australian members how to access their site.

Fortunately, under Australian law it is still legal to circumvent the filter and to show others how to do so.  But how to introduce 70 year olds to proxy servers and VPN tunnels?  Talk to your local Pirate Party, of course.

David Campbell, a member of Australia’s Pirate Party, worked up a presentation, and is now teaching eight masterclasses on bypassing the content filter.  According to Computerworld, about fifty elderly people attended the first.

Campbell’s presentation (which can be found here) works fine if you are already a basic internet user, I think.  However, if you have little to no experience with the internet I’m not sure that it would succeed.  For example, the presentation doesn’t point out firmly that the internet is simply a network of connections between computers, of which the “internet” as a conceptualized physical location is one product.

Given that, all I have to go on is his PowerPoint presentation, so I don’t really know how well he stressed these points in person — Hopefully quite well.  Consider this another step along the path to unfettered internet access becoming a right instead of a privilege.

Other subjects on the list of censored sites include gay rights, stem cell research, and online gambling.