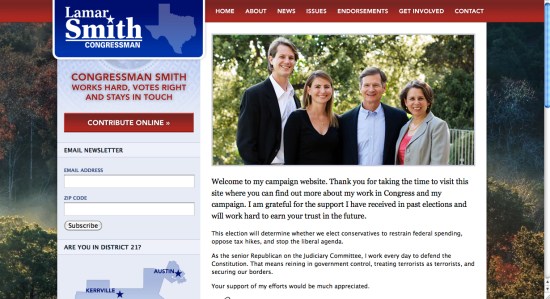 SOPA‘s intent isn’t what makes it bad. Trying to protect copyrighted content is a good thing, it’s just that when that pursuit goes so far as to slaughter Fair Use and threaten to forever change the Internet — in a bad, bad way — it’s not worth the fallout. What better way to illustrate SOPA’s overzealous approach than to start showing how practically everyone would be in violation, people like Lamar Smith, for example, SOPA’s author. We told you about the anti-SOPA petition that could have taken down Whitehouse.gov under SOPA, and congressman Lamar’s website is a similar situation.

Jamie Lee Curtis Taete of VICE, while checking to make sure Smith’s website was SOPA-clean, uncovered that Smith was actually guilty of copyright infringment for his use of a background photo. As you can see in the image above, there’s a landscape peeking out from behind the main body of the site, and as it turns out,  Smith never got any permission to use the picture. Taete was able to track down the picture’s photographer, DJ Schulte, who confirmed that no one had ever asked him for permission.

To make matters worse, the picture is under the Creative Commons license. This means that anyone can go ahead and use that picture for things just so long as it’s not commercial and the user credits Schulte. You can probably see where this is going. But the picture is licensed for free use anyway, right? Maybe just ask for attribution? What’s the big deal? Well, under SOPA, it’s a huge deal. That is SOPA’s primary failing, that common, insignificant mistakes can be blown out into DNS blocking for various flimsy reasons ranging from laziness to malicious intent. Under SOPA, www.texansforlamarsmith.com would be in some pretty hot water and just asking to be blocked.

While the anti-SOPA petition illustrated that languge in SOPA about linking was a death sentence to user-generated content, this illustrates how easy it is to just make a little mistake and get reamed for it. Smith’s office hasn’t made any comment on the whole situation yet, but it should be interesting to see him try and double-talk his way out of it considering how loudly and unilaterally he’s lambasted SOPA-detractors for overreacting. Now the shoe is on the other foot, and that foot is soon to be in Congressman Smith’s mouth.