Today in “We Told You So”: Ping Riddled with Spam 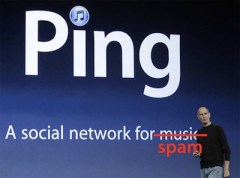 Though Ping has a fairly easy feature to report offensive content, Apple seemed to forget that this is the Internet. Like I mentioned, there really didn’t seem to be a way to enforce the music-only barrier of Ping, which has already been breached by run-of-the-mill internet spammers who got the ball rolling with the infamous “free iPhone” spam.

The Ping accounts in question were disabled, though it reportedly took about four hours after the spam’s appearance. There haven’t yet been reports stating what Apple plans to do to clean up its nascent network.

Hey, look at the bright side Apple: At least the first instance of spam in your music-only network was related to your own products.