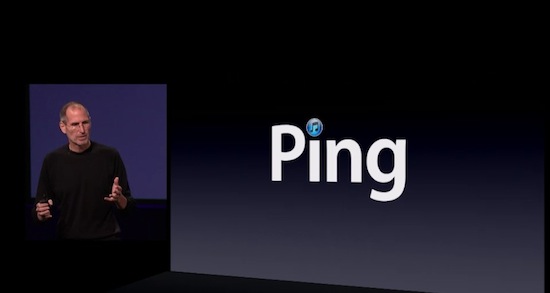 Somewhat curiously placed under the Store category in iTunes 10, rather than having a category of its own, lies Ping, Apple’s own hat thrown into the social network ring. Dubbed a “social network for music,” Ping aims to take standard social networking features and combine them with iTunes purchases and a music-centric theme.

With a fairly uncluttered and simple design, users and artists alike can set up their own Ping profiles, showcasing the music they like, recommendations, status updates, pictures, upcoming concert dates, etc. The new social network essentially allows users to keep up-to-date with music emanating from any source, whether it be following their favorite artist’s favorite music, seeing what their non-celebrity friends are downloading from iTunes, or making purchases directly from the iTunes store from within a network feed. Ping also boasts a few features to make the user’s music life a little easier, such as “Top Charts,” which lists what the user’s followers are listening to, as well as Facebook connectivity.

So, to confirm what you’re probably thinking right now: yes, it’s basically everything you’ve come to expect from a social network, but focused strictly on music.

It holds quite a bit of promise for the music world if enough influential artists actively use the service, but doesn’t that hold true for any of the other social networking services? Ping boasts one big advantage over other social networks, with one prominent hypothetical caveat. The advantage is being integrated directly into iTunes, which makes purchasing music simpler, but mainly, makes the install base every single person who uses iTunes, which will likely create a humongous user base. The caveat, however, has not been touched upon yet in either Apple’s announcement conference or on the Ping info page: if the network is strictly about music, what’ll happen when people start posting things unrelated to music? Or better yet, if the network continues to be advertised as a social network for music, will people migrate from networks like Facebook and MySpace, where music is already fairly prominent, but provides and encourages every other kind of social networking feature?

The service is available in iTunes 10, which is available now, and is also available through the iPod Touch and iPhone version of iTunes.