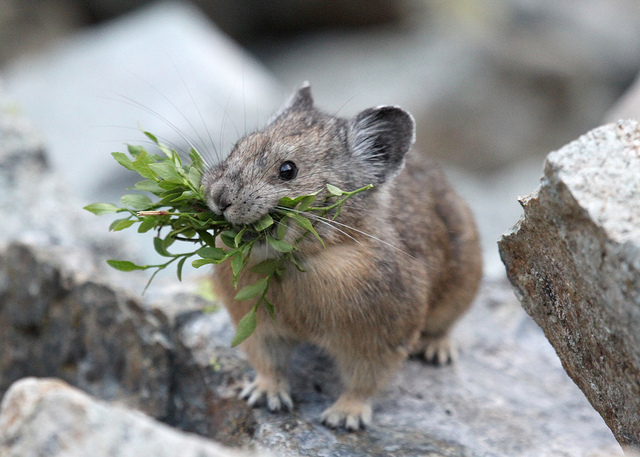 Life in the wilderness is no bowl of cherries, and animals aren’t exactly known for graciously sharing their food. One exception, though, may be Canadian pikas. A recent study from the University of Alberta shows that the little mammals actually prefer leftovers sometimes, choosing to dine on patches of vegetation that have already been grazed on — and thus also pooped on — by caterpillars. Exactly why isn’t understood yet, but researchers suspect that the caterpillars’ leavings may act as a sort of seasoning for the plants.

According to a study published this week in the journal Biology Letters, when given the choice, pikas preferred to graze on vegetation that caterpillars had already munched on. That’s unusual, because, like people, animals generally snack on leftovers only when times are tough, not when they have their pick of food.

Isabel Barrio, a researcher involved in the study, suggests one possible explanation for the pikas predilections — they’re dining on caterpillar dung as well as veggies.

“We think the caterpillar’s waste acted as a natural fertilizer, making the vegetation richer and more attractive to the pika.”

U of A researchers are continuing their studies to see if that explanation confirmed by further research, and also to improve understanding of the complex and changing food webs of the resource poor Arctic, whether those food webs are poop-related or not.