Norway’s “Piipshow” Bird Bar Is the Cutest Reality Show Ever

Duck Dynasty has nothing on these little guys. 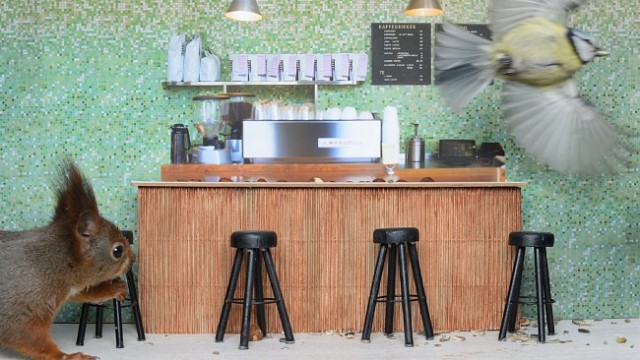 Now, you can see what this nature thing is about without ever having to go outside. Norwegian broadcaster NRK is live streaming Piipshow, an adorably voyeuristic look into the lives of regulars at a tiny bird bar and the belligerent squirrel that loves to ruffle their feathers.

NRK has this to say about their shamelessly adorable art project/reality show/nature channel:

This is not your normal coffee bar. It is broadcasted live second by second. Amongst the regulars you can find a short tempered nuthatch, a blue tit with the memory of a gold fish, a cheerful and carefree great tit and even a depressed bullfinch.

Wow, this place sure is seedy!

The action-packed live cam started streaming in the middle of March and is slated to provide viewers with three months of behind the scenes bird drama. The show was inspired by a project from 2003 where photographer Magne Klann and the NRK collaborated on a live stream of a bird feeder decorated like a dollhouse. The dollhouse was so popular that NRK teamed up with Klann again and brought on decorator Lars Aurtrade to construct the swinging bird hot spot for Piipshow.

Ornithologists will also be on hand for NRK to answer questions about the species of that patronize the bar as the weather warms up. For now, though, it seems that most viewers are captivated by drama between the bird regulars, particularly this series’ breakout stars, Blue Tit and Great Tit. Explains a Google translation of NRK’s website:

The most stable regulars are tits. They are loud and talkative, and bursting with speed and energy. They are represented by several species, all with the perky personality of the joint. Blue Tit and Great Tit is both flashy appearance, with green back and yellow belly with black longitudinal stripe in the middle.Tit is the largest of the two, and got its name because in the old days were often found hacking by fat, such as the Christmas ham that hung out to dry.

Another instance that left Piipshow viewers reeling was the now-famous appearance of a squirrel, prompting the NRK headline “A Squirrel Walks into a Bar and All Tits Break Loose”.

I’m not here to make friends, I’m here to get some nuts.

In my own viewing experience, nothing that exciting has happened, but the background sounds of a highway (or a babbling brook? I’m not up on my nature noises) make for an incredibly soothing soundscape. However, NRK promises something big on the horizon for the regulars of Piipshow, saying, “The romance is about to start. And you get to follow the outcome on the Piip Show!”

I don’t know what that could possibly mean, but I’m intrigued.

Turn the cameras off! TURN THE CAMERAS OFF!

(via Laughing Squid, Neatorama and NRK, images via NRK)