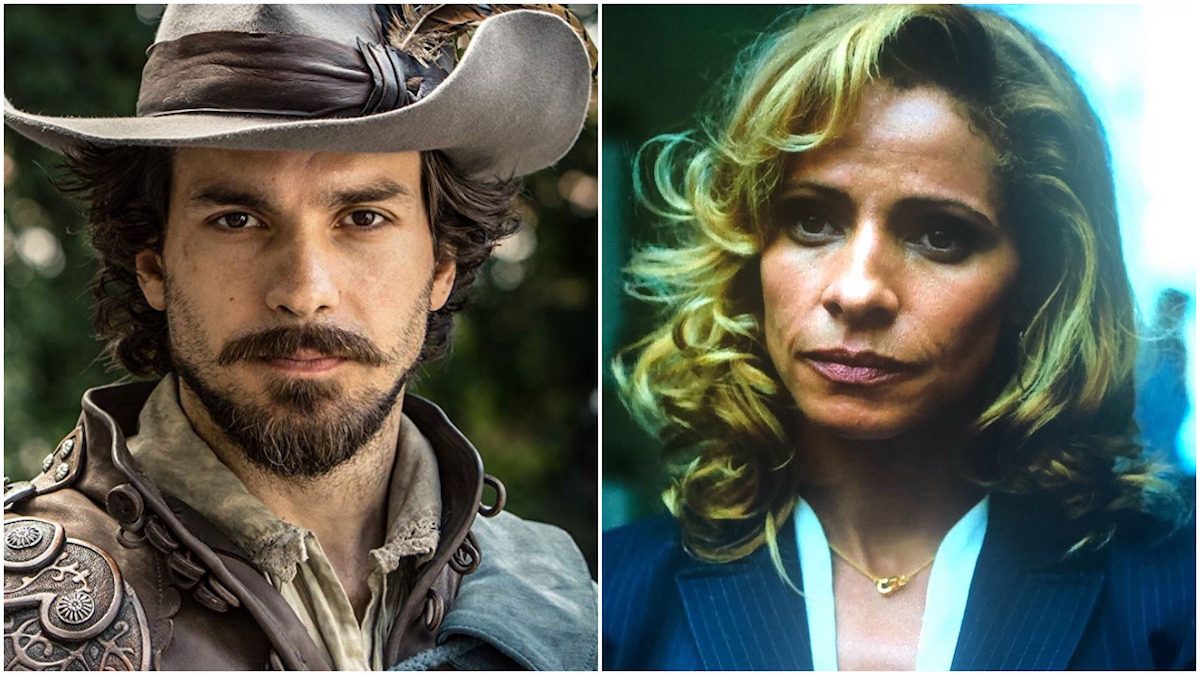 We’re warp-speeding ever closer to the Star Trek Picard series—my money’s on it being called, erm, Picard—becoming a reality. While the involvement of Sir Patrick Stewart was a given, the show has now officially started fleshing out the people around Jean-Luc.

Variety reports that actors Santiago Cabrera and Michelle Hurd have joined the Picard show as series regulars. Cabrera is known to audiences from roles on shows like Big Little Lies and Salvation. He also starred in The BBC’s The Musketeers as Aramis. Hurd is a familiar face to TV-watchers, having played Law & Order: SVU detective Monique Jeffries for two seasons. She’s particularly recognizable to genre TV fans for her parts on Jessica Jones, Blindspot, Hawaii Five-0, Daredevil, and Ash vs. The Evil Dead.

While Variety notes that “the exact nature of their roles is being kept under wraps,” Deadline Hollywood has heard rumors about who Cabrera and Hurd are playing. Per Deadline:

No details are being revealed about the characters Cabrera and Hurd are playing, but I hear Cabrera will play the pilot of Picard’s ship who also is a skillful thief. Hurd is playing a former intelligence officer who is a brilliant analyst with a terrific memory that has not been affected by her drug and alcohol abuse.

I have to say, if these descriptions are correct, it appears that Picard will be surrounded by complicated, multi-faceted characters from the get-go, which is promising. A central Star Trek character struggling with addiction could be an incredibly important arc to explore, and I know I’m not the only one who loves the idea of roguish thief-type who has somehow earned a place with Jean-Luc Picard.

Over on The Hashtag Show, an exclusive character breakdown published last week seems to support the rumors about Cabrera and Hurd’s characters. As io9 points out, “with these overly detailed breakdowns, take them with a pinch of salt,” but if the breakdowns can be believed, Cabrera and Hurd are playing “Lawrence” and “Alana,” respectively:

Lawrence is a handsome man in his 30’s of any ethnicity. . . who has a dodgy moral compass. He’s the pilot of the ship Picard takes on his mission. Being a capable (and enthusiastic) thief, his loyalties are questionable.

Alana is a female in her mid-40s to mid-50s and is of any ethnicity. She’s a brilliant analyst and has a great memory despite abusing drugs and alcohol. Often times she gets irritated with her own vulnerability and is certain of herself, even when she’s wrong. A former intelligence officer, she sees conspiracies everywhere. Her professional and personal losses weigh heavily on her.

Other lead characters that The Hashtag Show breaks down include Indira, a young woman who is “extremely smart and physically agile . . . but maybe not so mature and a bit socially challenged because she tries too hard,” and Starton, a specialist in positronic brains described as “charming in a self-deprecating way” and also “terrified of space,” so he may be quite the fish out of water.

There’s also Dr. Smith, an Emergency Medical Hologram a la Voyager (though I assume they’re not going to try and replicate Robert Picardo’s peerless characterization and performance). Dr. Smith is “programmed to learn but not become too self-aware” (hmm, we shall see), and is “calm, efficient, and empathic” but has trouble processing others’ emotions. Connie is avoiding a death sentence on her home planet and is “a mercenary pilot who uses her ship to transport people to and from an artifact of some kind.”

K’Bar seems to be Picard’s Wesley Crusher-esque mentee figure this go-round, and I have to post his character description in full:

K’Bar is the youngest of the leads. He’s a 17-year-old Romulan and the only child of what’s a mainly female Spiritual Order. A martial artist and considered a lethal weapon, he’s prone to mood swings and is committed to living in the moment with as much transparency as possible. He takes his devotion to Picard and his mission EXTREMELY seriously. . . obviously, they’re looking to find someone with Martial Arts experience, but also note that fencing is a plus as well.

I really like the idea of having a Romulan regular, and a moody Romulan Picard fanboy who’s a martial artist and fencer sounds pretty nifty. Also can we talk about “the only child of what’s a mainly female Spiritual Order”?

The Hashtag Show postulates that from the character descriptions, the show “sounds like they will be playing into Picard’s interest in archaeology, and his main mission will revolve around some sort of artifact that’s been discovered.” We also know that the series takes place twenty years after we last saw Picard in action, and that “the destruction of Romulus is official Prime Timeline canon now.” Additionally, “Picard will have been affected by the destruction of Romulus” since he played a crucial diplomatic role in Federation outreach to Romulus.

It’s probable that Romulans are playing a significant role here, which feels fitting for a couple of reasons. They haven’t been explored in-depth onscreen like their cousins the Vulcans have—and their hotheaded nature is primed for melodrama. I’ve always wanted to know more about what makes a Romulan tick. It’s worth pointing out that the Romulans’ history of xenophobia and isolationism seems like a solid canvas on which to draw futuristic stories about our own era.

I love the apparent commitment to diversity and intriguing character spread we’re already seeing from the Picard series. Make it so, CBS.