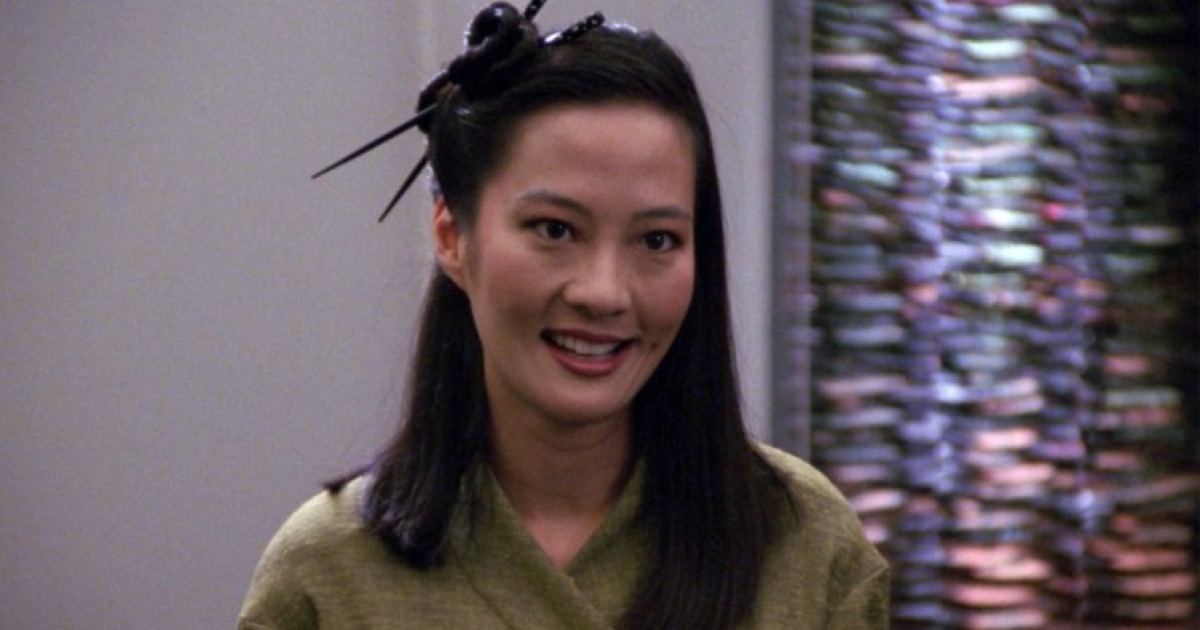 In the seventeen years since Captain Jean-Luc Picard last graced our screens in 2002’s Star Trek: Nemesis, I’ve periodically wondered just what we would see, if we ever revisited the Next Generation crew.

Reunions with Captain Will Riker and the rest of the Enterprise-E crew?

All of these are intriguing (or awful) possibilities, depending on your personal preference, but with production on the new Picard series now reportedly underway, there’s one thing I know I want to see once Picard and (hopefully) other Enterprise-E crew members return: a redemptive arc for one Keiko O’Brien (Rosalind Chao).

Since her debut in the Next Generation episode Data’s Day (S4, ep. 11), the much-maligned wife of Miles O’Brien (Colm Meaney) has been regularly criticized for being boring, resentful, and generally insufferable.

While some of the criticisms have arguably been valid—e.g. Keiko’s first introduction to viewers is centered around her abruptly using Data to cancel her wedding to Miles, thanks to an acute case of cold feet—most viewer complaints have focused on her overall likability. There have been broad references to Keiko’s “shrewish” personality across her eight episodes on Next Generation and nineteen episodes on Deep Space Nine, with more than a handful arguing that Miles could have done better.

As recently as 2017 and 2018, message board users debated whether Miles was a hen-pecked husband who simply capitulated to Keiko time and again, with one particularly vehement post stating, “he’d just kowtow, or whatever, to shut [Keiko] up. O’Brien probably thought that his caving in actually kept her from acting up, even worse.”

In a time when so many of us are challenging the idea that female political candidates have to be likable to be elected, the very fact that contemporary viewers continue to define Keiko by her ability to be pleasant towards Miles is already troubling, but the feeling is only exacerbated if we factor in the idea that Keiko’s character and development is all broadly predicated around poorly-drawn stereotypes of Asian women.

As a woman of Chinese-American heritage, everything about the character, from Keiko’s background as an exo-botanist,to her focus on a critical childhood memory of watching her grandmother practicing Japanese calligraphy (Violations – S5, ep. 12), or her push to have Miles eat “plankton loaf with kelp buds and sea berries” (The Wounded – S4, ep. 12), speaks of cultural stereotypes, likely checked off by a writer’s room of non-Asian writers who really just weren’t sure how to write a fully fleshed-out Asian character.

This is especially true if we also objectively consider that more than a majority of Keiko’s scenes appear to be centered around criticizing Miles for various misdeeds. Her now infamous sigh of her husband’s name—Next Generation/DS9 fans know what I’m talking about—and her seemingly endless complaints have even spawned joke videos like a 2013 YouTube mishmash of Keiko clips called “Why Everyone Hates Keiko O’Brien.”

(Originally likely intended as a sardonic Reddit take on the frequency of the Keiko likability debate, the video has since been periodically linked with anti-Keiko posts, in perhaps one of the best and more ironic examples of the public views of her character.)

With all of these negatives in mind, Keiko—whether wittingly or unwittingly—comes off as the 24th century answer to the Dragon Lady cliche, content to seemingly spend her days doing culturally appropriate things, all as she nags Miles into submission. It’s dispiriting both in terms of what Keiko means for Asian representation in the cultural zeitgeist, and how her rendering does continue to also act as confirmation bias for popular, public stereotypes on Asian women.

In those same debates on whether Miles was a henpecked husband, people also argue for Miles to hook up with Deep Space Nine crew member Kira Nerys (Nana Visitor), even as they acknowledge Keiko could be “attractive” in spite of her personality. Without knowing their specific intentions, the general argument of this faction is that (1) Keiko is awful to Miles, (2) Miles needs to hook up with his white crew member, (3) but at least Keiko is pretty. Not only does this further the Dragon Lady stereotype, but with a healthy dose of yellow fever for good measure.

None of this is actress Rosalind Chao’s fault, of course. She was an exceptional actress throughout her run as the character, delivering stern, critical lines with thoughtfulness and grace, even as her character frequently ends up in disastrous situations that would try even the unflappable Picard.

It’s perhaps with little surprise, then, that it was revealed in 2010 that Chao had also been considered for the role of Enterprise security chief Tasha Yar—a role that eventually went to Denise Crosby.

Producers clearly believed Chao had the talent and gravitas to take on a role of authority, particularly given what viewers would learn about Yar’s background throughout the run of Next Generation. While it’s now hard to imagine anyone but Crosby playing the role, it does seem unfortunate that instead of letting Chao shine in another lead character role, she was relegated to a secondary position.

But it’s not too late to give Chao and the character of Keiko the story they truly deserve and rectify all of these old mistakes with a more modern take.

As writers continue to work on the new Picard series, it would be simple to revisit Keiko’s character, and show her living a fulfilled life, where she and Miles are both happily pursuing their dreams. She can be more than a character defined by her culture, family, or attitude, but by what she means and brings to the Federation and the world around her.

At a time when Asian voices, particularly Asian female voices are now defining entertainment and breaking barriers, it seems worth giving one of the first major Asian TV characters the ending she deserves. Let’s prove that Star Trek can continue to pave the way for a thoughtful, more inclusive future.

Celeste Pewter is a former political staffer. Prior to her work in politics, she worked in a variety of other fields, including helping to organize an event for the Duke and Duchess of Cambridge while she was a graduate student at King’s College London. She can be found on Twitter at @Celeste_pewter.

contributorStar Trek: The Next Generation