Picade, an Arcade Cabinet for the Raspberry Pi 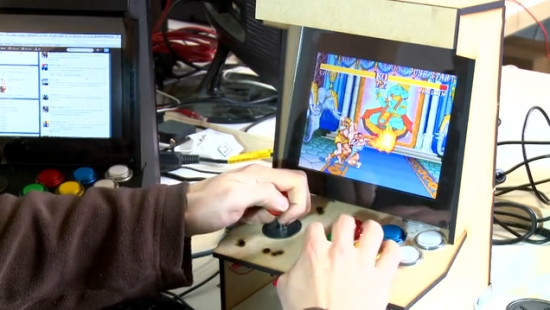 The Raspberry Pi continues to be a fun, extremely inexpensive hobby. Even if you can’t quite figure out what to do with one, the high-end model only costs $35, so that’s well worth the investment of having a toy you aren’t quite sure how to play with just yet. A Kickstarter project from Pimoroni, the team that brought us the awesome Pibow Raspberry Pi case, looks to bring us all an arcade cabinet for the Raspberry Pi.

The Picade will come in two versions: Picade, and the Picade Mini. Unfortunately for those not ready to put in a bit of work, the Picade and Mini come in DIY-kit form, supplying all the parts and instructions for building the unit — not counting the actual Raspberry Pi. Builders will simply need a screwdriver, pliers, and an hour or two of time set aside to construct the unit. The Raspberry Pi will, of course, need to supply the games. My guess is people will go mainly for emulators.

The Picade units also come with speakers and an amp, a 3.5mm stereo headphone jack, and a video input socket so the Picade can double as a second monitor for a computer.

If you aren’t into the Raspberry Pi, the Pimoroni team suggests you can swap out the Pi for something like a Mini-ITX-based computer. Check out the project over on Kickstarter. If you couldn’t figure out what to do with a Raspberry Pi, this might be just what you’re looking for.