This is some Gwen Stacey bullshit all over again, man. 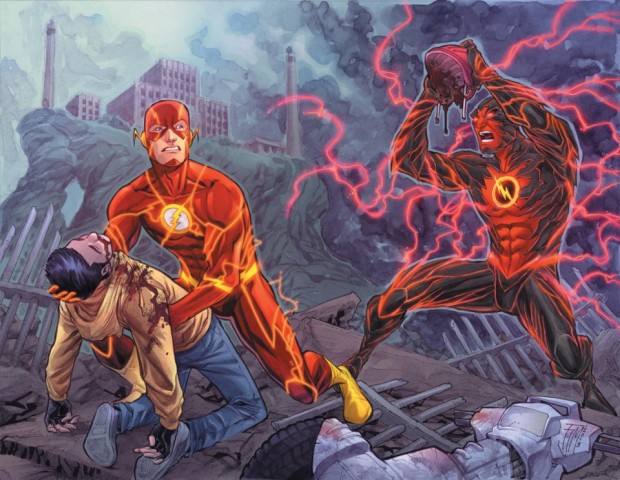 Huh, who knew! Turns out that super-fast speeds are bad for you. I’m surprised DC Comics hasn’t mined this for drama yet.

A brief paper written by students at the University of Leicester and recently published in the school’s Physics Special Topics journal looks at a scene from the trailer of The Flash (specifically, this one below) to see if Barry Allen’s heroism actually pays off in the real world where regular physics exists. Never mind that it’s most likely impossible for a person’s body to withstand running that fast; one impossible speedster concept at a time, please.

After calculating the distance travelled, the the mass of both the hero and the Crown Victoria taxi he’s running towards, and the pressure imparted by both collisions with the pedestrian, the students determined that it actually would have been better if Barry hadn’t gotten involved at all.

“The Flash’s intended heroic act results in more villainous consequences by injuring the cyclist more than the taxi would have,” the paper, which is titled “The Flash: Hero or Villain?,” says in its conclusion. “The Flash’s efforts will be serving the greater good if he lowers the speed at which he makes contact.  Alternatively, increasing the area over which he makes contact with the cyclist would also lower the pressure and likelihood of injury.”

Now hold on, nerds—we know the the students aren’t taking into account the “Speed Force” that all DC Comics speedsters tap into when using their power, which could allow Barry to absorb kinetic energy or even lend his own to objects or people he interacts with, this mitigating the possible damage. But you try looking a bunch of eager and passionate physics students in the face and telling them that they’re not allowed to do science about comic books!

Actually, maybe you should: other papers in this volume of Physics Special Topics include finding the escape velocity for an imagined “Flat Earth,” an exploration of how much helium you’d need to make a human head float without bursting the skull a la Scanners; and a calculation of “the depth of an Olympic size swimming pool required to crush an elephant.” Physics students, maybe you’re the villains, here. Those all sound pretty maniacal.

(via io9 and Physics Special Topics)