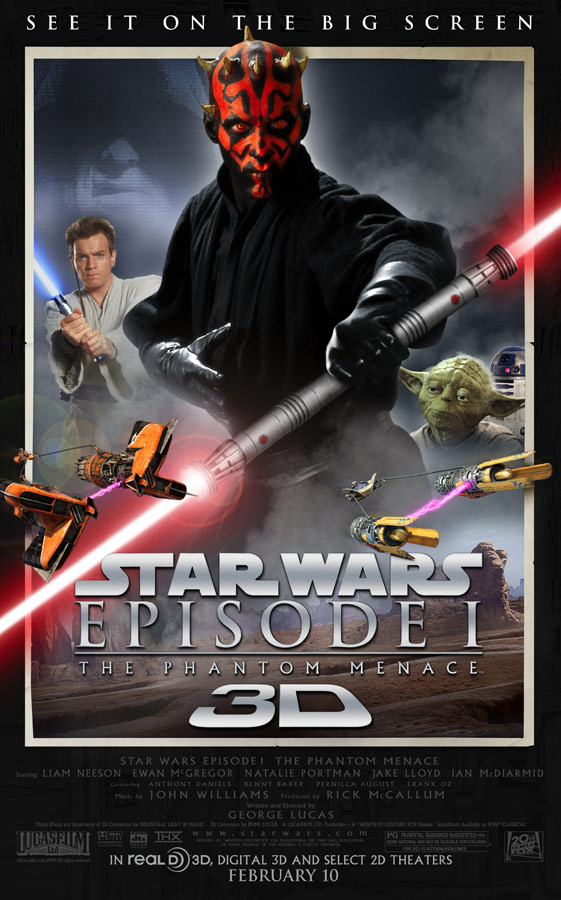 The people behind this poster for Episode I: The Phantom Menace 3-D have pretty brilliantly narrowed the movie down to the only reasons, at all, that somebody might want to watch it again for inflated 3-D pricing.

I can just see the conversation.

“Okay, so we got the guy who introduced the world to double-bladed-mu’uh’effin-lightsabers, and his leader, and the guy who kills him, and the adorable robot buddy, and the scene that launched a thousand dreams of becoming a sound engineer. We deliberately left out the two alien races that can be seen as disturbingly tone-deaf cultural stereotypes and the fatally annoying evil kid. Was there anything else about this movie that was cool?”

“Well, there was the female lead character who was politically powerful, clever, conflicted, compassionate, resolute, and beautiful without being sexualized, until the other two movies reduced her to a midriff-baring smear of horrible dialogue and a weeping baby incubator.”

“No, she shared too many scenes with the annoying kid. She’ll remind people that he was in the movie.”

“Okay, well, there’s the mentor, pretty much the only character in the series that doesn’t have lines that make you wince.”

“Same deal. Too many scenes with the annoying kid.”

“Oh! We should remind everyone that we made a whole new CGI Yoda!”

Yes, I’m going to go see this in 3-D. But I’m going to do my damnedest to go with my family and get them to pay for it.