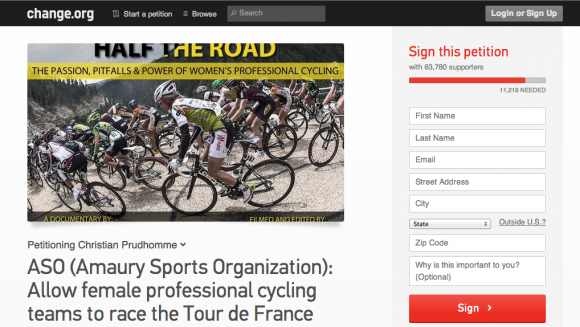 In professional cycling, the most prominant competition may be the Tour de France, in which men compete over multiple stages and terrains, over the course of about three weeks, to determine a victor. A group of female professional cyclists and triathaletes, Emma Pooley, Kathryn Bertine, Marianne Vos, and Chrissie Wellington, now want to challenge the inequality that has plagued the sport of cycling by opening up the Tour de France to female cyclists, addressing the issue in a very public manner. Pooley, Bertine, Vos, and Wellington are asking those who support their cause to sign their petition on Change.org urging the organizers of the Tour de France to create another aspect of the Tour de France for women, a

professional field running in conjunction with the men’s event, at the same time, over the same distances, on the same days, with modifications in start/finish times so neither gender’s race interferes with the other.

The goal of the petition, beyond simply introducing women’s cycling to one of the most notable cycling competitions in the world, is to bring attention to the inequalities in the cycling world to best effect, through a prominent event, and to hopefully open up for female cyclists the same opportunities that male cyclists already possess. In addition to allowing this accessibility to the longer races and larger prizes that male cyclists receive, Pooley and her colleagues also want to show that, physically, female cyclists are capable to competing with male cyclicts.

Having a women’s pro field at the Tour de France will also create an equal opportunity to debunk the myths of physical “limitations” placed upon female athletes. In the late 1960s people assumed that women couldn’t run the marathon. 30 years on we can look back and see how erroneous this was.

The petition needs just over 11,000 signatures still, so if you’re interested in helping these talented women showcase their talents in the way they deserve, check out the petition’s webpage and help them out.

Previously in Women in Sports