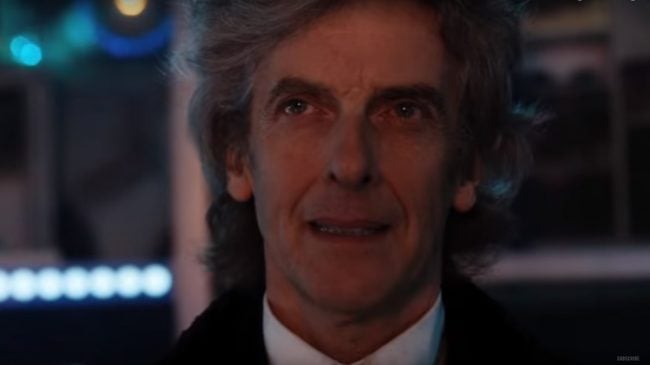 We’ve had to say goodbye to the Twelfth Doctor, but a little boy in Ireland got one final performance of the role from Peter Capaldi along with “Twice Upon a Time.” It was a Merry Christmas, indeed!

Brian McGilloway‏ posted the tweet below about a wonderful Christmas surprise his 9-year-old son David received after having written Peter Capaldi a fan letter expressing concern over the Doctor’s impending regeneration, because Twelve was his favorite Doctor. Capaldi sent back a beautiful response:

#PeterCapaldi is my 9 year old son’s fav #DoctorWho and he was dreading his regeneration. And then he got this letter with some words of comfort from the Doctor himself among his Santa presents. Such a kind man. pic.twitter.com/Dki37Wt6Er

This part got me right in the feels, and really gets to the heart(s) of the Doctor:

“Dear David, I hope you are having a very merry Xmas. Xmas is always good fun. Well, not always. Not every single second. Regenerating is not completely good fun. And it usually happens about Xmas-time. But you know what? Even though it can be a little bit icky (like really bad flu) it has always, always turned out good for Dr. Who. The new doctor always becomes your favorite and the one that goes… well, he never really goes, he is always there, somewhere in time and space, and if you think about him hard enough you’ll see him, and he’ll see you.”

The subsequent Twitter thread is equally sweet, with other fans confirming Capaldi’s kindness by telling of similar fan encounters, and still other fans reminiscing about times when they’ve met their heroes and it was even better than they could’ve imagined.

It’s nice to know that there are still good and kind people out there, even celebrities, and that sometimes are heroes are as worthy of that mantle as they seem.