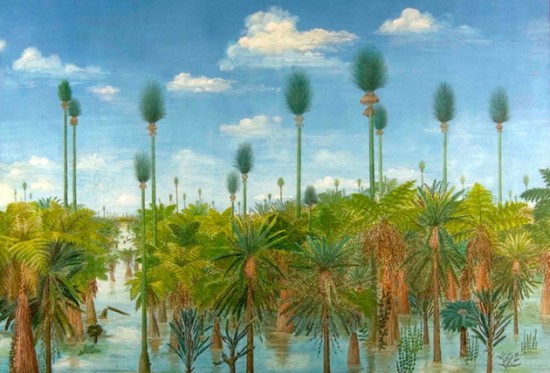 About 298 million years ago near the modern day city of Wuda, China, a volcano erupted. Over the course of several days it rained down volcanic ash with such ferocity that branches were torn from plants and enormous trees were felled in a nearby forest. The forest plants were completely buried in a layer of thick ash, and was in turn buried over eons of new growth. Now, scientists have unearthed this lost forest, giving them a glimpse into a long forgotten time.

Research at the site is being carried out by both American and Chinese scientists. However, a recent paper published by the University of Pennsylvania’s paleobotanist Hermann Pfefferkorn paints a vivid picture of the ancient forest. Because it was buried so quickly in volcanic ash, preserving the forest in remarkable detail, it’s being called the Permian Pompeii — a reference to the geologic age of the forest and the Roman city which was buried in ash.

According to Pfefferkorn the plants at the site are in excellent shape:

While some of the larger flora were ripped apart by the ash, other smaller plants were buried completely intact. Researchers have even found fully preserved leaves and cones at the site.

During the Permian age, most landmasses were clustered along the equator and had yet to form the supercontinent Pangea. Despite this separation, researchers found many known species living in the same area. Looking at three sites totaling over 1,000 square meters, Pfefferkorn describes a forest of low tree ferns occasionally punctuated by enormous 80 foot trees. Using the preserved specimens, the researchers sought the cooperation of Chinese painter Ren Yugao, who created the picture above.

Though most of the species in the forest were already described, the Permian Pompeii forest is a rare find that gives researchers a clear view of the time period. From it, scientists are hoping to learn more about how the plants lived together, and perhaps even the planet’s cycle of climate change. Ironic, since the forest was unearthed through coal mining activities in the region.

(University of Pennsylvania via Gizmodo, Nature)

paleobotanyProceedings of the National Academy of SciencesUniversity of Pennsylvania