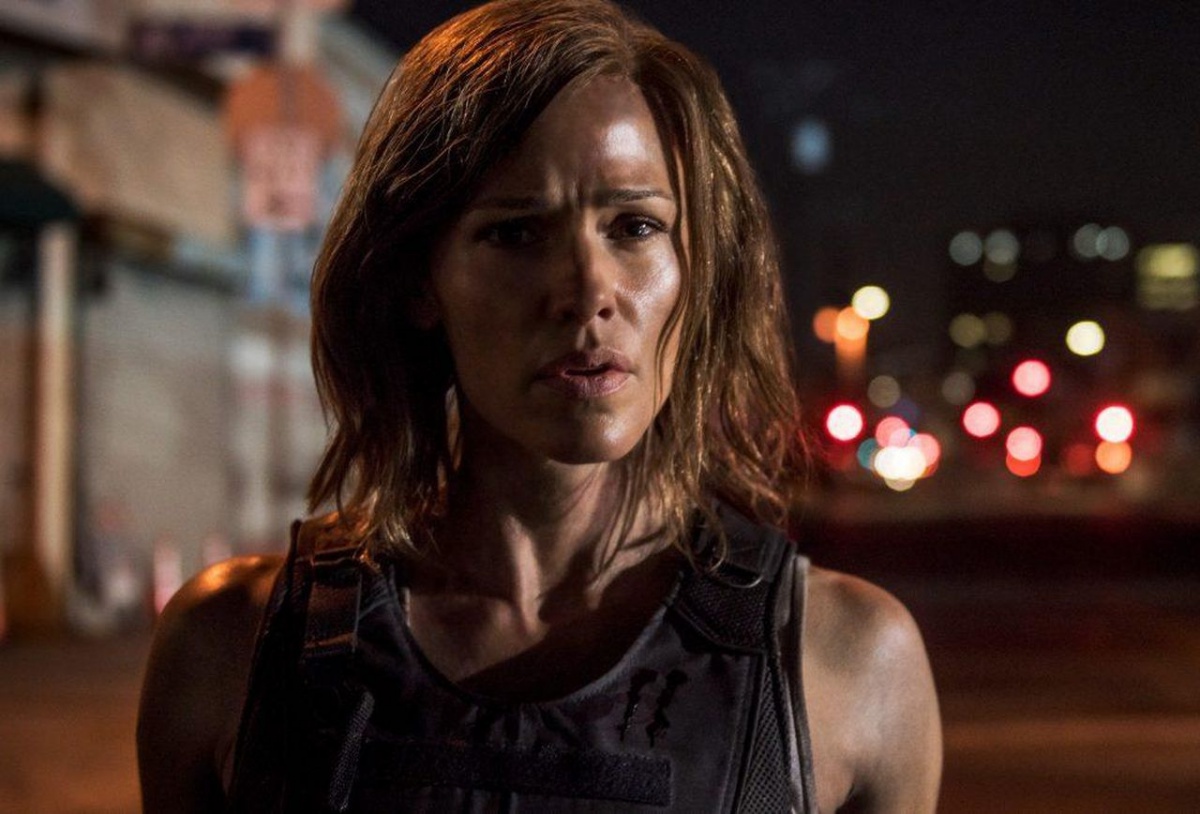 A White Woman’s Life Is Ruined by Mexican Drug Gangs: The Movie. That’s Peppermint in a nutshell, and it is that nutshell that makes the movie so difficult to enjoy, which sucks because it cannot be overstated how much of a badass Jennifer Garner is in this movie.

Garner plays Riley North, a bank teller, mother, and wife in the heart of suburbia. Her husband, Christopher, considers stealing money from a cartel but backs out at the last minute. It’s too late, and the leader, Diego Garcia (m’kay), orders a hit on the family. Christopher and daughter Carley are gunned down just after getting ice cream. Carley gets two scoops of … peppermint ice cream. Oh, and it’s her birthday.

Then the movie wants me to believe that the cartel is able to get a judge, defense attorney, and corrupt cop to throw away a case of three heavily gang-tattooed cartel men killing a tiny white girl on her birthday. M’kay. Even if this weren’t Trump’s America, that wouldn’t be a horse someone could sell me. Riley is tased, and when she wakes up, she suddenly turns into Sydney Bristow and spends the next five years becoming The Punisher to return to L.A and get revenge for her family.

As I was watching the film, even as I enjoyed the ’80s revenge-style violence, the framing of the narrative just pulled me away from even a surface-level enjoyment of Peppermint.

Considering the culture and world we live in, it’s just really reckless to make a movie that dehumanizes and stereotypes Mexican/Latino characters in a film that frames them as these savage brown people destroying the lives of white people. It’s a problem with the vigilante trope that is as old as cinema.

If you go back to D.W. Griffith’s Birth of a Nation, the Ku Klux Klan comes together, as a group of vigilantes, to protect white society, and most importantly white women, from the blacks. In the Westerns, the threat of “savages” and other lawless people is the reason that a lone man often has to come into a town and clean it up, because the system has failed them.

I grew up watching Westerns as a kid, and as a fan of comics and superheroes (who are vigilantes themselves), not to mention being a woman of color, I understand the distrust in the system, and I also love seeing someone getting their hyper-violent justice in a perfect world where things are black and white, and guilt is certain. Yet, being aware of the world we live in, I can’t turn off my brain to the way brown bodies are treated just because of entertainment, especially because, if we are going to talk about the reasons for vigilante justice, we need to focus on the people who allow injustice to happen.

In Peppermint the injustices are allowed because the cartel pays off a judge and a corrupt cop, and are able to afford a defense lawyer who has no problem gaslighting and harassing people. All the people with the power to get legal justice for Riley are paid off, and they are all white. They get killed, don’t get me wrong, but the gun-slinging big action set pieces are not set around them; they are set around the people of color.

We see men of color get shot in the head, stabbed, etc. The judge who let the men go, his hands are nailed to his desk, but we don’t even see that happen, nor his body after he is killed. There are scenes of the bodies of the three men who shot at Riley’s family being hung from a Ferris wheel, not to mention closeups of the headshots. It’s that contrast in brutality that is so unnerving and, again, stops any vicarious enjoyment. It’s just uncomfortable.

It speaks to how we, in this culture, are more willing to tear down POC, the poor, and other marginalized groups who are all suffering under the same boot of institutional power. I mean, we talk about how scary the cartels are, but don’t talk about how they came to be due to American policies.

We portray the Native American peoples as “savages” who attack the white settlements, but we don’t talk about the Trail of Tears and genocide that created that conflict. Reconstruction was largely botched because of white Republicans wanting to make the South pay, not caring about what would happen to the black population as a result. Then, when things got hard, they backed away from any conflict.

We blame everyone else but the people with true power. At least Superman goes after Lex Luthor; Riley just goes after a group of criminals who, outside of working for the cartel, probably lived much harder lives than her own before the death of her family.

According to research shared on The Hollywood Reporter, this year, the number of Latina speaking characters, “leaped from 5 percent to a historic high of 7 percent.” Huzzah? And that’s just looking at Latina characters. Adding on men, it doesn’t get much higher, and it also doesn’t take into account the kind of stories being told and who is telling them.

I’m not opposed to seeing POC play “bad guys” or criminals, but it matters who tells the stories and why. I’m currently enjoying Mayans MC (I love even the bad seasons of Sons of Anarchy), and when you look at the writers and directors, it is overwhelmingly Latinx or POC. That matters. Peppermint is directed by Pierre Morel and written by Chad St. John, who are both as white as they come. They may not intend to have this kind of internal bias, but it comes across in their storytelling.

I enjoy the vigilante narrative, and as someone who enjoys the escapism of action violence (can’t wait for John Wick 3, and I kind of love 2014’s Everly), I still think that we need to be thoughtful about the way we frame violence and POC criminality.

Looking at the trailer for Widows, one of the things I love is how diverse the cast is and how black the black actors are: Cynthia Erivo, Viola Davis, Daniel Kaluuya, and Brian Tyree Henry are all dark-skinned people, so it doesn’t have any of the messy colorism issues of painting only darker-skinned people as threatening and lighter-skinned black people are more innocent. It allows you to just see it as a movie without all of that mess—at least on the surface we still need to see how the movie plays out.

I wish Peppermint were just a little bit more aware, because on the surface, it could have been a badass film. Jennifer Garner is so good in it that I wish she were Black Widow in Marvel’s movies. I mean, I’ve always wished she were Black Widow, but even more now.