In which Eva Green secures herself an Emmy nomination. 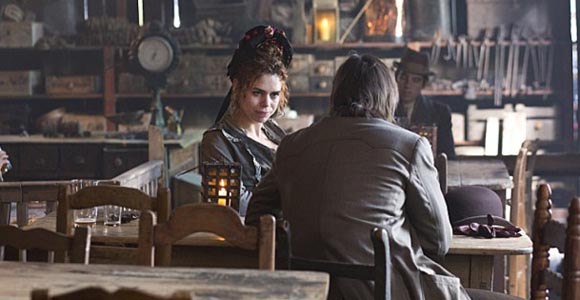 While episode one introduced us to the darkly gothic Victorian underworld of Penny Dreadful, episode two delves deeper into the show’s pervasive mythology and mystery. And it also gives us Billie Piper’s boobs. So generally it’s just a great time.

I would be amiss if I didn’t start this review by just straight-up worshipping Eva Green. The episode is called “Séance” for a reason; after a medium (played by a criminally-underused Helen McCrory) begins the titular ritual, Green’s character Vanessa Ives is possessed by a series of malevolent spirits in succession. Green executes what is essentially an eight-minute monologue with creepy flawlessness; she gives us an appearance from Malcom’s dead son, Peter; a millenia-old nameless demon who implies Malcolm slept with his missing daughter, Mina; and, potentially, an evil Egyptian goddess called Amunet, who is probably stalking Vanessa and wants to end the world. It’s no joke. All of the awards for Eva Green.

On the other end of the spectrum – and while I have overwhelmingly loved the casting in Penny Dreadful on the whole – the introduction of Reeve Carney as Dorian Gray falls flat for me. Wilde’s Dorian is a beautiful, hedonistic, classy, well-mannered charmer who can win anyone over with a smile and some well-placed words; a man so irresistibly charismatic and alluring that he can convince people to do whatever he wants (like subtly dispose of a body). Carney’s Dorian is greasy, skeezy, creepy, and just so obviously evil that it’s hard to imagine him traversing London Society without someone at least questioning why he hasn’t washed his hair lately. I hope the rest of this season rounds out his character – and does away with that awful, slouchy bathrobe. Dorian would never.

As if to make up for Dorian’s casting misstep, we’re also introduced to the always-lovely Billie Piper as quippy Brona Croft, who (despite her atrocious Irish accent) wins the audience over almost instantly with her sass and lack of class. An impoverished victim of industrialization and consumption, Brona gets a scandalous gig sexin’ Dorian on-(old-timey)-camera, and provides us with our first bit of female nudity so far. Midway through episode two? Not bad, Showtime. You held out way longer than I thought you would.

Quoting Wordsworth and fascinated by the ephemera of life, Victor Frankenstein remains the Romantic figure in our gloomy, Victorian landscape; his moments with his “monster” Proteus are beautiful in their simplicity as Victor teaches his child-like creation about their world. Though I suppose I should say “reminds,” not “teaches,” as it becomes interestingly clear that Proteus (unlike Shelley’s creature) retains some memories of his former self. But alas, we’re not in a Keatsian field of flowers, or whatever he was into, we’re in a gothic horror; and so Proteus’s heart is ripped in two by Victor’s first creation, presumably the creature from the novel, leaving the ambitious doctor crying bloody tears on the floor of his workshop. And scene.

Of course, in the midst of all this, we have a mystery figure rampaging through London, killing women and chopping up their bodies. It’s not a vampire – the women aren’t drained of blood – but each body is missing several parts (an arm, a liver, kidneys, reproductive organs). Could it be that Frankenstein’s monster needs a bride? Or could it have something to do with the fact that our American gunslinger, Ethan, is waking up on the docks covered in blood? Or is it the werewolf from the opening credits? Or is at a Dr. Jekyll and Mr. Hyde situation? Or is it Jack the Ripper? Someone stop me before I fall down a Victorian literary horror trope hole and never come out.

So with that wonderful note of confusion, we’re left with another cliffhanger, an evil Egyptian goddess with a vendetta, possessions, monsters, creatures, potential incest, and a bunch of sex. What more could you ask for from your weekly penny dreadful?