Penny Dreadful Review What Death Can Join Together | The Mary Sue

Penny Dreadful Episode 6 Review: “What Death Can Join Together”

In which Vanessa continues to have the weirdest sex. 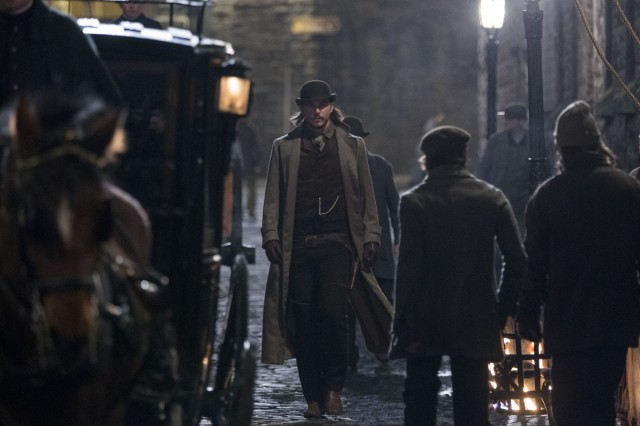 After our episode-long jaunt into Vanessa’s past, “What Death Can Join Together” puts us solidly on the path to Penny Dreadful‘s future – one we can only assume will be filled with vampires, wacky sex shenanigans, and the devil. And hopefully werewolves. Seriously, why the holdout on the werewolves?

This episode is all about regretting your poor decisions, more or less – when Vanessa is at her tarot table, she draws the V of Cups and The Moon, symbols of loss, illusion, disappointment, fear, anxiety, and insecurity. Ethan stumbles home to Brona after an assumedly sexy night with Dorian which we tragically did not get to see more of; Malcolm is starting to contemplate his daughter’s eventual fate; and Vanessa’s past just won’t seem to let her go. Because her past is the devil. It was interesting to see Dorian (who grows on me more with every episode) bond with Vanessa over their shared experience – it must be hard to find another person in the world who has also sold their soul to Satan.

Caliban, meanwhile, continues down his tragic Nice Guy path into Fedora-land. After demanding his undead-perma-girlfriend be way gorgeous (like, bro, have you seen yourself though?), Caliban has a super-awkward conversation with his Maude, the lovely actress. Maude is all like  “some of my best friends have weird faces,” and Caliban cleans her blood tube, and that’s about it. Oh, right; then Caliban breaks into her apartment, leaves her a gift, and stalks the place until she returns. Upon finding out Maude, the gorgeous and talented actress, actually has a boyfriend and did not just immediately fall in love with Caliban from one bad conversation, Caliban goes on a murderous rampage and kills poor Van Helsing. Nice Guy Caliban is the worst.

Luckily, Van Helsing had time to impart upon Victor some good vampire info (and to drop some important literary references, too). Van Helsing busts out Varney the Vampire; or, The Feast of Blood, which was an honest-to-goodness penny dreadful written by James Rymer, published serially between 1845 and 1847. The book is largely a mess, but it was a major influence on Stoker’s Dracula, and gave us the first appearance of now-common vamp tropes like fangs, victims with double-punctured necks, hypnotism, and super-strength.

Van Helsing also ominously delivers the “for the dead travel fast” line, previously spoken to Jonathan Harker in the first chapter of Dracula, but originally found in Gottfried August Bürger’s 1774 German poem Lenore. Though Stoker slightly mistranslated the line itself, Lenore features a woman with an undead lover who enjoys sleeping in coffins, so you can see where I’m going with this. The line encompasses pretty much everything we’ve come to know about Penny Dreadful: that there are creatures in the world who don’t follow the typical rules of living and dying; that rebelling against the natural order of life and death will end you up in some pretty dire circumstances, and fast.

This episode also sees Vanessa possessed by the devil after having kinky sex with Dorian – and, I must admit, “you’ll be possessed by the devil if you bang” is the best argument for Victorian prudery I’ve ever heard. We’ve also got Sembene, Malcolm, and Ethan aboard what we can only assume is Dracula’s ship, the Demeter, attacking the creepy albino versions of the Brides of Dracula. We know a message from Mina (channeled through Vanessa) sent our heroes hence, and Mina does magically appear at the end of the fight – but after last week’s episode and this week’s emphasis on illusion, I can’t help but wonder: is Mina doing all of this as revenge? Is Mina even really a part of any of this? Is the Master just fooling everyone into thinking Mina is even still alive? I have so many questions.

Fun end-of-review fact: during my research into this episode, I learned that, in traditional folklore, consumption (like Brona’s) was actually associated with vampirism. Victims of the disease would infect their families, slowly draining the life of everyone around them – making them, essentially, vampires. So not even Brona can escape the supernatural. That’s some deep stuff, Penny Dreadful.