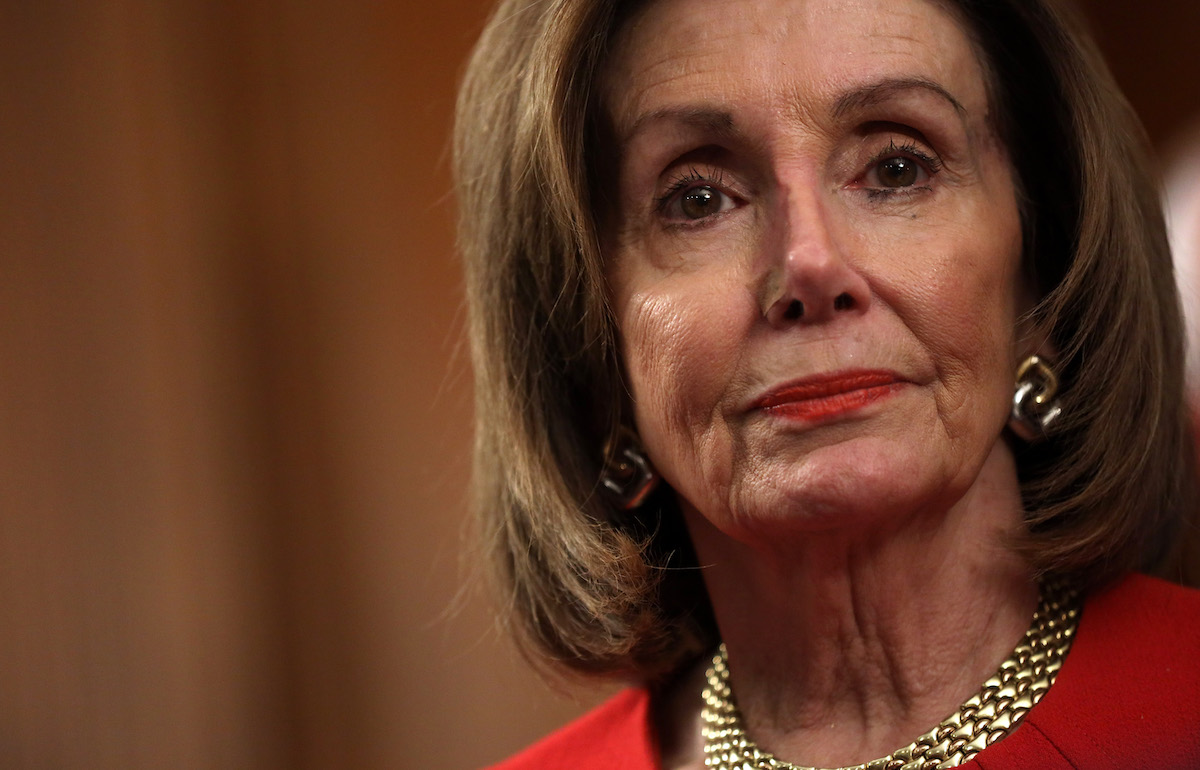 After voting to impeach Donald Trump last night, the next step in this process is for the House of Representatives to turn over the articles of impeachment to the Senate, where they’ll conduct their own trial and then vote on whether or not Donald Trump will be removed from office. Or, at least, that’s what’s supposed to happen.

I asked Pelosi point blank if she could wait “weeks” to send the articles to the Senate until Dems get what they consider a “fair” trial. I also asked if she would “never” send over the articles.

She wouldn’t rule out either possibility.

Following Wednesday’s vote, House Speaker Nancy Pelosi said she would not be transferring the articles immediately. First, she said, they’ll have to make sure that the Senate has a fair process planned. Because so far, the Republican-led Senate has not shown that they plan to have a fair process. In fact, some Republicans, like Lindsey Graham and Majority Leader Mitch McConnell, have outright bragged about how unfair they plan to be.

“I’m not trying to pretend to be a fair juror here”: Republican Sen. Lindsey Graham predicts Trump impeachment will “die quickly” in the Senate https://t.co/UaDfnN3wXU pic.twitter.com/Wu9ZlrkzfP

Pelosi hasn’t named the impeachment managers yet–those are House members who lay out the case against Trump and essentially serve as prosecutors in the Senate trial–and says she can’t “until we see what the process is on the Senate side, and I would hope that it will be soon.”

“So far, we haven’t seen anything that looks fair to us, so hopefully it will be fair,” she added, “and when we see what that is, we’ll send our managers.”

Pelosi wouldn’t comment on a timeline, whether it could be days or weeks or longer, though she did later clarify that she “never raised the prospect” that she wouldn’t send the articles at all.

As you might imagine, many Republicans are feigning outrage over this move.

Hmmm, so what you’re saying is that threatening to withhold a valued asset in exchange for a desired political outcome is….bad? https://t.co/y0R2Zkw0so

You mean a gimmick like not taking up 400 pieces of legislation in the senate or changing the rules like with Merrick garland? https://t.co/mQEaFIJIHx

*Merrick Garland stares at the steam rising from his coffee for a long time* https://t.co/qXgrHIzz0I

So please @SpeakerPelosi hold the articles of impeachment for as long as it takes for @SenateMajLdr to give us a fair trial.

We are DONE with one set of rules for Democrats & no rules for Republicans.

as mitch mcconnell complains about an “unfair” and “partisan” impeachment, merrick garland could not be reached for comment

Of course, if Pelsoi had handed over the articles of impeachment right away, Republicans probably would have accused her of rushing through the process or some such nonsense. That’s been their go-to tactic all along: Just attack whatever the Democrats do as being the wrong thing, even if it’s the thing you were previously demanding.

McConnell faults Democrats for impeaching Pres. Trump after 12 weeks, despite year of hearings for Nixon and multiple years of investigation for Clinton. The complaint from House Republicans last night was that Democrats have been impeaching Trump for three years. pic.twitter.com/0UwbSJyZzI