Behold the Dapper Perfection of Peggy Carter As Captain America

Coming to a comic shop near you! 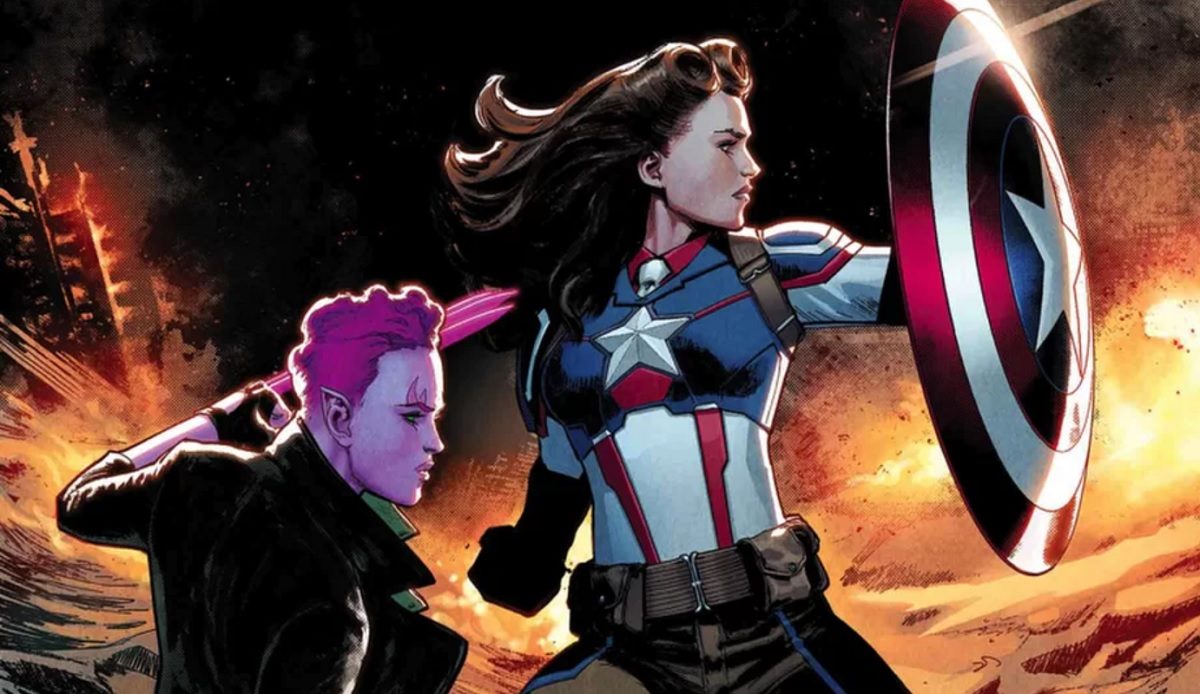 As part of its May 2018 previews, Marvel has revealed the cover for Exiles #3, written by Saladin Ahmed and it features Peggy Carter as Captain America! This iteration of Peggy has appeared before, in Marvel’s Puzzle Quest game, but here she is in glorious comics continuity.

Now, before the reactionary hordes come a-whinging, Captain Peggy Carter will only appear in Exiles as a guest star from an alternate future. She won’t be taking over the main Captain America titles.

Is there anything about this I don’t like? Since Peggy is British, that makes her an immigrant Captain America. She’s wearing an absolute nonsense tie-and-collar with this costume, which is exactly the sort of ridiculous blessing I want from a superhero suit. She’s still rocking those ’30s curls. She’s wearing cargo pants. She’s fighting Red Skull.

The solicitation for the issue teases: “CAPTAIN CARTER KILLS THE RED SKULL!” which is the only logline I need. According to the summary, Peggy is on a mission to kill “an apocalyptically armed Red Skull! And the Exiles are just in time to join the fight — ’cuz they’ve been kicked off their mission! There’s a new team of Watchers in town, and they’re cracking down on the Exiles’ interference in the timestream — even if it means the death of everything. Can the Exiles salvage Peggy Carter’s world, fix the Tallus and get back to saving reality before the Time-Eater tracks them down again?”

Prior to blessing us with this version of Peggy, Exiles has already given us a number of other gifts. For example, the series will also star a comic-book version of Tessa Thompson’s Valkryie from Thor: Ragnarok:

Super excited to announce that the fifth team member in my new Marvel book EXILES is *Valkyrie* — as inspired by @TessaThompson_x‘s swagger in THOR: RAGNAROK!

So, in this issue, am I going to get to see Tessa Thompson’s Valkyrie, a grizzled Kamala Khan, and Captain Peggy Carter fighting the Red Skull together? When is the MCU going to catch up with this glory?

“It’s a dream of a book to be working on for a Marvel fanboy such as myself,” said series writer Saladin Ahmed, “full of deep-cut guest stars and mind-blowing easter eggs. But it’s also new-reader friendly—a self-contained story of a group of misfits coming together, learning to trust each other, and, if they’re lucky, saving the [email protected]$# universe.” Based on the Easter eggs we’ve seen so far, I can’t wait to see what other fun, inclusive characters Ahmed will pull from Marvel continuity.