A Bunch of Scientists Studied the Most Optimal Way to Pee Standing up, Because Why Not

I mean, we've cured all the major diseases, so what else is there to-- wait, we haven't? 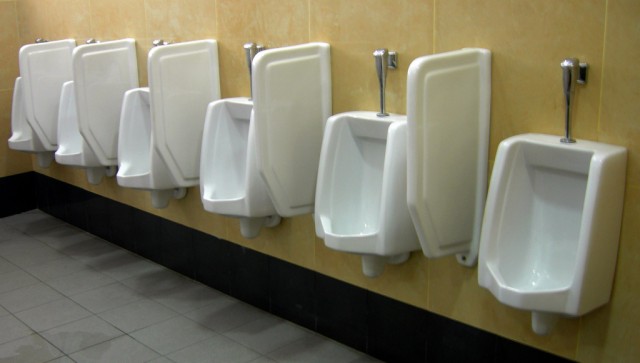 Since there is clearly nothing else important to be done with science anymore, a team at Brigham Young University have been studying the physical properties of what’s commonly referred to as “splash-back” in a urinal. Why? Because they figure everybody who’s ever peed standing up has been doing it the wrong way. You’re welcome, people with penises!

The team of physicists, who of course are calling themselves the “wizz-kids,” set up a rig that mimics the natural flow of human urine using water tanks and nozzles that emit colored water. They then filmed the fake pee using high speed cameras and studied the footage to determine which techniques affect the amount of splash-back you get. As a sort of control, they even set up a separate tank that mimics sitting on a toilet to pee as well.

The results? The closer you stand to a urinal, the less likely you are to get splashed, they wrote in the findings they presented to the 66th Annual Meeting of the APS Division of Fluid Dynamics (yeah, that’s a thing). If there’s too much distance between you and the urinal, your pee might start to break from its stream into smaller droplets, each of which will disrupt the surface of the urinal water and cause splashing. They call this the ” Plateau-Rayleigh instability,” which is possibly the coolest name ever for a thing that happens to the stuff that comes out of your urethra.

Angling is also important, they found; if you aim for the back of the urinal at a downward slope, not only is less splash-back created, but the droplets that do bounce back will be caught by the urinal. Spraying directly into the urinal or into the pool that forms at the bottom of the urinal, as you can imagine, does the exact opposite and creates a lot of splash-back.

Of course, those of us without dicks get the last laugh — as the researchers concluded, actually sitting on the toilet clearly provides the lowest amount of splash-back. Oh, sure, the other writers here have told me that using a urinal is still preferable because of things like “not needing to take your pants off” and “not having to put your butt on a dirty public toilet,” but what do they know? Sometimes you just need to sit down and reflect on your life while you’re whizzing. It’s very relaxing. Try it sometime.