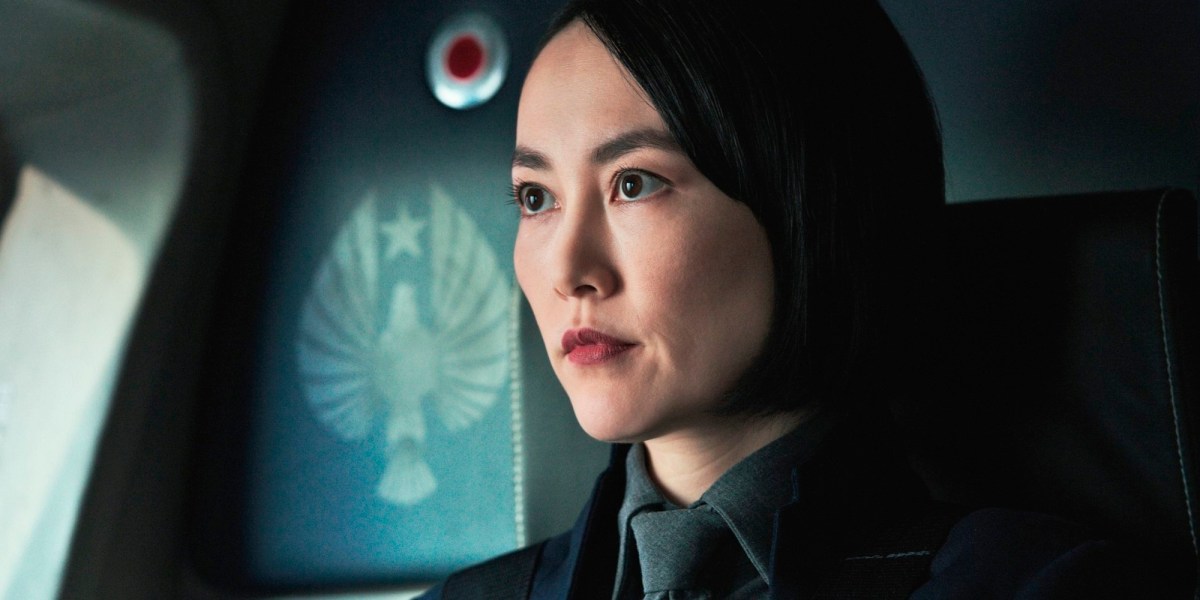 I was looking forward to Pacific Rim Uprising. Pacific Rim single-handedly made me give a crap about kaiju and jaegers, which were not, to be honest, my particular jam before. One of the best parts of Pacific Rim? Mako Mori, a nuanced, female character of color who was not only necessary to the resolution of the plot, but compelling throughout, entirely on her own. I was expecting her to become more central in the sequel. Instead, I got a son we’d never heard of before. [SPOILERS FOR PACIFIC RIM UPRISING.]

I was fascinated, not only by Mako Mori (Rinko Kikuchi) in the first Pacific Rim film, but by her relationship with her adoptive father, General Stacker Pentacost (Idris Elba). It was a story that’s usually given to father-son pairs: son must find his place in his father’s world as a means of coming-of-age. To watch that story unfold with a woman at its center, even if she wasn’t the lead, was pretty incredible, and I love that she was always treated as competent and formidable, even though Pentacost was trying to protect her the way any father would want to protect their child.

As she survived the first film, I imagined that Pacific Rim Uprising would be, in large part, about Mako stepping into her father’s shoes—or perhaps being called back to the Jaeger program for one last job. When I saw that John Boyega and Scott Eastwood were cast, I assumed they would exist in relation to her, that hers would be the journey we’d follow from the first film (since I knew Charlie Hunnam wasn’t returning), and that even though these other big-name male stars were brought on to make the film more “bankable,” that she would solidly be the protagonist.

Instead, she is criminally underutilized and dispatched in the most insulting of ways.

We’re introduced to John Boyega’s Jake Pentacost as Stacker Pentacost’s son—a son who’s never seen or even mentioned in the first film. As far as we knew, it was just Stacker and Mako. Now, suddenly, Mako has this younger brother with this deep connection and backstory in the Jaeger program? He used to be a Jaeger pilot? But he quit and became a thief, selling Jaeger parts on the black market? Becoming a mess that Mako, as the Pan-Pacific Defense Corps Secretary General, has to clean up, either by sending him to prison or returning him to the PPDC as an instructor to new cadets?

In Uprising, Mako Mori is a clear example of why it’s not only important to have representation of “women in power” in film, but that we need more women to be central to the narrative. We need their stories from their point of view. Yes, Mako is the Secretary General of the PPDC. Yes, she’s respected by her brother and everyone else as a hero … but she’s immediately sidelined by this dude whose “history” is imposed on us as an afterthought in order to make us care.

There is a glimmer of hope in another Asian female character who is introduced in the film. Liwen Shao (Jing Tian) is the president of Shao Industries, a tech company that, among other things, has been working on the creation of drones that can be piloted by people remotely, which would render jaegers obsolete. Shao strides onto the scene immediately badass, brilliant, and letting nothing stand in her way.

Mako is overseeing her efforts, and eventually must make an assessment as to the viability of the drone program in effectively combating jaegers, without the benefit of on-site human pilots. Yet when Mako is due to deliver a final assessment to determine the authorization of the drones at a PPDC council meeting in Sydney, her helicopter is taken down by a rogue Jaeger “Obsidian Fury,” and she’s killed before she can report.

Her death prompts the PPDC to authorize the drones and order their immediate deployment. Before her death, Mako reveals the location of a defunct jaeger production facility in Russia, which she suspects “Obsidian Fury” is using as a base of operations. So, it seems that only in death is Mako capable of moving the story forward. Jake does the requisite moping over his sister, then moves on to face the oncoming threats.

The story then proceeds to focus on the relationship between Jake and Nate (Eastwood), and between Jake and a new cadet named Amara Namani (Cailee Spaeny). It’s the mentor-mentee relationship between Jake and Amara that gradually gets the most focus in the film. Amara, like Mako before her, was orphaned in a kaiju attack. Like Mako, Amara also has natural abilities (she can fight, and she’s good at building DIY jaegers). And just like Mako in Pacific Rim, Amara finds that she can drift in a jaeger with Jake, someone unlikely, but with whom she has unexpected things in common. 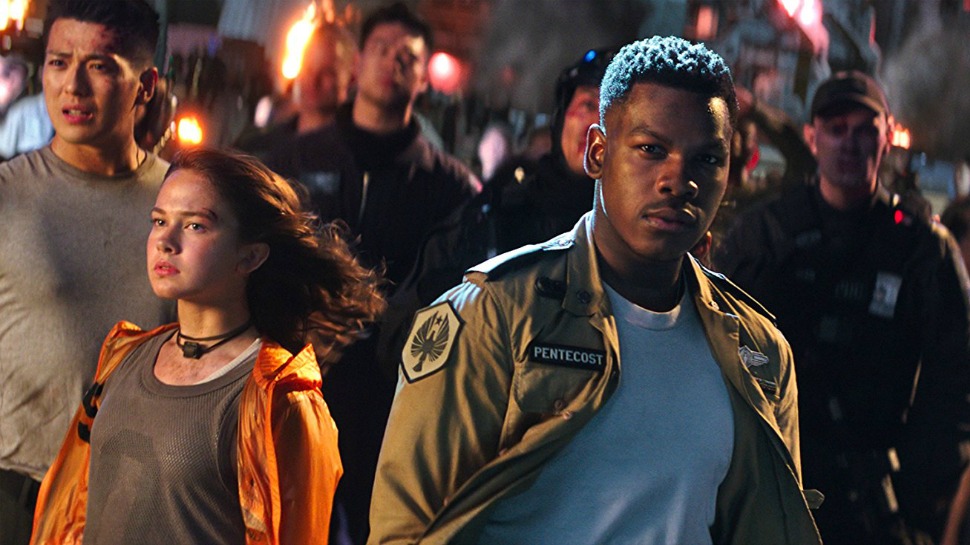 This leaves Shao as the only Asian woman in the film. (Because apparently, having two would be too much!) While Mako was still alive, I imagined that these two women would be coming to a head over their opposing views about drones. This is touched on briefly, but immediately dropped. Shao is obviously in favor: she’s running a corporation looking to profit, after all, and she’s also extremely proud of the tech she’s created. Mako is opposed, citing the fact that drones can be hacked, and that they will never be as improvisational as they can be with human pilots. I was looking forward to the moment when the fate of the world would come down to these two Asian women.

Instead, Mako is unceremoniously removed from the picture, and it turns out that Shao was being made a fool of the whole time, because Newton “Newt” Geiszler (Charlie Day), who was on her payroll for his kaiju expertise, was actually the Precursor Emissary, his brain having been taken over by the Precursors thanks to his penchant for drifting with kaiju brains.

We don’t have to worry about drones getting hacked after all, because it seems as though people can be hacked just as easily. Newt, acting as the Precursor Emissary, has used his access at Shao to install a backdoor in the drone program so that the kaiju brains could take over the drones, destroy the PPDC, and open new breaches all over the world.

Shao eventually aids in stopping the kaiju, but everything she does is in support of Jake and Amara. We don’t really get to know anything about her, except that she’s a corporate tech genius who’s I guess not as prickly as she first appears? 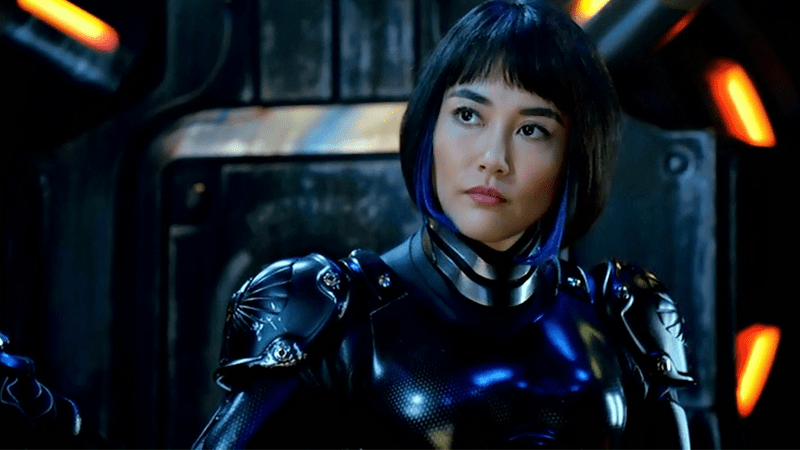 Regardless of whether or not Shao was or wasn’t a “good enough” female character of color, the fact is that this should have been Mako’s movie. Yet, rather than give her her due in what would’ve been a very natural progression from the first film, the writers of Uprising (one of whom was Emily Carmichael, about whom I was really excited) chose to invent two entirely new dudes and a white girl to replace her.

What a waste of a fascinating character. Mako Mori deserved better.