2014 Oscar Nominations and Predictions of Winners | The Mary Sue

Because we weren't deterred by our almost-completely incorrect Golden Globes predictions! 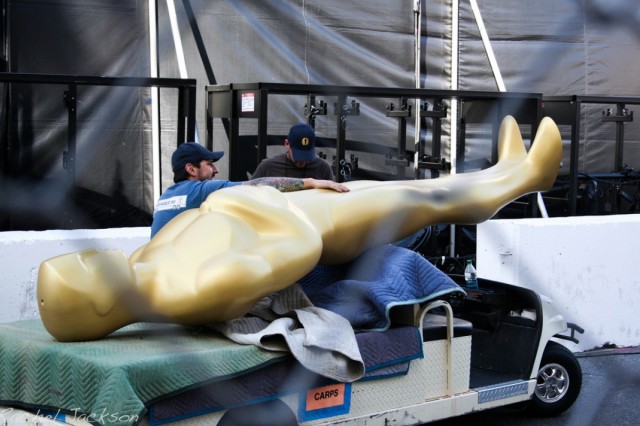 The Oscars are tonight, and though we’re all desperately curious to see if Jennifer Lawrence will trip over her dress again, we also have some thoughts about who should take home those coveted golden statues. Yeah, so our reasoning isn’t exactly based in hard science, but we like what we like, and nerds never have a shortage of opinions on films.

So without any further adieu, here are our picks (bolded) for the 2014 Oscars.

The Wolf of Wall Street

Best Actor in a Leading Role

Chiwetel Ejiofor (12 Years a Slave) – Remember when he was the Operative in Serenity?

Best Actress in a Leading Role

Sandra Bullock (Gravity) – Have you seen how hard it was for her to be in fake space for this whole film? I mean seriously.

Best Actor in a Supporting Role

Bradley Cooper (American Hustle) – Because how hilarious would it be if Rocket Raccoon won an Oscar?

Best Actress in a Supporting Role

June Squibb (Nebraska) – Because magicless Squibs get a bad rap.

Frozen – If it doesn’t win we aren’t going to be able to let it go.

Alfonso Cuarón (Gravity) – It’s a space movie and he directed a Harry Potter.

Get a Horse! – Because director Lauren MacMullan is the first and only woman ever to have fully solo-directed a Disney animated film.

Room on the Broom

Let It Go (Frozen) – Sorry everyone else, but bow down to Queen Idina.

The Moon Song (Her)

The Hobbit: The Desolation of Smaug – CumberSmaug!

The Wolf of Wall Street

Her – Okay, but who here doesn’t have an unhealthy relationship with their smartphone?

Nebraska – It was all in black and white, so we’re running with this one.

The Invisible Woman – We’re pretending this is about Sue Storm.

The Act of Killing

Cutie and the Boxer

20 Feet from Stardom – Because who doesn’t want to be a back-up singer?

Karama Has No Walls

The Lady in Number 6: Music Saved My Life – Look, we haven’t seen any of these (have you?), but we do hope music can save lives.

Canada wasn’t nominated this year, and with two Canadians on staff we are picking none in protest.

Dallas Buyers Club – Well we sure weren’t picking Jackass or The Lone Ranger, so…

American Hustle – We were really feeling the ’70s, for a minute there – and that’s tough to accomplish.

Aquel No Era Yo (That Wasn’t Me) – Because Shaggy.

Pitääkö Mun Kaikki Hoitaa? (Do I Have to Take Care of Everything?)

The Hobbit: The Desolation of Smaug – I think it’s probably not okay to be as aroused by a dragon voice as some of us were (okay, just Sam).

The Hobbit: The Desolation of Smaug – See above.

(via The Oscars, image via Rachel)