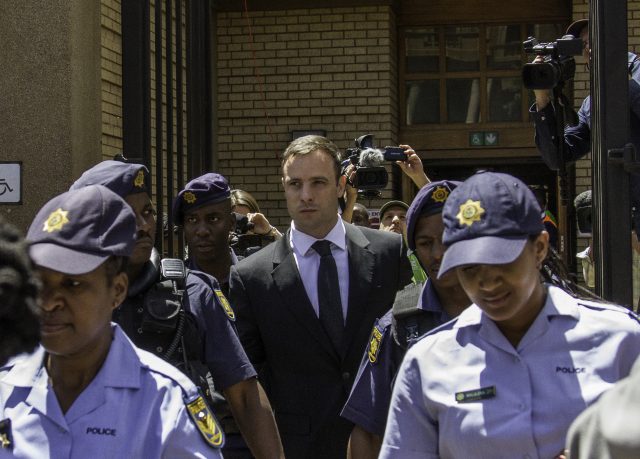 The Oscar Pistorius case was a trial that was heavily covered on all your favorite true crime podcasts and in the news. A new update in the case recently came when the supreme court of South Africa raised Pistorius’ sentence from six years to 13 years and five months according to NPR.

In case true crime isn’t your thing, here’s what you need to know about the case and why it was so high-profile:

Oscar Pistorius is a former Olympic Athlete who had both his legs amputated below the knee when he was around 11 months old, due to fibular hemimelia. However, that did not stop him from becoming a sprint runner and participating in the 2012 Summer Olympics, becoming the first amputee runner to compete in the games. Pistorius won gold at the Paralympics in the supper of 2012.

On Valentines’s Day 2013, Pistorius shot and killed his girlfriend, Reeva Steenkamp, in the early morning. He shot Steenkamp through a locked bathroom door and claimed that he thought Steenkamp was in bed at the time and that the person in the bathroom was an intruder.  Now, you would think that, with a quick turn of the head, you’d be able to see whether your girlfriend was still in bed with you for sure, but instead, Pistorius fired four shots into the bathroom. Additionally, the weapons he possessed were illegal.

The trial was overseen by Judge Thokozile Masipa. In the South African judicial system, jury trials were done away with after the end of apartheid. Instead, the judge appoints two assessors, who are essentially are there to help assist the judge in coming to a verdict. Both assessors and the judge were women.

During the trial, there was little evidence to properly deny Pistorius’ version of events or confirm the police’s assumption. Witnesses were called, some saying they heard a woman scream and one saying they could see a woman’s form from the light in the bathroom.

Pistorius and Steenkamp’s relationship was up for debate. Some people said they seemed happy together, while claims of possessiveness and abuse were also raised. I won’t get into all the details of the testimony because it can go on and on, but the podcast Real Crime Profile did a really good episode on the case. While the hosts tend to lean very heavily on the side of the prosecution and in my opinion sometimes miss some racial nuances in their discussion, they are huge on advocating for victims, which can be refreshing when so many true crime podcasts focus heavily on the murderer.

It became clear towards the end that Pistorius was not going to be found guilty of murder, which led to a lot of backlash against Masipa. Pistorius was sentenced to five years in prison for culpable homicide, or what would be our version of manslaughter, for killing Steenkamp. According to reporting from NPR at the time of the case, “Judge Thokozile Masipa cited ‘substantial’ mitigating factors in the case of the double-amputee athlete, saying that a long jail term ‘would not serve justice.'”

The government appealed the case, saying it was too soft. In 2016, the court of appeals changed the verdict to murder, and now Justice Willie Seriti of South Africa’s Supreme Court of Appeal increased the sentence to 15 years, minus time served. Fifteen years is the country’s usual minimum sentence for murder. Therefore, Pistorius has 13 years and five months remaining. He only needs to serve half before he’s up for parole.

What is so wrenching about this case and other cases like it is that domestic abuse rarely gets a spotlight unless it’s done by someone famous. As Samantha Bee explained with the “boyfriend loophole,” domestic abuse is a good indicator of types of escalation, while she was speaking about mass shootings, in that case, the reality is that it qualifies for a lot of things.

It’s reminiscent of the O.J. Simpson’s case, where there was a long history of domestic abuse (one that was well known to police departments at the time). While there is no definitive proof of the Pistorius/Steenkamp relationship being an abusive one, there were warning signs. You don’t just decide overnight to murder your significant other.

According to the CDC, “over half of the killings of American women are related to intimate partner violence,” and when murders of women were analyzed between 18 states from 2003 to 2004, it was found that “in 93 percent of those cases, the culprit was a current or former romantic partner” and “about 54 percent were gun death.”

Pistorius’s case was treated like an intense drama framed as a famous, inspirational athlete, who had just recently won a gold medal, killing his beautiful model girlfriend. Who Steenkamp was or could have been is rarely spoken of, and more attention is spent on Pistorius’s career rise and fall. We know little about her, and the sad reality is, just like Nicole Brown Simpson and many other victims, her name will be turned into a footnote for the life of her murderer.

Not to mention everyone who was killed by their partner that will get blamed for not leaving sooner—who have nowhere safe to go and hoped things would be different this time.