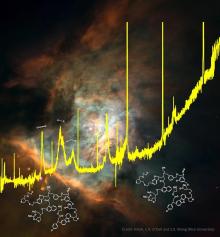 For years, scientists have been trying to solve the mystery of “Unidentified Infrared Emission features,” a set of emissions from interstellar space that, up until now, has been relatively unexplained. The thought was that they must be produced by polycyclic aromatic hydrocarbons, simple organic particles made up of carbon and hydrogen atoms. Now, research shows that is not the case, the emissions are actually being given off by much more complex organic matter that is being created by the stars.

Prof. Sun Kwok and Dr. Yong Zhang of The University of Hong Kong have made the groundbreaking discovery that much of the previously unexplained organic matter that floats between the stars is startlingly more complex than previously thought. Some of the structures are actually so complex that they resemble coal and petroleum, the kinds of organic matter we have previously only associated with, well, organisms. It kind of turns the idea of “organic matter” on its head.

If that weren’t enough, theses stars are not only generating complex organic matter, but they are doing it on the scale of weeks. And on top of that, they are essentially ejecting it into interstellar space. Just think about that for a minute: The stars are filling up space with complex organic matter. It’s not a particularly easy idea to accept, though Kwok has previously proposed the idea that stars produce organic compounds. “Our work has shown that stars have no problem making complex organic compounds under near-vacuum conditions,” he says, “Theoretically, this is impossible, but observationally we can see it happening.”

These organic byproducts created by the stars also seem to be the same kinds of organic material that is sometimes found on meteorites. Venturing into the realm of speculation, it’s possible that the pummeling young Earth took from comets and asteroids could have been essential to the rise of life. Now, there’s no real evidence to suggest that organic star matter was influential in that process, but there’s also nothing to suggest it couldn’t have been.

This discovery could stand to change our entire understanding of complex organic matter, where it comes from, and what it actually is. And when it comes to how we think about the way we fit into the universe, well, I think Carl Sagan said it best:

“Some part of our being knows this is where we came from. We long to return. And we can. Because the cosmos is also within us. We’re made of star-stuff. We are a way for the cosmos to know itself.”