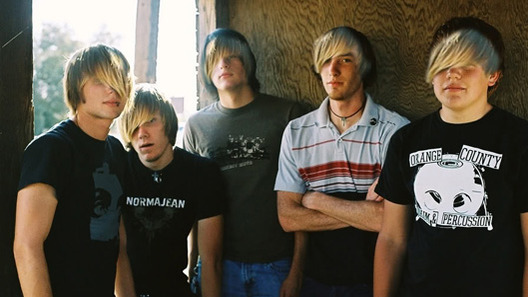 Remember when you were a teen and it was cool to have some hair hanging down in front of your eyes? Then remember the day you realized you grew up because you saw pictures like the one above and thought those kids looked dumb? Well, according to Tasmanian optometrist Andrew Hogan, trendy (if you’re over the age of 22: “dumb”) hair might cause lazy eyes.

Hogan, who happens to be the education director for the Optometrists Association of Tasmania, said that amblyopia, also know as the lazy eye, can be caused by obstructed vision due to hair that flops over one of a person’s eyes. Though trying to help out the longterm eyesight of younger generations, Hogan amusingly said, “If a young emo chap has a fringe covering one eye all the time, that eye won’t see a lot of detail,” and reiterated that if the hair is obstructing vision from a young age, that the eye can become lazy.

Hogan noted that the most vulnerable years of a person’s vision development is from birth to seven years old, but new research shows that vision could still be affected at a later stage in life, such as when you discover your first emo or indie band and start parting your hair all weird because you’re deep, or something.

Amusingly, 17-year-old Hamish Harrison was interviewed regarding the lazy eye matter, and said he liked how the hair looks, and wasn’t worried about the health issue, stating, “It’s just a personal choice really. My parents would like me to have a haircut but I’m not cutting my hair at all.” The Man responded to Harrison by getting it stuck to him, and waiting a few more years before Harrison realizes he needs to follow George Thorogood’s sagely advice.

(via The Mercury AU)