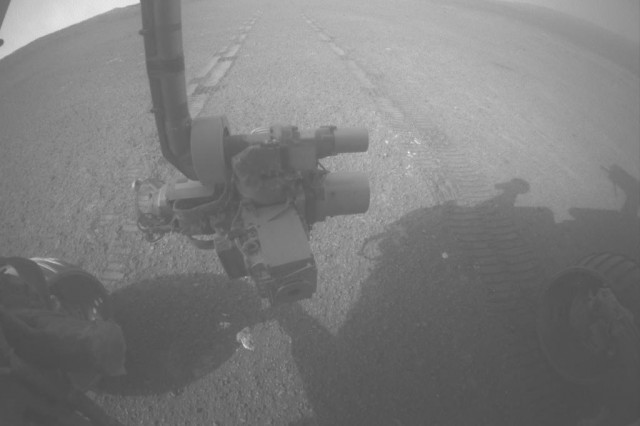 With all the hubbub surrounding the landing of the Curiosity rover, folks tend to forget that it’s not the only device operating on the planet. The Opportunity rover’s still kicking up there, for example, and it’s hauling butt to get the job done. It’s been hauling so much butt, in fact, that on Thursday it broke NASA’s 40-year-old record for total distance traveled on a world other than Earth.

That record, until this week, was held by the Apollo 17 Lunar Roving Vehicle. According to JPL, astronauts Eugene Cernan and Harrison Schmitt drove their buggy a total of “22.210 statute miles or 35.744 kilometers” in 1972. That’s a pretty significant distance, and it’s taken Opportunity nine years to break it.

Specifically, they received transmission that Opportunity had moved a further 263 feet. That may not seem like much, but it’s part of a push from an area the rover’s been working in since 2011. That 263 feet pushed the rover’s total distance since landing in January of 2004 to 22.220 statute miles — 35.760 kilometers. It’s going to keep going, so it certainly seems like the little rover will hold the record for some time.

It’s also worth noting that this is just NASA’s record. Soviet Union’s Lunokhod 2 holds the international record of 23 miles — 37 kilometers — from its Moon excursion in 1973.

(via NASA, image courtesy of NASA/JPL)