An Open Letter to Michelle Rodriguez Re: [Re]Assignment 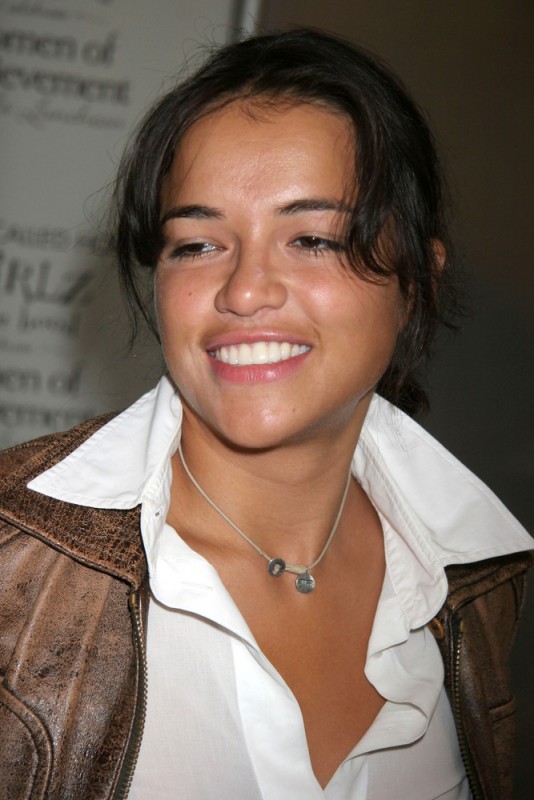 I don’t know if you’ve ever watched the Battlestar Galactica prequel show, Caprica (only me and, like, five other people did. That’s probably why it got cancelled, which is a shame. It was a good show), but there’s this great line that Sam Adama has when talking to little William Adama when the police are after them. He says “Stick around! If you run away, you’re guilty of two things: the thing and the running away from the thing.” That pretty much goes for everything, doesn’t it? Like, when one is reprimanded for wrongdoing, whether warranted or not, and their response to that reprimand is cavalier or hurtful in its own right, they are then guilty not just of the wrongdoing, but of the hurtful response. Wrongs compounded by other wrongs.

Two years ago, I wrote an open letter to Joss Whedon, someone of whose work I’m a huge fan. He responded to a fan question via Twitter like this: 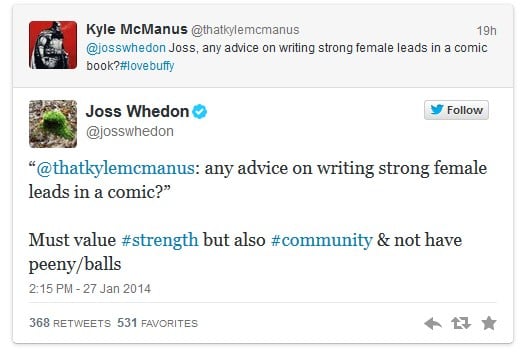 The transgender community, many of whom are fans of Whedon’s, reached out to him expressing their anger and pain concerning his response. As if there were no such thing as women with penises and balls. As if transgender women didn’t exist and as if those women aren’t worthy of being counted as women, or capable of being “strong.” It pointed to a huge blind spot of his, as he likely wasn’t even taking transgender people into account when he said that. That’s basically the problem. It likely didn’t even occur to him. That’s how invisible trans people are when they aren’t being used as punchlines, sob stories, or oddities in film and TV.

Granted, many trans fans reacted angrily, sending Whedon messages which, had they stopped to think for a second, they may have reconsidered. But you know what? That anger was the product of entire lifetimes being either erased or brutalized. So, one would think that, no matter what the delivery, the message should’ve been clear enough to someone like Whedon, a man who expertly manipulates subtext for a living. What you said hurt, maligned, and erased an already marginalized community. Please acknowledge our pain, they would have said, if entire lifetimes of marginalization hadn’t made them spew fury instead.

So how did Whedon respond?

He has since abandoned Twitter, which is just as well, since it’s clearly not his medium. But here is a clear example of what I was talking about above. Rather than acknowledge that the people criticizing his unfortunate tweet might have a reason to be so upset, he got defensive, criticized the critics by saying that it was they who just didn’t get him, and then put the burden on them to stop following him if they didn’t like it.

This surprised me, because Whedon had always struck me as someone who cared deeply about people, and who wanted to try and do better and learn from missteps. Yet here he was: guilty of the thing, and then guilty of his response to the thing.

I like the original title, Re-assignment is a stupid title for a movie. Hope you guys find it interesting either way pic.twitter.com/LPWhVMuzTG

So, why am I telling you this? Glad you asked.

I’m writing to you, because I recently read about your response to criticism surrounding your upcoming film [Re]Assignment, in which you play a male assassin who is surgically turned into a woman by a villainous doctor, played by Sigourney Weaver. The premise of the film is absolutely a huge problem with regard to the transgender community for reasons that The Mary Sue’s Jessica Lachenal already wrote about beautifully, so I won’t rehash.

My concern now is with how you responded to the people bringing up the criticism. Because just as I was surprised by Whedon’s response in the example above, I’m surprised by your response to the criticism here. Especially since, for so long, you’ve been someone who has argued for better representation in film for women and people of color.

According to The Guardian, who also posted this Instagram photo of you in costume as the “male version” of your character, you defended the film at the Toronto International Film Festival as you described your reasons for doing it in the first place:

“In retrospect I’m I glad took the plunge, the industry seems to be running low on edgy creativity & ‘real take a chance’ controversy, sometimes it makes me want to scream, instead I did what I always do when I’m bored with the ‘status quo’, I shot crazy b movie Indy to express my frustration.”

You then told The Hollywood Reporter that, “This is an action genre film and we’re not trying to get psychological or deep about it, so lay off. It’s an entertainment piece. Calm down guys, I’m on your team.” The thing is, if you’re on a team and you ignore your teammates, they may decide to kick you off the team.

To put your frustration into context, I’d like to remind you of some past comments you made about gender inequality in film. Comments that I agreed with, understood, and respected:

You understand better than a lot of people how pervasive and harmful gender stereotypes can be. You know how representation translates into the real world. You understand it so well that, in the past, when something didn’t stand up to your code of ethics, you turned it down, even if it meant making less money. And listen, no one wants or expects you to be broke.

However, it seems that you, like Whedon, and like most cisgender people, have a blind spot when it comes to transgender people. You might be female, Latina, and bisexual, but that doesn’t mean that you in any way understand the trans experience, nor does it mean that you can afford to dismiss their complaints regarding the projects you choose.

I understand that you’re not playing a transgender character. I get that. Really, I do. I understand that this is supposed to be a “crazy b movie.” I’m a fan of well-made action or pulp or grindhouse movies. Here’s the thing: no project, no matter how fluffy or entertainment-driven, exists in a vacuum. [Re]Assignment is coming out at moment when the transgender community is only starting to be given any attention by the mainstream, and they’re working really hard to dispel certain myths and stereotypes.

So, maybe you can understand how a film about someone whose sex is changed against their will for shock value might not go over so well at this particular moment in history. Just as you’re tired of going back to the same ol’ female tropes you mentioned — women finding strength via rape, women being empowered only to die, women being reduced to being sexual or emotional support for more prominent male characters — the transgender community is equally tired of being reduced to shock value. They are tired of tropes that treat gender confirmation surgery as if it’s a freak show, a plot point to be used simply to be shocking or sensational.

I’m writing to ask you to take a step back and think about how the struggles of the trans community intersect and where they overlap with ours. For I, too, am also a cisgender, bisexual Latina (despite my labeling myself as ‘heterosexual’ in my open letter to Whedon. A lot can change in two years!), but to me, the trans community’s struggles are my struggles, too.

Now, I don’t know whom you know or don’t know, but I would venture to guess (and please correct me if I’m wrong) that a big difference between you and I is that I’m friends with several transgender people. My fiancee is a trans woman. I’m fortunate enough to have these people in my life, and because of them, I have educated myself more about what the trans community wants and needs from cisgender people. Not everyone is so lucky.

In addition to changes that need to be made in our laws, in our media, and in our hearts, one of the biggest things the trans community needs from us cisgender folks is for us to listen when they tell us about their experiences. To listen without being dismissive. Because no amount of entertainment is worth hurting an entire marginalized group. No one performer’s desire to push their own boundaries is worth an entire community’s pain. And I don’t think your intention is to cause anyone pain. I really don’t.

You’ve already made this film, and it’s already started being screened. The bullet has already been fired from the gun. There’s no putting it back. All I can ask you to do now is to not ignore the community that’s gotten shot. Run to them. Ask them what they need. And try to do your part to stop the bleeding.