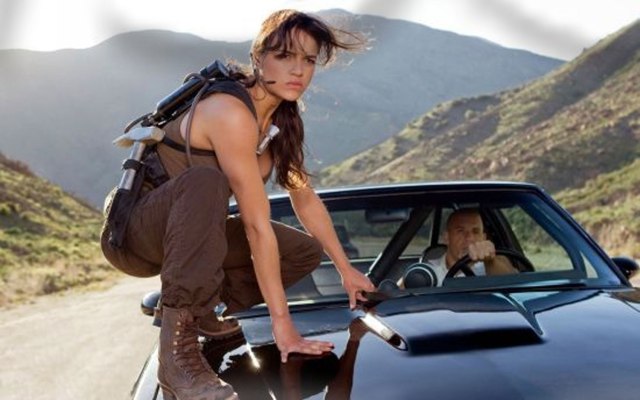 Earlier this year Michelle Rodriguez became a subject of controversy after saying during an interview with TMZ that ”minorities in Hollywood” should “stop stealing all the white people’s superheroes” and “make up [their] own,” comments she later clarified in a heartfelt Facebook video about creating original content for people of color.

During a recent interview for Furious 7 with NJ.com, Rodriguez elaborated a little more about the importance of creating that new content in Hollywood, and shared how that belief has informed her career:

I have such a strong sense of self, there are certain lines I just won’t cross. I’m really picky about the parts I choose. I can’t be the slut. I cannot be just the girlfriend. I can’t be the girl who gets empowered because she’s been raped. I can’t be the girl who gets empowered and then dies. So I just said to myself, look, you’re going to just have to create your own archetype, doesn’t matter if you go broke doing it. And I almost did go broke, twice! But people finally got it: OK, Michelle is not malleable, you’re not going to influence her by shining fame and money at her, and they stopped offering me that sort of stuff. But you know, it’s a Catch-22. It’s helped me and it’s screwed me. I’ve stuck to my guns and I’m proud and people get it. But I also haven’t carried a movie since Girlfight.

[…] I remember this script that came over my desk and it’s – I’m not even going to name it, it’ll just get me in more trouble – but I was reading it and at first I wanted to say no, because she’s Latina and she’s a drug dealer, and that’s like the only time you see Latin-Americans in Hollywood pictures. But I kept reading and I thought, well, some of it is based on truth, and she’s kind of an interesting person. And then I turn the page and they’ve stuck in this rape scene. Which didn’t even happen in real life, they just stuck it in there, this made-up thing and I thought, why? Why it is necessary to take her down like that? I mean, like Million Dollar Baby – why’s she got to die at the end, man? I mean, I get the tear-jerking, but would you do that to a male character? … I mean like 80% of the writers out there are men, and of course you’re going to write what you know. But it’s our fault as women for not penetrating that market, you know? I can’t complain about the scripts that are out there until I start writing some myself.

Although that might be the most legitimate criticism of Million Dollar Baby I’ve ever heard (seriously, fuck that movie and watch Girl Fight instead), I think blaming women for our underrepresentation in Hollywood is a slippery slope–the majority of writers are men because the film industry has a history of systemic sexism, not because fewer women are inherently interested in sharing their stories.

It’s far easier for men to make it in Hollywood in any capacity than it is for women (particularly women of color or those on the LGBTQ+ spectrum), and to place the entire onus for change on groups that Hollywood has a history of “othering” seems like a pretty slow way of shifting the status quo. It’s important that underrepresented creators continue to make their own opportunities outside the system rather than waiting for the mainstream to give them their turn, but the entertainment industry also needs to be more inclusive.

That being said, Rodriguez’s emphasis on women and people of color creating their own stories doesn’t mean she can’t see an urgent need for representation–when asked about the Furious franchise’s enduring popularity, she explained

[…] I think it has a lot to do with the multicultural cast. People in this country – or in Spain, in Africa, in Asia – they can buy a ticket and see somebody who looks like them, and someone who isn’t necessarily a stereotype but an individual, a character who’s kind of blue-collar but also in this heroic position. It’s still pretty rare to have characters like that you can identify with. And after all this time, it’s crossing generations. I have six-year-kids running up to me and talking about Letty, which is really cool.

Hollywood, follow that cool: we need more of Michelle Rodriguez, and more of the female characters that she’d actually like to play.