One of my favorite things about Oni Press’ seasonal slates is the wide variety of graphic novels available to readers, each with their own lush universes, imaginative storylines, and beautiful art styles that truly make for a memorable and satisfying read.

The Spring 2021 slate is no exception, as each of the graphic novels coming out has already been making waves for their strong voices, compelling narratives, and refreshing new perspectives on girlhood, love, and LGBTQ+ identity. Though each of these graphic novels embodies a unique tone, their overall vibe is reminiscent of warm, coming-of-age slice of life tales that are perfect for fans of Steven Universe and Lumberjanes! 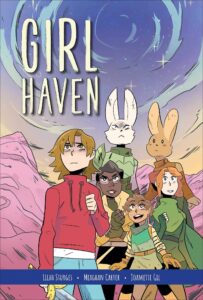 A beautifully poignant and imaginative fan in the vein of Nimona, Girl Haven is a story about identity and what it really means to discover the magic of who you are, set against the back-drop of a fantastical world full of sorcery, friendship, and the cutest fairy tale creatures!

Three years ago, Ash’s mom, Kristin, left home and never came back. Now, Ash lives in the house where Kristin grew up. All of her things are there. Her old room, her old clothes, and the shed, where she spent her childhood creating a fantasy world called Koretris.

Ash knows all about Koretris: how it’s a haven for girls, with no men or boys allowed, and filled with fanciful landscapes and creatures. When Ash’s friends decide to try going to Koretris, using one of Kristin’s spellbooks, Ash doesn’t think anything will happen. But the spell works, and Ash discovers that the world Kristin created is actually a real place, with real inhabitants and very real danger.

But if Koretris is real, why is Ash there? Everyone has always called Ash a boy. Ash uses he/him pronouns. Shouldn’t the spell have kept Ash out? And what does it mean if it let Ash in? 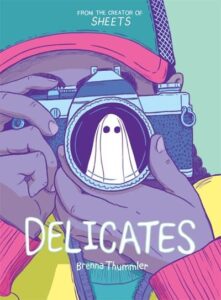 Picking up where the poignant Sheets left off, Delicates follows Marjorie as she reaches the cusp of teenagehood. But in the midst of reinventing herself for acceptance into the cool kid clique, Marjorie threatens to not only lose herself, but the best friend she’s made in Wendell.

Marjorie Glatt’s life hasn’t been the same ever since she discovered a group of ghosts hiding in her family’s laundromat. Wendell, who died young and now must wander Earth as a ghost with nothing more than a sheet for a body, soon became one of Marjorie’s only friends. But when Marjorie finally gets accepted by the popular kids at school, she begins to worry that if anyone learns about her secret ghost friends, she’ll be labeled as a freak who sees dead people. With Marjorie’s insistence on keeping Wendell’s ghost identity a secret from her new friends, Wendell begins to feel even more invisible than he already is.

Eliza Duncan feels invisible too. She’s an avid photographer, and her zealous interest in finding and photographing ghosts gets her labeled as “different” by all the other kids in school. Constantly feeling on the outside, Eliza begins to feel like a ghost herself. Marjorie must soon come to terms with the price she pays to be accepted by the popular kids. Is it worth losing her friend, Wendell? Is she partially to blame for the bullying Eliza endures?

Delicates tells a powerful story about what it means to fit in, and those left on the outside. It shows what it’s like to feel invisible, and the importance of feeling seen. Above all, it is a story of asking for help when all seems dark, and bringing help and light to those who need it most.

The Hazards of Love, Book 1: Bright World by Stan Stanley 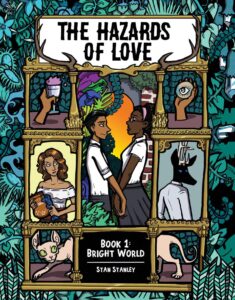 Gorgeous artwork immerses the reader in a world of magic, mystery and breathtaking monsters in The Hazards of Love, Book 1: Bright World. At its core an LGBTQ+ love story, this graphic novel also explores the true power that comes with accepting every part of yourself, even the ones you think are “imperfect”.

Collected and in color for the first time, The Hazards of Love follows the story of a queer teen from Queens who makes some mistakes, gets dragged into a fantastical place, and tries to hustle their way back home.

Amparo’s deal with the talking cat was simple: a drop of blood and Amparo’s name to become a better person. Their mother and abuela would never worry about them again, and they’d finally be worthy of dating straight-A student Iolanthe. But when the cat steals their body, becoming the better person they were promised, Amparo’s spirit is imprisoned in a land of terrifying, flesh-hungry creatures known as Bright World.

With cruel and manipulative masters and a society that feeds on memories, Amparo must use their cleverness to escape, without turning into a monster like the rest. On “the other side,” Iolanthe begins to suspect the new Amparo has a secret, and after the cat in disguise vanishes, she’s left searching for answers with a no-nonsense medium from the lesbian mafia and the only person who might know the truth about Bright World.