"Who doesn't want to see a dog wielding a samurai sword?" 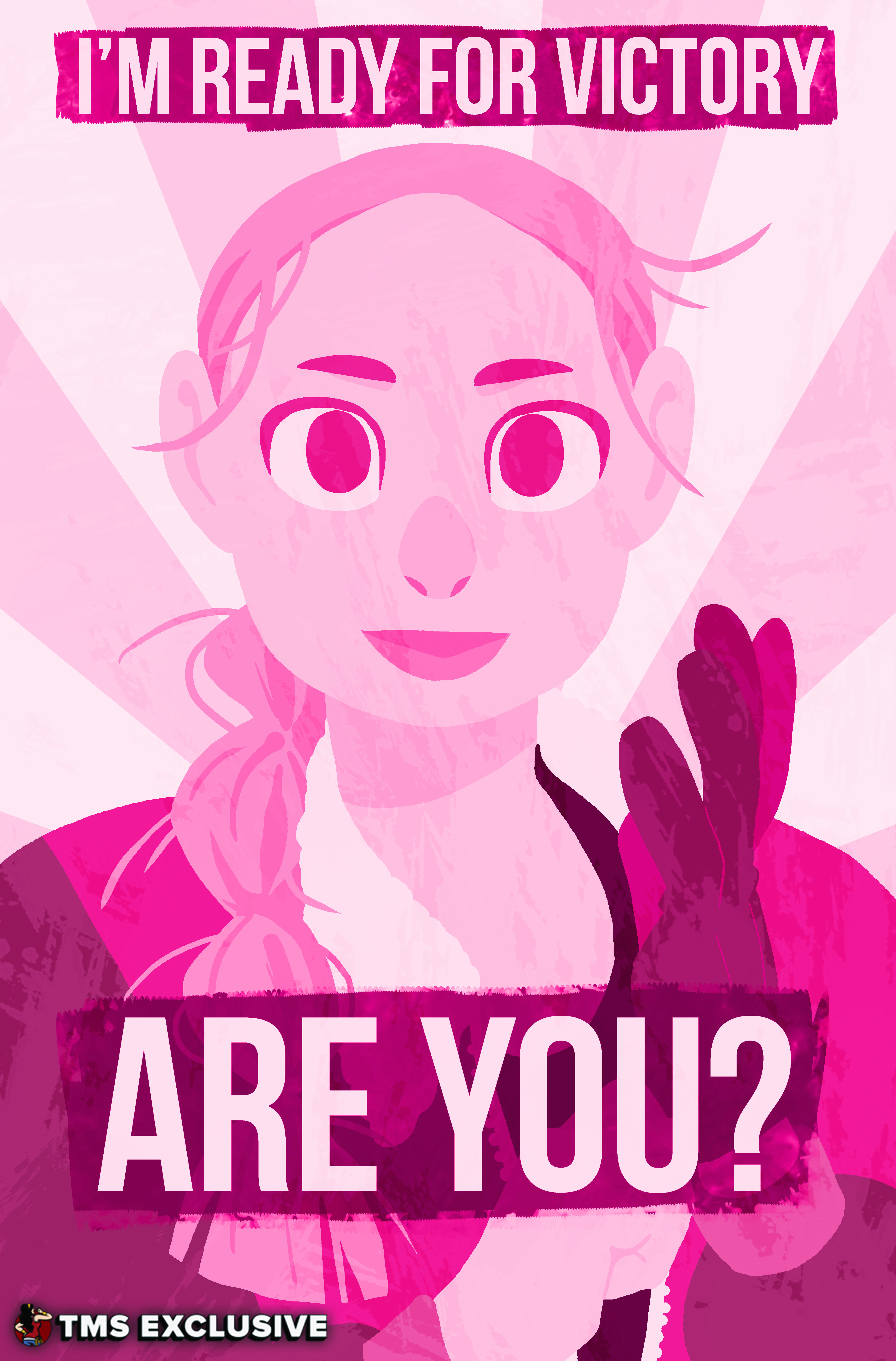 A butt-kicking princess, a cat with a bow and arrow, and a fearless female fighter pilot: during their panel today at San Diego Comic-Con, Oni Press announced three new titles from a diverse line-up of comic creators, and The Mary Sue is pleased to be able to present exclusive previews and interviews for each.

The hero of writer and artist Natalie Nourigat’s Over the Surface is Ava Lefevre, an aspiring fighter pilot undeterred by the fact that her fictitious country of Solvera refuses to allow women into its Army. Nourigat told TMS via email that Ava is “an amalgamation of people like Bessie Coleman and Amelia Earhart. She loves flying, she’s good at it, and she knows better than to let anyone else define her limitations, especially on the basis of something like gender.” 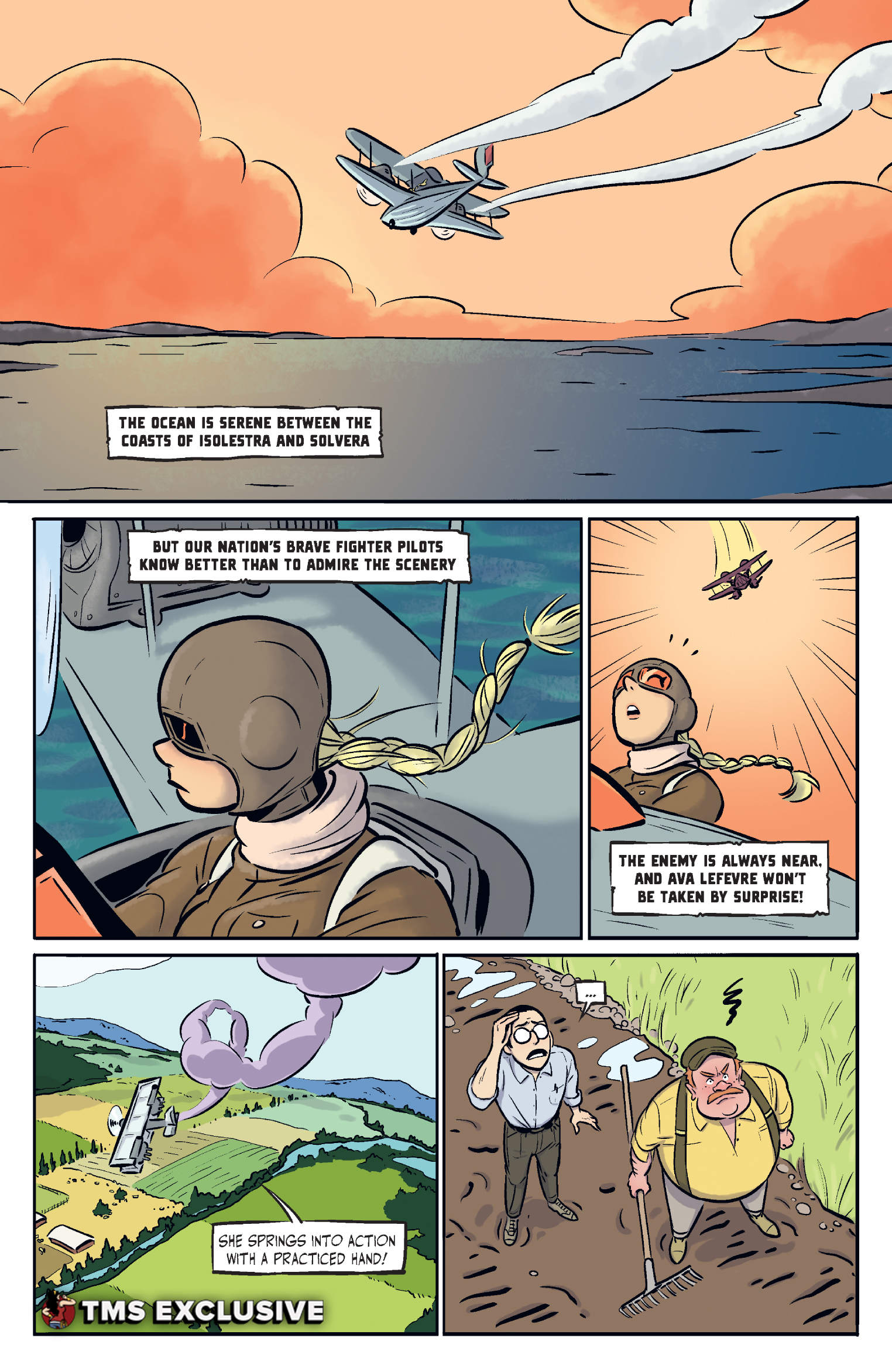 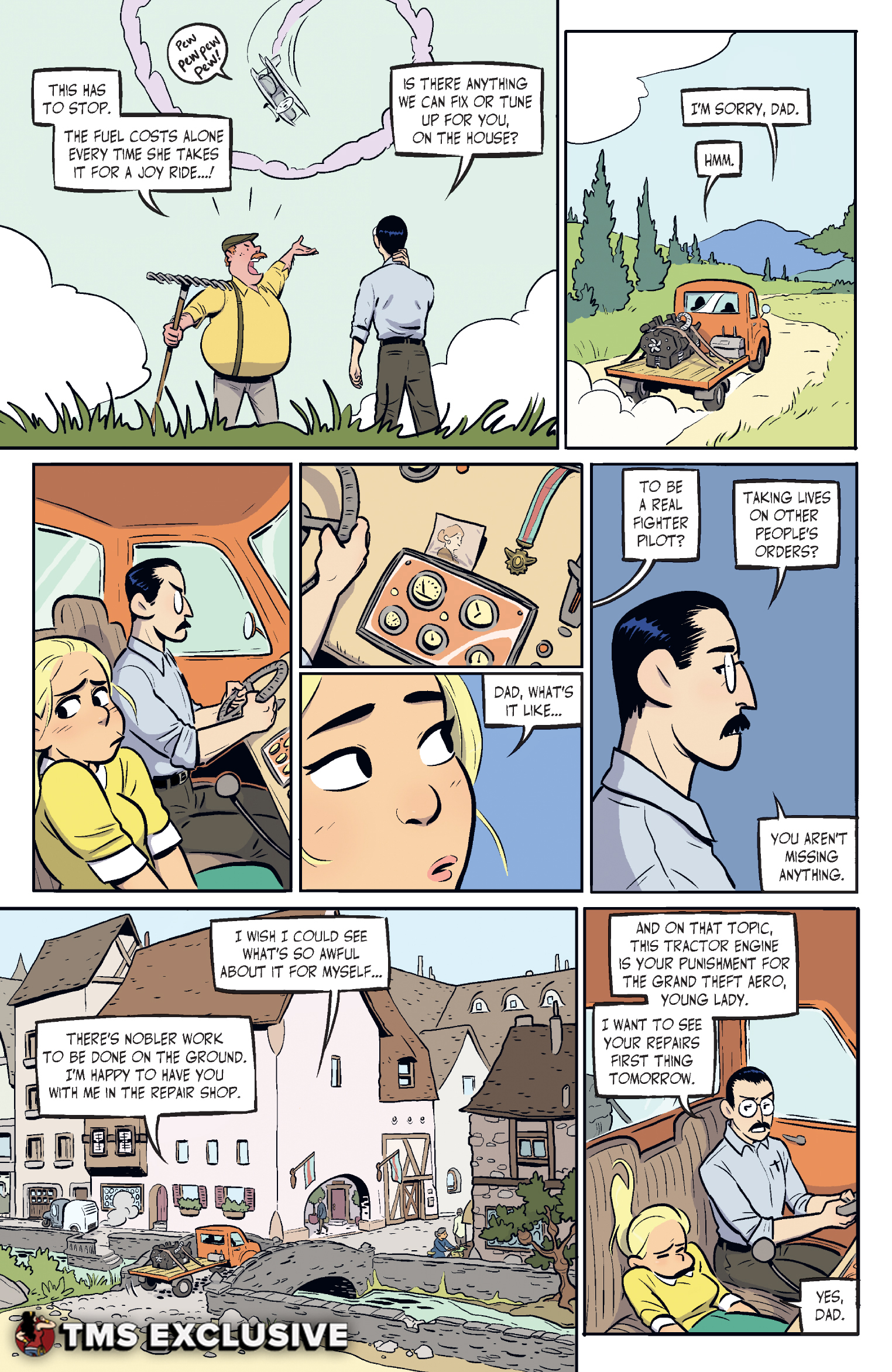 Nourigat explained to TMS that Over the Surface‘s art was heavily influenced by actual World War-era propaganda:

I knew I wanted Ava to be an aspiring war-time pilot, but as I thought more about her motivation and the elements at play in her country’s conflict with a neighboring country, I became particularly interested in how military recruitment operates, what effect combat has on pilots, how technological advances have affected warfare and people’s conceptions of combat, etc. I looked to history for examples of how different scenarios have already played out in our world, and especially how they are reported and perceived by the general public. World Wars 1 & 2 have pretty fascinating trends in propaganda and reporting that gave me lots of ideas for what I could explore in Over The Surface. I’m horrified and fascinated by the idea that war efforts need marketing teams; that citizens need to be sold on a war in order to support it.

The Mighty Zodiac, written by J. Torres with art from Corin “Rin” Howell, concerns an entirely different type of army. Here’s Oni’s synopsis for the title:

When six stars fall out of the sky and fall to earth, Master Long sends a message to his students, all members of the Zodiac Clan, to collect the stars and return them to their base. However, the Moon Rabbit Army is also after the stars, and will stop at nothing to make sure they don’t get back to Master Long – even if it means snuffing them out. It’s up to the Zodiac Clan to not only collect the stars, but protect their ailing Master Long from the Moon Rabbit Army’s might.

As Torres told The Mary Sue, “who doesn’t want to see a dog wielding a samurai sword and a cat with a bow and arrow take down some rabbit invaders from the moon?” Torres’ love of Avatar: The Last Airbender and Usagi Yojimbo influenced the series (while Howell says she took some inspiration from Disney’s Robin Hood and Guarnido’s Blacksad), but the title clearly has its foundations in the Chinese Zodiac. According to Torres,

Zodiac means “circle of animals” and The Mighty Zodiac are a clan of animal warriors based on the Chinese Zodiac who act as peacekeepers, defenders of the weak, righters of wrongs. While other myths explain why those particular twelve animals were chosen to be in the zodiac, we have our own explanation and backstory as part of our world building. It’s a big, diverse cast of characters who have been fun to flesh out and make distinct and entertaining in a sprawling world of magic and fantasy and butt-kicking action.

Our story opens with the death of the Blue Dragon, one of the four guardians of the sky. With his passing, seven stars fall out of the sky and with that comes a darkness that threatens to destroy The Mighty Zodiac. Those stars will help the Zodiac return order and light to the world unless the Moon Rabbit Army gets to them first! 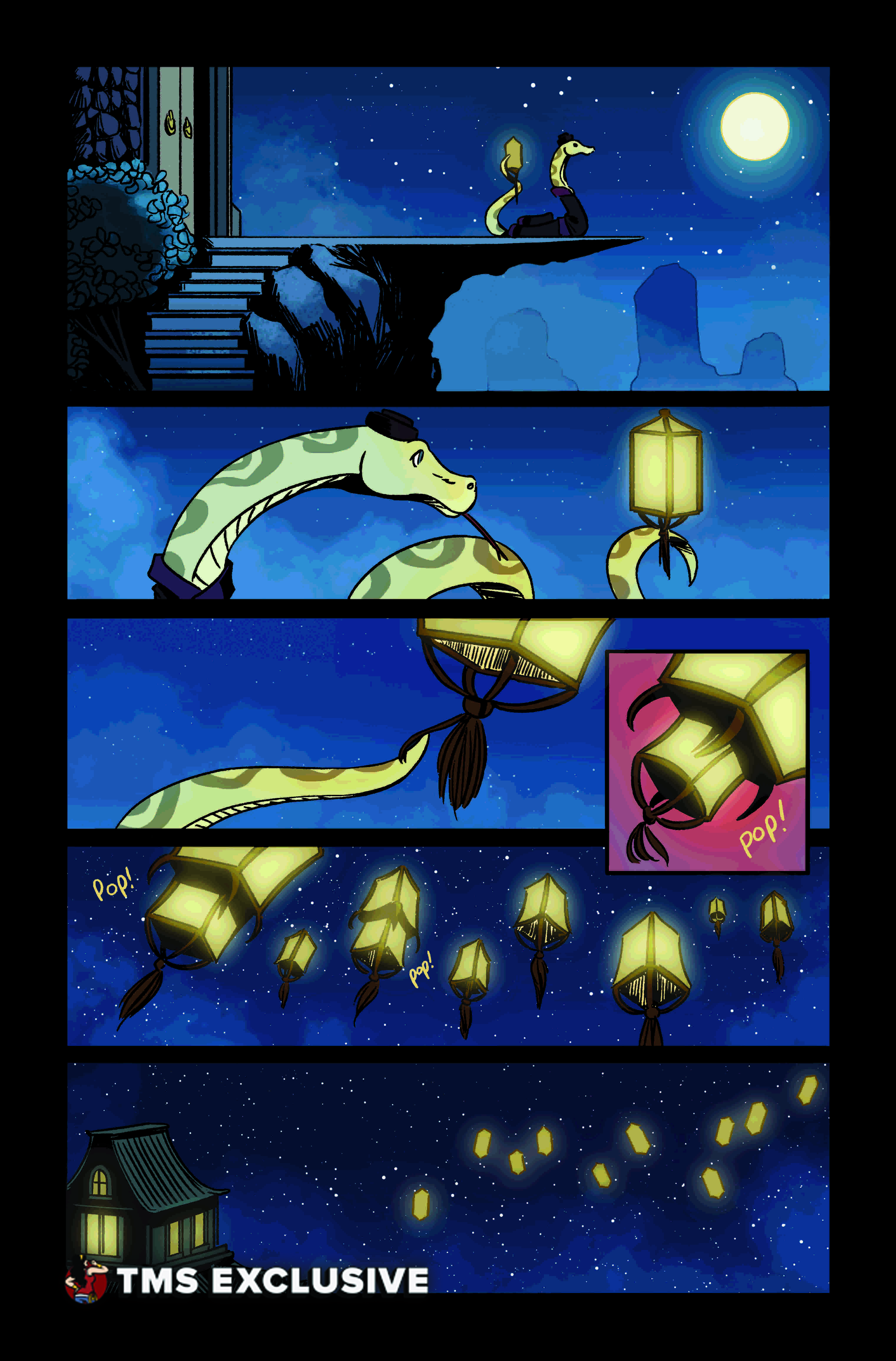 Another Castle, from writer Andrew Wheeler and artist Paulina Ganucheau, tells the story of a very unconventional princess who, in Ganucheau’s words, demonstrates that “femininity isn’t weakness”:

As a kid my princess dolls never needed saving, they did the saving. It was their job to slay the monster. Seeing a book reflect that and to be actually WORKING on that story is a childhood dream realized. My part in this comic is for that little girl inside of my heart that knew her princess dolls could punch the great evil into the sky and save the kingdom.

I think it’s a really important choice. A lot of times when people create strong female characters, femininity is seen as detrimental or less than. I don’t agree with that. Femininity is strength. It’s power. Like when people say pink is girly, as if it’s a bad thing. Of course it’s girly and girls RULE! I don’t want to diminish that. Pink powerful princesses for life.

Wheeler explained that he was inspired to write an atypical princess story because the damsel in distress trope is “so ripe for subversion! It’s embarrassing that this cliche, this idea that the role of the leading woman in so many stories is to be saved by a man, is still so prevalent. And if the idea won’t die, well, we’ll keep twisting it until it breaks. We’ll keep mocking it until it’s so embarrassed that it shuffles away.” 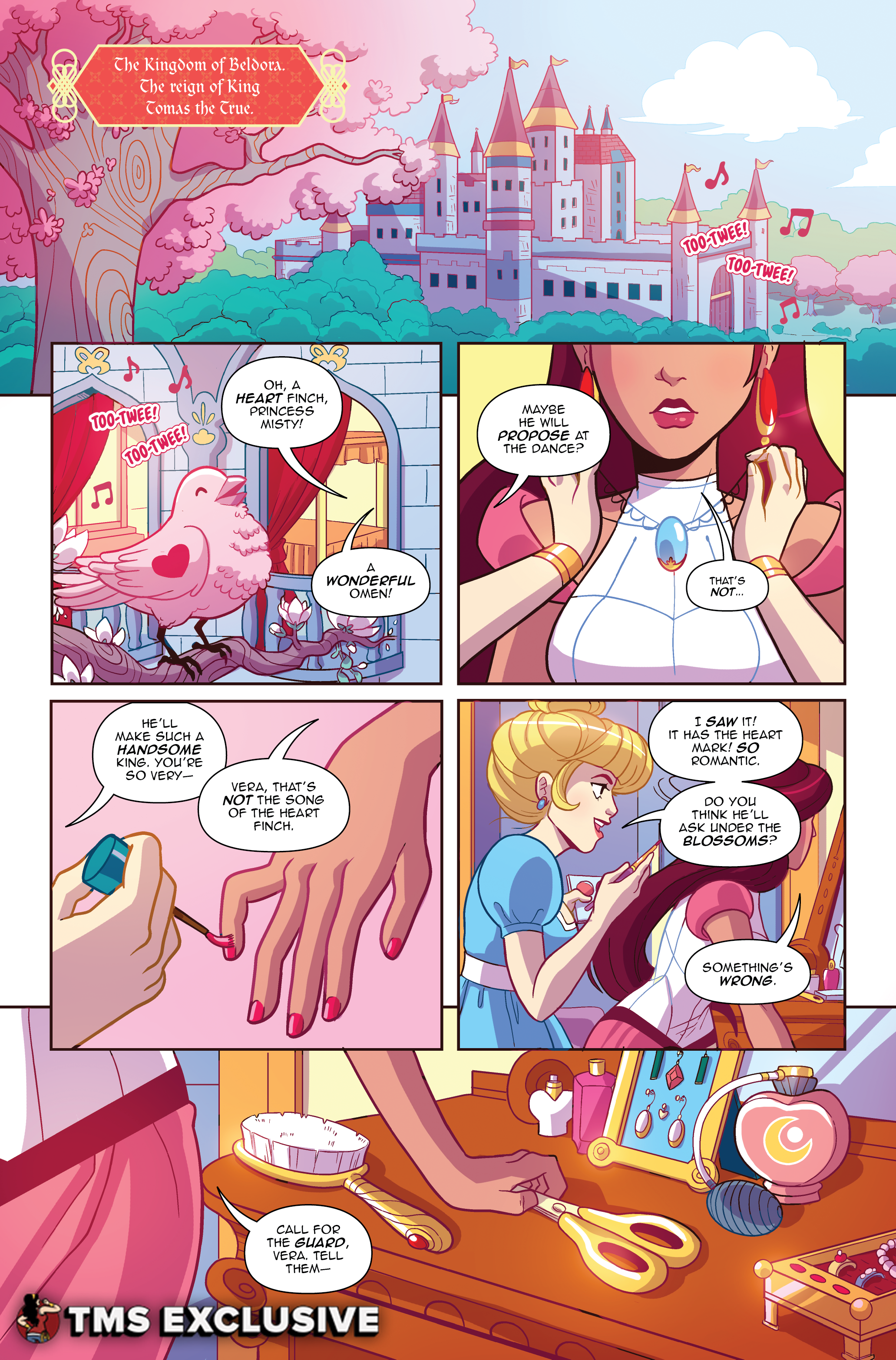 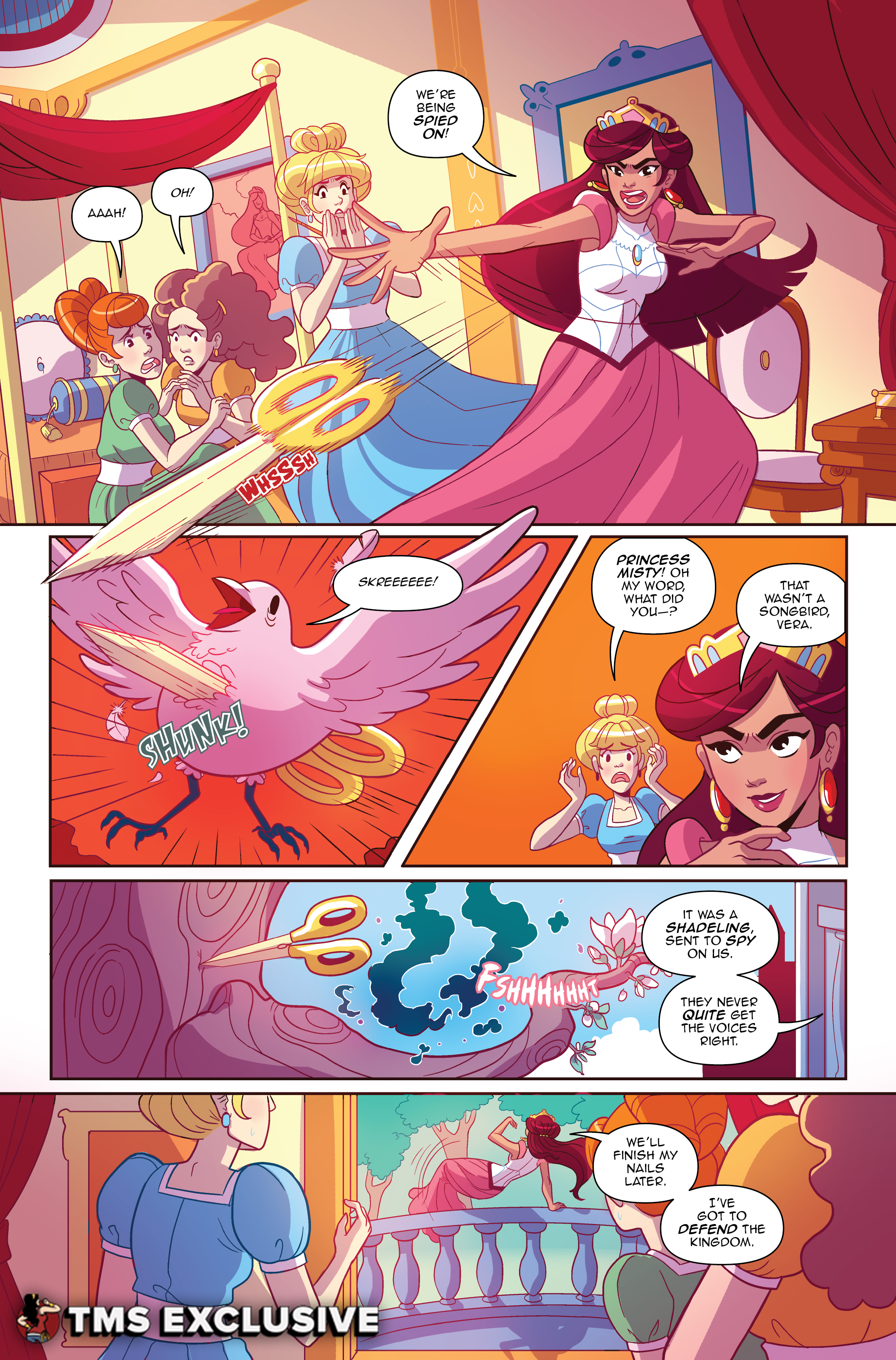 It’s heartening to see Oni’s newest titles demonstrating the imaginative, important, and highly original stories that diverse creators have to tell. As Nourigat explained to TMS,

I think it’s extremely important (and rewarding!) to seek out and read the writing of people with different experiences, identities, and beliefs than our own. Part of being a human being on this planet is making our best effort to understand one another. When we write, we can show people the world through our eyes, and invite them into our experience, which they might NEVER have access to otherwise. I love autobiography for this reason, especially from people with different racial, cultural, and sexual identities than my own. It’s a really intimate look at a new experience of the world, a new point of view, which gives me a slightly better understanding of the whole picture. Who wouldn’t want to pursue better understanding the world?

Or, as Ganucheau puts it:

Women are underrepresented in all forms of media and in an industry dominated heavily by male characters and creators, the books written by women or drawn by women or staring women give a new perspective and sensibility on things. Do you want to read the same stale stories over and over again? I sure don’t.

Neither do we. What do you think of Oni Press’ newest titles?