Once Upon a Time In Conversation: Season 6, Episode 7, “Heartless” 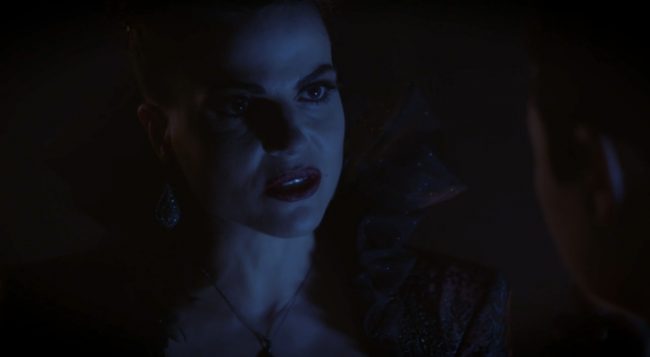 Last night’s episode of Once Upon a Time, titled “Heartless,” is not about the video game Kingdom Hearts as the title might imply, but is about changing hearts… and kingdoms… and evil queens. You know, typical Once Upon a Time stuff. If you’re all caught up on the show, hop in for some spoiler-stacked discussion!

This episode’s flashbacks show us young Snow White, during her living-in-the-woods time period, getting hunted down by a woodcutter who was hired by Regina. Meanwhile, young David in this timeline is worried about his family keeping his farm because they’re running low on money. The two run into each other; David saves Snow from the woodcutter, but she won’t let him see her face, since she’s a wanted criminal and all. Apparently, this is the actual first time they’ve met each other, because Snow and David’s backstories keep getting rewritten, but whatever. The first time their hands touch during this meeting, a tiny magical sapling grows in the woods, because true love… sure, why not?

In the present-day, the Evil Queen has possession of this magical sapling, and she threatens to destroy Storybrooke unless David and Snow hand over their hearts. They comply with her demands, but there’s always a catch with magical deals, so Snow White ends up under another sleeping curse. David tries to awaken her with the usual true love’s kiss, and it does indeed awaken Snow, but that puts David under a sleeping curse himself. Basically, one or the other of them will always be asleep, thanks to this new curse. It’s because their hearts are conjoined, so now, neither one of them can break the sleeping curse effectively.

Speaking of romantic subplots, the Evil Queen is still with Rumple and still wreaking havoc among the lives of the “good” characters as a result, including the Evil Queen’s other half Regina, and obviously Belle.

Between the magical shears from previous episodes and the new magical sapling in this week’s ep, we’ve got a lot of magical new objects to keep track of this season. What do you think so far?