Once Upon a Time in Conversation: Dark Waters | The Mary Sue

Once Upon a Time in Conversation: Season 6, Episode 6, “Dark Waters” 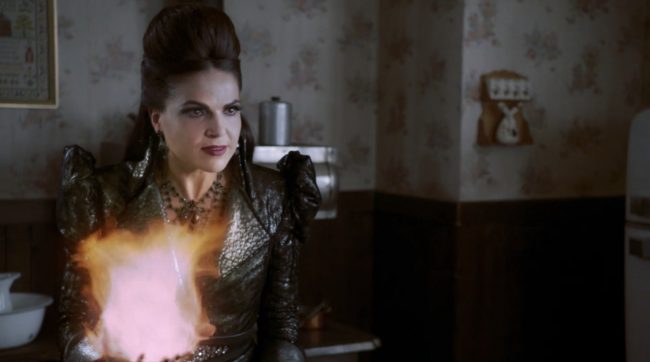 It’s time for our latest spoiler-laden open thread about ABC’s Once Upon a Time! Go get caught up on last night’s episode before you wander into this post and accompanying comment section, obviously.

There are lots of enchanted weapons making appearances on OUaT lately, what with last week’s magic scissors, and this week’s enchanted spear, courtesy of Captain Nemo. Hook ends up in peril this episode’s flashback story; he got kidnapped by Nemo and then had to face off against some dastardly sea creatures (that’s when the magical spear comes in handy). Plus there’s that thing with a knife and Nemo’s half-brother Liam and all the family-related drama. The knife’s not enchanted, as far as we know, but it does serve its Chekhovian purpose, with Nemo ending up on the pointy end.

Back in Storybrooke, Aladdin and Jasmine have to figure out what to do about saving Agrabah. Aladdin no longer sees himself as the Savior, so Emma gives him a Savior-to-Savior pep talk about not ignoring his responsibilities. By the end of the episode, Aladdin decides he wants to take on his rightful role again, but Jasmine tells him Agrabah is gone. So, there’s no kingdom left to save, then? Yikes.

The Evil Queen is still wreaking havoc for everybody in town. She tells Henry that Hook lied to Emma about holding onto the enchanted scissors, thereby resulting in a Henry-v-Hook face-off … all of which ends in Hook and Henry deciding the magical shears should stay hidden. The Evil Queen, of course, manages to get the scissors by the episode’s end, at which point she seals her flirtatious deal with Rumplestiltkin and gives him a kiss to polish it off. Rumple, meanwhile, should really be caring more about Belle’s baby and ultrasound results than anything else, but all this scissors-related meddling has ruined everyone’s priorities.

Nothing like a magical pair of scissors to cut apart a relationship (or several). What did you think of last night’s ep?