Goodnight, Sweet Google Reader, and Flights of Angels Sing Thee to Thy Rest

With apologies to Shakespeare. 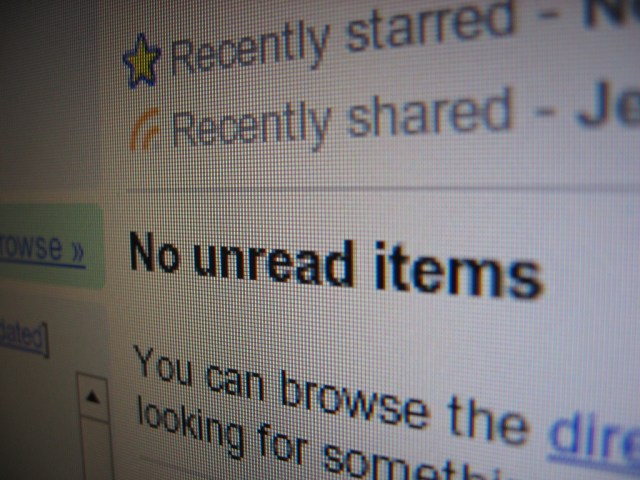 The digital world is full of the discarded husks of formerly useful services. The reasons for their closure are many: Too niche, too broad, too expensive…the list goes on and on. For Google, it always comes back to data. The more data they can glean, the better ads they can serve. Google Reader apparently did not serve this purpose, or did not serve it well enough, and as of tomorrow it will be gone. In preparation of this event, I have written a eulogy to be read at Google Reader’s virtual funeral.

I’d like to say a few words about the most useful of my daily tools, Google Reader — henceforth referred to as GR. See, GR and I have been acquaintances since my high school graduation. I’d long understood that my own thoughts were merely a synthesis of all those I’d encountered, so I made it a mission of mine to consume as much interesting content as possible. Books, video games, music, and yes, even news. It’s in this way that GR was always there for me, and I will miss it dearly going forward.

One of the best things about GR was its implied simplicity. You added feeds, you read your feeds, and you could sort your feeds. Sure, there were other uses for the platform, but these were the ones that it very clearly presented. None of the initially confusing UI and perpetual lack of cohesion that is Google Plus, or the inevitable train wreck that is Google Now. RSS might live on, but Really Simple Syndication has gone out back to die quietly.

GR taught me a lot over the years. Seeing so many headlines churn through gave me a firm understanding of the struggle between content and impressions, how to avoid clickbait, and the importance of not misleading readers. GR also taught me to kill my babies, in a way, and prune feeds that I personally found interesting but weren’t adding anything to my work routine. It’s easy to be told these things in school, or by other people, but they inevitably must be reinforced with experience. This is what GR did for me.

For the apparent minority that are — were — GR’s biggest fans, today is bittersweet. Google is obviously capable of doing whatever they like with their services, and don’t really owe me anything, but the products they seem to consider effective replacements for GR — Now and Plus — hold no interest for me. Trying to predict what things I think would be most interesting is always going to be less effective than me simply doing it myself.

In short, thank you, GR, and the team that made you possible, for your usefulness over the years. I’m sorry to see you go, and you’ll most certainly be the stick to which I measure all RSS readers going forward. You’ve left a void that I know can be filled with something even better, and I remain hopeful that the benevolent dictators behind the tool I eventually come to embrace will not abandon ship at the first sign of trouble.