Study: Ötzi the Ice Mummy was Lactose Intolerant, Has Relatives on Mediterranean Islands 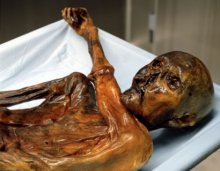 The Tyrolean Iceman, or Ötzi to his friends, was discovered in the Alps back in 1991 and has since then given scientists a window onto humans some 5,300 years ago. Over two decades after his shockingly well preserved remains were found, scientists are still discovering more about Ötzi. Most recently, DNA analysis has revealed what he looked like, where his descendants are now, and what he ate. Or rather, what he didn’t eat.

In an article published today in the journal Nature Communications, researchers announced the results of a mitochondrial genome sequence of our pal Ötzi. Their findings confirmed previous research into the iceman’s genome, and also turned up some interesting findings in their own right. For instance, the researchers believe that Ötzi had brown eyes and brown hair.

The researchers also found mutations on his MCM6 gene, which suggest that Ötzi was lactose intolerant. Speaking to the New Scientist, Albert Zink from the superbly named Institute for Mummies and the Iceman said this might not be uncommon among Ötzi’s peers:

“Maybe at that time most people were still lactose-intolerant,” says Zink. “The change to farming livestock [in Europe] only began between about 5000 and 10,000 years ago and so digesting milk became an advantage.”

That wasn’t the only health ailment Ötzi had to worry about. The researchers also found that he was predisposed to heart disease, which explains the fat found in his arteries.

Looking beyond the Iceman, the team compared the DNA from 1300 Europeans, 125 North Africans and 20 people from the Arabian peninsula to Ötzi. Their hope was to find where people like Ötzi eventaully settled. Their research suggests that the closest relatives to the Iceman can be found around the islands of Corsica and Sardinia.